Heavy Rain, released in February 2010 for the PlayStation 3, is everyone's favorite quick time event simulator. Players are tasked with solving a murder mystery and saving a kid threatened by some pretty heavy rain. Best do it quickly, for the Origami Killer waits for no one. 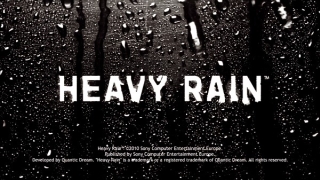 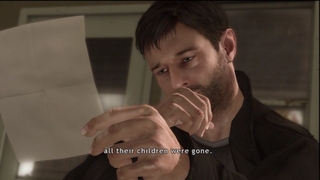 Timing note: This game is manually timed because the in-game timer is unreliable.

If you have the bandwidth and a decent computer, I highly suggest viewing the IQ (720p) version. This run was captured by using the Hauppauge HD PVR.

The tagline of this game is "How far would you go to save someone you love?" and the answer is not very far at all for this speedrun.

Thanks to everyone at SDA and a special mention for Cody Miller who did a single segment run which is the solid foundation this is built on. I would also like to thank Burning_Death for his timesaver with the TV in "Father and Son".

What makes this game difficult to run is the horrible controls and bugs. I had lots of good segments wasted because of this.

It should be noted that in a QTE you cannot mash the correct input or you will automatically fail it. Sometimes this can be useful to cut down on the waiting period.

In certain scenes you can pass some QTE stuff and still fail at the optimum place. This can save time, it just needs to be tested. I do this at every opportunity in this run.

Let's get started then. Since Cody explains the chapters in the below link, I will only list sections I improved on or have something to input. Every chapter is on Easy difficulty unless stated.

You can simply walk away when asked by your wife to help with the bags and immediately go outside and play. You only need to fully turn the right stick once during the helicopter section.

I tried to luck manipulate a good crowd. It sort of worked I guess.

You can switch off the TV around 5:30 (thanks again Burning_Death). You cannot stand next to the TV for two reasons. Shaun will complain you are in the way and the prompt will not show up. Circling around the TV and timing it so the cutscene of Shaun complaining won't show up is fastest.

Cody checked most of Scott's pockets for inhaler. You can simply choose the correct pocket on first go.

You need to do three activities with Shaun for the Leave prompt to show up. Instead of doing the boomerang (it's the longest scene) you can just go to the stand and get Shaun the chewies. Succeeding at the seesaw is approximately 7 seconds faster than failing three times. I also walk far away from Shaun while he gets his bag. He will run towards you this way which saves alot of time.

You do need to turn left for quite awhile and then press R2 once you get inside the house or Ethan will miss the stairs completely.

Only throw the ball at the wall 3 times or the timer actually increases it seems. I walk away from the Chief so he does his "coming or what" speech earlier than just standing at the desk. The wrong music plays once the scene goes over to Ethan. It seems to happen if you are too fast going over to the door and taking the drug.

Easy difficulty comes in handy here since you don't need to do the slow motion input when putting the fallen object back.

I stand at the closest distance I can to still allow the fridge to open. I don't think Cody tested this as he stands next to the TV and wastes time walking down to the fridge. I do this segment on Normal difficulty so I can fail the attack sequence sooner. On easy the motion sensing sequence will not come up and you get an extra chance to not get killed, which is obviously slower. Failing all actions here is faster.

You do not need to check the ticket like Cody does. Just wastes time.

From my testing, Nathaniel will appear faster if you immediately go into another room and then go back to the main room and wait. Cody chose the wrong dialogue when questioning Nathaniel. The Arrest option is longer than the Crucifixes option he did not use.

I retried this chapter once I had completed the last chapter as I had not taken the optimum route on the trial.

You do need to fail certain QTE's here regrdless of how many you pass. For example you could elect to only pass the door swinging QTE and you would still not fail at the soonest time.

I had to choose the No Save option here as when I tried to activate speaking to Gordi the cutscene would not play. I think it is because the game is saving progress. Disabling it fixed the issue. I also only speak once to the goons and then wait for Lauren to sit down. This is slightly faster than interacting with the goons for a second time.

I just keep crawling forward and don't turn around like Cody. This makes Ethan give up slightly sooner.

On Normal difficulty so I can fail to apply disinfectent. On Easy there is no slow motion input.

You can just leave after you find out what you need to do.

Pressing Confide (X) is the dialogue Ethan will say even if you do not speak.

You do not need to check the body. Just simply walk away to trigger the next cutscene.

Again, you can pass certain sequences.

I take an extra second or so to make sure I select the correct leg. Very bad controls here and even Cody selected the wrong leg.

You can simply go inside the building at the start and Jack will come over to you in a cutscene. This alone saves about 30 seconds.

The bugs in this segment are funny. John floats in mid air and calls me a slowpoke even when he is drowning. I reset my PS3 three times and these bugs still happened. It does however auto fail me once I grab onto John the first time which is actually faster. I did try to do the next segment with this since it was so short but messed up the quickturn.

You do not need to look at the Origami figure as Cody says.

You can pass certain sequences again. Shoot the first two guys and then either the top floor or bottom floor guy. Fail all the rest.

There is a slight glitch where you get stuck in the ground for a brief moment if you walk alongside the last section of fence. I run at a spot where this does not hinder me as much. It is faster than going around the obstacle.

That is about it. Thanks for watching.

The difficulty doesn't matter in this DLC, so I chose Easy. The game is patched to 2.0.

The run itself is pretty straight forward. As the previous runner, Greg Innes, already said the controls are awkward and ruined many good runs. The part where Madison is using the barrels to climb into the house is incredibly random. Sometimes the prompts appear immediately, sometimes they don't. I did my best to optimize it as much as possible, but there is still a little bit room for improvement I think.

Up to the part where the taxidermist is coming back, the run is almost identical to Greg's run. The only real improvement possible becomes available after he arrives. Instead of going downstairs and entering the chase sequence with him, it's faster to just climb out the window near the staircase and escape that way. Better ending too ;)

That's pretty much it. Thank you for watching.