Released on October 24, 2003, Hidden & Dangerous 2 is an impressive tactical shooter for the PC platform. The game immerses the player in a series of WWII SAS commando missions behind enemy lines to sabotage underground military complexes, air fields, ships, submarines, and general operation, to capture key Axis personnel, to steal secret documents, and to rescue allies. Due to the overwhelming opposition in each mission from 1941 Norway to 1945 Czechoslovakia, you will find out why people called it a "sneak shooter." 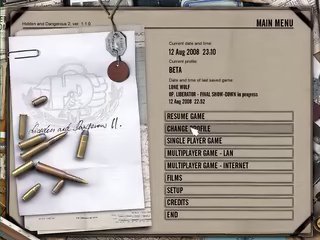 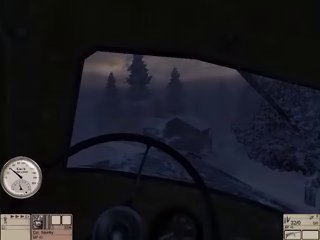 The colonels' meeting in the SAS headquarters office concluded in a bit of a panic. "Where is private Saunby?" - The General yelled at his secretariat as he appeared in his office door. Everyone looked at him, stunned. What could possibly have broken loose if he wanted no less than Saunby?

"Sir, errr.... he's not in his quarters. We think he's probably running his usual thirty rounds around the training camp", one of them replied, shaking.

"I DON'T CARE! This is a bloody emergency, you understand? Find him and bring him right here." The General was clearly furious. All quickly fanned out. Several minutes later, one of them finally found and brought back the missing soldier.

"Sir, private Saunby at your service, sir!" - The soldier followed him through the front door.

"Friggin' finally." - the General eyed him up and down. - "Wait a minute, were you really running? How come this one is panting and you are not?"

"Sir, I was just getting to my twenty-sixth lap."

"Right... Follow me into my office. And close that damn door behind you, this isn't a public discussion. There. Listen James, how long have we known each other?"

"Well, sir, you took over this office two days ago..."

"Right.... never mind. We've just received reports of a developing emergency. The bloody Nazis have launched a new wave of attacks so we've got to step up. I'm sending you on a mission to Norway, then North Africa, Burma, France, Austria and finally Czechoslovakia. You must stop them, do you understand?"

For a while, you could cut the silence in the office with a knife.

"Oh.... well I'm not saying I'm not surprised... But, this is what I've been training for, sir" - James readjusted his gear as he recomposed himself. "Who else is joining my commando?"

"No one. Secrecy and efficiency requires that you go in alone. Your plane is already waiting for you."

"That I can arrange. But you need to hurry. You have ninety minutes for all of this."

"NINETY minutes, are you cr.... I mean, Sir, yes Sir!" - James had to recompose himself for the third time since he came in. "Can I at least make a quick phone call? I must cancel a previous arrangement. I was just going to begin my furlough tonight."

"You can, but only on your own time. That 90 minutes began when you came in, you know. Now go."

On his way out the hallway, Saunby dialled the emergency phone and softly spoke into the receiver. "Darling, I have to cancel tonight. I'm being sent on a series of missions. I promise I'll bring you back a souvenir, all right?"...

Welcome to Hidden and Dangerous 2 - Done Quick, my second SDA run. Since I finished my KotOR speedrun a few months ago, I kept wondering how different it would be to run another game that is new on SDA -- one without a precedent and needing a lot of original research. Well, it's challenging, and it takes a long time. But it's also great fun. I never thought that a game which can keep players entertained for weeks can result in such a relatively short run.

For those who have played this game before -- I've got to warn you that speedrunning style is very different from the way the game is normally played. HD2 offers extreme immersion and requires constant sneaking. The goal of this speedrun is entirely different. I have created the Hidden and Dangerous 2 Speedrun forum topic to explain some of my methods and tricks. There you'll find general information, as well as important details about the most challenging missions.

For those new to this great game, I've also provided some basic information in the aforementioned topic to get the most out of watching my run. In addition, I linked a picture there to help you decide which quality to download.

I'd like to thank the verifiers, Mati and HOC for helping my speedrun see the light of day. Couldn't have done it without you! Thanks to doctor Michael Axmann for his extensive help in Campaign 2 Mission 4, "Operation Nomad: Caravan". You'll see... :) Greetings to Will Sanders, author of the Sneakshooter series. Those great H&D game guides are saturated with fun and the love of the series. And finally, I thank God for using so many spirited men and women -- in WWII and in other wars, as well as to prevent such conflicts -- to save humanity from completely destroying ourselves.