Released in October 2002, this stealthy shooter was much improved from its predecessor, Hitman: Codename 47. In this title, stealth is key, but annihilating any resistance is also acceptable. This is the first Hitman game to use ranking based on stealth and aggression. If you're quiet enough, sneaky enough, and keep kills to a minimum, you can gain the fabled rank of "Silent Assassin"! 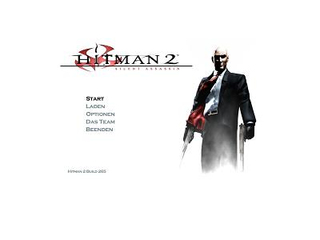 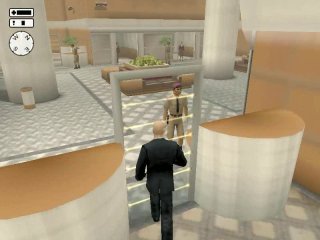 Timing note: Run times are calculated by adding up the times of the first 19 levels, then manually timing the final level.

If you don't want to download it, this speedrun is available on YouTube but I highly recommend watching it on SDA for a better quality.
Link to the YouTube playlist containing all the segments: http://www.youtube.com/playlist?list=PLF92B1A38A6EF9481

There is two main tricks that I will be using very often:

I'm comparing this run with my previous submited one (32:15), so this is why I'm talking about how much I saved on every segment.

#01 Anathema (0:49)
I saved 2 seconds from my previous run.
I don't think this time is beatable unless a new route is discovered.
This mission is all about having luck to get the car key as fast as possible, which went perfectly well here because the guy came in the stairs.

#02 St. Petersburg Stakeout (2:16)
I saved 3 seconds here.
The only trick of this mission is to let the guards in front of the building fire at you because it scares the guy inside the building and it allows you to kill him in the stairs, which is faster.
I only changed my route a little, I don't enter in the building anymore. I don't even know why I was doing it in the first place.
This is flawless, not a single mistake has been done.
Unbeatable unless a faster route is discovered but I highly doubt it.

#03 Kirov Park Meeting (1:13)
Awesome improvement here, I saved 72 seconds!
This new strategy is really fast, no more waiting. (Thanks to 66HardcoreGamer66 from YouTube who told me about it!)
For some reason the second target dies automatically so I only need to blow up the car of the first one.
I still picked up the sniper rifle because I need it for further missions.

#04 Tubeway Torpedo (4:17)
5 seconds saved here.
I'm very happy about this segment because I was aiming for 4:18.
I have a new mouse with a working mouse-wheel so I can pick items and do various things faster than before. (I use to select things with my keyboard, so a mouse-wheel is really faster.)
Very good time, not a single mistake here.
Dropping the sniper rifle doesn't prevent me to use it later because I finished segment #3 with it so I will be able to select it for further missions.

#05 Invitation to a Party (1:34)
Saved 2 seconds.
Same route as my old speedrun, but a bit faster.
Everything went perfectly as expected.
I shoot through the doors with the Ballers to kill my target who is running on the other side.

#06 Tracking Hayamoto (0:18)
I saved 2 seconds, which is awesome considering that this mission is incredibly fast.
I need the first two guards to fire at me very quickly because it fears my target who will start to run so I can catch him faster. It also makes the other guards open the door for me.
I no longer wait for the guy to run closer, because sometimes he keeps running even when I'm coming for him.
I have the sniper rifle from segment #3 in my inventory because I need it for segment #8 and I won't be able to select my weapons until segment #10.

#07 Hidden Valley (2:25)
I saved 6 seconds on this one.
I changed my route, I no longer go underground.
I have to disguise in order to avoid snipers and then I just run to the exit.
I'm killing one more guard because for some reason this one doesn't check my ID most of the time, he fires at me directly.

#08 At the Gates (1:53)
Only 2 seconds saved, but my time was already good so there wasn't much I could do.
I kill the first guards with the sniper now, only because it looks a lot better than spraying bullets with the pistol.
My route was the same as the old one, just done a bit better. I don't think I could improve this more.
I got a perfect sniper shot on the engine and didn't make any mistake so it went really well.
The sniper shot destroys the engine powering the lasers at the entrance of the building so it allows me to enter without triggering the alarm.

#09 Shogun Showdown (1:22)
Another huge save here, this is 21 seconds faster than my old record.
I'm using a new route which is a lot faster but harder because I can easily die while jumping at the end.
This mission is really hard to speedrun, there's a lot of doors, guards and stairs.
This run went insanely well, I was aiming for 1:23.

#10 Basement Killing (0:53)
I only saved 1 second here, this is the same route as before.
I tried really hard to get 0:52 but it doesn't seem to be possible.
Very clean run overall.

#11 The Graveyard Shift (1:13)
I discovered new tricks that saved 2 seconds from my previous record.
This time is gold, I'm very proud of it, there's no way it can be improved unless by using more tricks that I'm not aware of.
The first new thing about this run is using a silencer to kill the first guards so when I fire in the window it makes the tech guy running out of the room when I'm close to it, so I don't have to waste time opening the door.
The next trick is facing the door while planting the hack device, so when the animation is done I'm directly in front of the door and I can go out faster.
The last and most important thing about this run is the escape, which is faster this way.

#13 Murder At The Bazaar (0:27)
I'm very happy of this new time, 7 seconds faster than before!
I tried a lot of different routes and came up with this one which is amazing.
The first two shots are used to make the first target get out of the building by the front door.
I don't even enter anymore and while I'm waiting for the guy to get out I'm killing the other one, and then I run and pick up the two items.
Also got a very clean end, killing all 4 guards with one shot each.

#14 The Motorcade Interception (1:05)
Once again I'm using another route, saving 6 seconds.
The only difference is that I'm climbing on a building which is closer to the sniper rifle, so I'm wasting less time.
I thought it would take me hundreds of attempts to get this sniper shot but in fact it wasn't very hard, I got it pretty fast.
As always, I'm climbing on the roof at the beginning because it triggers the arriving of the motorcade.

#15 Tunnel Rat (1:12)
I discovered a completely different route which took me 16 seconds less than before.
I clear the surface before going in the compound so I don't have to spend time in the elevator.
This time I picked up the M60 because it must be better than the SMG for the last mission.
When I kill my target, since the cargo is already secured in the surface all the objectives are completed and the mission ends instantly.

#16 Temple City Ambush (1:24)
I changed the place where I meet the agent and managed to save 17 seconds.
This mission is a pure nightmare for speedrunning. Everything is about luck.
I now meet the agent between the exit and the assassins I have to kill, which is faster.
After countless tries I finally got a setup where I could meet the agent at the best place and kill the two assassins quickly.

#17 The Death of Hannelore (1:15)
I couldn't find a route fastest than the one I was using before, so I only saved 2 seconds.
The only hard part is to bring the corpse in the room fast.
I kept the M60 because it will be very usefull for the next mission.

#18 Terminal Hospitality (1:16)
New route here, saving 8 seconds.
The M60 wasn't so usefull because I no longer go in the building so I don't really have much guards to kill, but it's still a damn good weapon. And I like big guns.
The main thing here consists in firing before entering the basement because it makes the guards get out and open the doors for you. (One door is locked, and another would require to pick the lock)

#19 St. Petersburg Revisited (2:15)
Same route than before, with a little difference that saved me 3 seconds.
I no longer pick the Deagle from Mr.17 so I have to get lucky and survive at the end, which went insanely well because the first guy with a shotgun got killed by his mate behind him and the second one didn't hurt me enough to take me down.

#20 Redemption at Gontranno (0:54)
Here we are, the last lovely mission, that I improved by 17 seconds.
First, I planned to use the M60 because it's very powerfull and I don't have to reload with it.
But I realised that I can save a lot of time by killing the first guard with the fiber wire and picking his weapon because I don't have to waste time running to take a weapon and come back.
Besides the beginning, the route is pretty much the same except that I come down at the end to kill Sergei faster.

Have a nice day!