Released in December 1991, Home Alone is based on the movie with the same title but has little in common with the original story. Kevin plays through four levels collecting jewelry, toys, electronics, and pets while avoiding Harry, Marv, and other burglars. Once enough items are collected, Kevin gains access to the basement where he encounters the terrors of rats, bats, ghosts, and spiders. 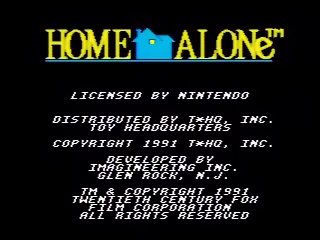 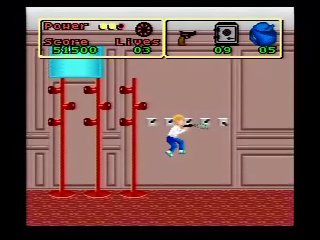 Here is a nice little speedrun I put together for the SNES version of Home Alone, my first run for SDA. There wasn't anything about speedrunning for this game before i started this run, so all strategies came from my own planning. I spent about a week on this game and the final result is a run that is nearly flawless.

The trick to beating this game quickly was figuring out which items to get and which items to leave behind. Every level contains 4-5 items more than are needed to gain access to the basement, so i had to figure out which items would take the longest time to get and leave them behind. Another important factor was figuring out when to actually drop the items down to the basement. I changed my item route many times until i finally came up with what I believe is the optimal path.

The game overall is really easy, except the final boss can be a royal pain. He has no predictable movements, everything he does is random ... so a good run up to the final boss means nothing unless you get lucky with where he decides to go (for those of you who have played this before, you know what I'm talking about). Thankfully, I was able to get a perfect battle against him in this run.

Here are a few noteworthy parts of the run ...

I figure this game could be completed 4 seconds faster, but the time I got would be hard to beat. This is a very clean run and I'm happy to finally have my first speedrun done!