This platformer puts you in the shoes of Hudson Hawk, cat burglar extraordinaire. You need to prevent an economic disaster when evil people threaten to bring about the age-old alchemist's daydream of turning lead into gold in bulk. In order to do this you bumble about a lot. 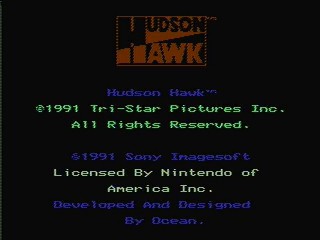 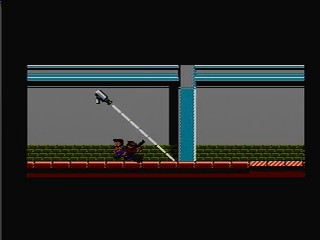 My history with this game started over 20 years ago. This game was one of the 10 or so games at my Grandma's house and we would play it occasionally when we went over there. I'm pretty positive that we never even got past the very first screen back then, and after beating it recently it's not surprising. This game controls like ass. You can only jump one tile high and in order to clear any size gap you need to gain a good amount of momentum or you just can't make the jump.

After I was finally able to beat it I thought this game would make a good speed game. Being able to harness a character as unweildy as Hudson Hawk took a good amount of practice, and he still screws me over from time to time. It appears that literally no one else runs this game, so I was pretty much routing it all by myself. I discovered a number of glitches, included the super useful double jump.

After posting a video of the double jump, ktwo commented on my thread asking about how to do it. I had no idea, I was just randomly mashing and it was really inconsistent. After looking into it on emulator he figured out exactly how to do it. You hold down B to punch and 3 frames before the punch animation starts you hit A to jump, this boosts you up a small amount and then you go into your falling animation and you can reach platforms that are 2 tiles high. It is useful in several spots in the run and saves a large amount of time, but it is a one frame trick. Ktwo also pointed out an old TAS that I was able to take some strats from.

So obviously a huge shoutout to ktwo, this run would be much slower without his analysis and insight, he helped knock a huge amount of time off the run.

Health is always a concern in this run since it does not refill between stages and you can only see it when you pause, so if you see me pausing slightly it's probably to avoid damage.

Onto the run comments.

Level 1 - Right off the bat you get to see the first double jump to skip the box puzzle and get right to the window. In the next room I set off the alarm intentionally because it's hard to avoid and you can get through the last camera in the room faster. Same deal for the next room.

Now the air ducts are a particularly annoying part of the run, all the steam jets are one hit deaths. I believe the jets have 3 different patterns they can have, and it appears to be totally random. I use a death abuse to take me back to where I last entered the room to save at least 5 seconds. Then the rest of the ducts is just optimizing my movement through all the patterns.

After the ducts I avoid the alarm in the first room because it's much easier to get through the cameras at regular speed, and it's not worth to risk to save a second or 2. Then comes the gun room, 4 enemies with guns, all whose shots are random each time. It's very important to not get shot because you need as much health as possible to make it through the rest of the game without dying. I only got shot once, which was decent luck. I avoid the alarms in the next room and get through the final room to finish the level. The run is pretty much perfect up to this point, half second loss in the ducts but that's it.

Level 2 - Once again a double jump right away, takes me 4 tries to get but it probably still saved time over another box puzzle. The rest of this screen was kinda sloppy but didn't really lose much time.

The sewers are the most dangerous part of the run, this is where you can take a lot of damage and getting shot earlier can take it's toll, since health does not refill between stages. I get super lucky and neither of the red balls hits me, which is pretty uncommon, usually one hits me. I mess up a ladder jump and have to come back up a screen to get my usual pattern, probably cost me 2 seconds. Avoid the one hit spears and make it out. I took very little damage which plays out great for the rest of the run.

The roof is pretty good, just avoid the enemies and get inside. Now the most tedious part of the run, you just run back and forth killing enemies and avoiding bounce and electric pads. I get good luck with only one enemy dropping a bomb. Next room is more of the same. Standing on the floor of the very bottom level lowers the cage holding the Codex at the end, so if you're on the floor too long it closes and you die. But I figured out if you just keep jumping along the floor it doesn't register you on the floor. Really good level, lost 2 seconds in the sewers and tiny bit at the very end.

Level 3 - Another double jump right at the beginning, takes me 7 tries to get it but that still saves time over the intended route. Then a bunch of platforming, I miss a jump onto a ladder, costs me maybe a second. I lose another second in the 2nd to last room, I play it safe and kill that guy, sometimes he kills you if you're at low enough health and you just run past him. Then another double jump to skip a box puzzle, I got it on the first try so it probably saved at least 7 seconds. In the final room I use a strat ktwo came up with, it's super fast and I hit the last double jump on my first try, great finish. Good level, lost a lot of time on the first double jump, and I miss jumped on one ladder, but awesome stage besides that.

Overall a super solid run, and one that I would have a hard time taking down. With an absolutely perfect run I think another 5-10 seconds could come off with the current strats, my sum of best is 7:41, but this is a brutally unforgiving run, so many things are one hit deaths, the 5 one-frame double jumps and missing a single platforming jump can cost you a run. It feels good to conquer this terrible, terrible game, ha. Thanks for watching!