The Incredible Hulk was released in August 1994 by U.S. Gold for Sega Genesis and Super Nintendo Entertainment System. It is a side-scrolling action game consisting of five levels. The goal is to make it through each level and defeat the boss. The Marvel Comics villains featured are the Abomination (who appears as a sub-boss in every level), Rhino, Tyrannus, Absorbing Man, and finally The Leader. 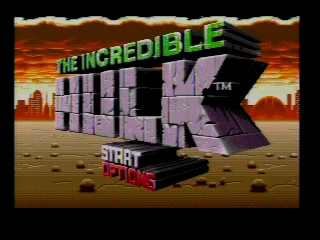 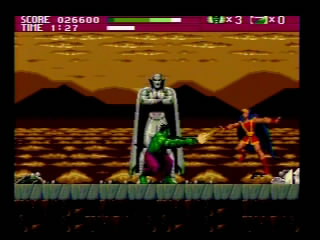 First off, I thank everyone at SDA. (You guys are legit)

I did not play this game much as a kid and I was bad at it. I, for some reason, started to get decent and enjoy the game in fall of 2009.

There are 3 difficulty levels: Easy, Normal, and Arcade. I play on the Arcade setting. The only difference in arcade is that some of the enemies run faster but the enemies all take the same number of hits. Also my run is all about getting the pill to make me "hulked out" (The hulked out meter depletes with time and damage) with this I can run making the speed run a lot faster. To run I need to be hulked out (indicated by the white bar of health) and press ->,->, C, ->. This is annoying and sometimes hard to execute. In the SNES one just has to press the shoulder button and the direction to run, so I would say the Genesis run combination is harder to pull off. I also get health to maintain my hulked out state. Once it is lost you can no longer run and you need to get the pill to get hulked out again. The clap is done by holding A and B at the same time and then pushing C. I use sonic claps on The Abomination because that is the fastest way to beat him.