I Wanna Be the Guy is a freeware PC game by Michael "Kayin" O'Reilly released in October 2007. The player guides the Kid through levels inspired by various NES games as he bests fruit, spike, and moon on his quest to become the Guy. The game is infamous for its extreme difficulty. 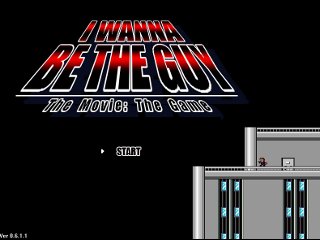 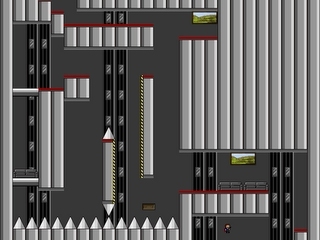 First of this run is a Segmented Any% Very Hard Mode With Death Abuse and Without Restart Glitches (thats a mouthful). I would Like to thank ExplodingCabbage, Arkhanno, BlueStar810 and ZaibirQuild For Making this run Possible. I would Also like to thank Jish for his iwbtg obstical course video on youtube as it was really helpful and I would like to thank that person who posted they 18:43 run of iwbtg on nicovideo and of course the entire SDA staff. Now Lets get to the run.

I would like to say I do realize this run has lag spikes at different points throughout the game. There is ablsolutly nothing that can be done about this. I have cut the beginning and ends off each segment so it is just the run. The first segment timing should start when you first see the kid in the first room and the last segment should end when the last bullet hits the guy.

Segment 1: I get to the room before Mike Tyson. Did it in 50 seconds. Any time lost before I get on the first moving platform does not affect my time in any way. After that it does. There is almost no room for improvement in this segment.

Segment 2: Fighting Mike Tyson and getting half way through the G&G area took longer than I thought do to bad Horrible Hawk Luck. Any Time lost before link does not hurt my time. I'm Pretty sure there is a way to get through the spike corridor 1 room without having to kill the horrible hawks but its still a fairly good segment.

Segment 3: This Segment is the bane of my existance. I probably had more resets here than the actual rest of the game itself due to luck. Basically there is two ways to get through the room after spike corridor 2. Risk the incredibly luck based and precised horrible hawk ride which I have only got to work once. Or take the lower route and bumb rush the thrillers. The thrillers have a 50% chance of spawning in a place you can't bumb rush them and then you need to reset. Its probably a 1-2 seconds slower than the horrible hawk ride but In a very hard run its to precise. I lost about 8-12 seconds on Mecha Birdo do to missing one shot in the first phase and my entire timing for the thirds stage was screwed up. The room with the orb though ended more runs then the luck based thrillers. This is probably the worst of the segments.

Segment 4: There were two screw ups in the ryu room nothing to major probably a second lost.

Segment 5: Probably My favorite segment to record because of tears of blood in the background. This segment is pretty straight forward. Dracula is a very luck based boss and I'm Pretty happy with the time I got.

Segment 6: This segment was almost as bad as segment three. The most precise thing in this whole run is the spike wall jump which I have to do twice.

Segment 8: Ok so I do realise I lost some time by hanging onto the vine. I just noticed this as I was typing this up. Now here is how the kraidgief skip works. You fall into the pit and press 'q' after that the game recreates you without you hitbox in the kraidgief fight just walk past him and you've won.

Segment 9: Getting to the Koopa Klown Kar. Can't be improved upon due to platform positioning.

Segment 10: The Koopa Klow Kar when very well. I probably could have got through the second form if I shot a little faster but I'm happy with hour this fight turned out. The Old factory area I just mess around in and kill enemies to waist time because of the slow moving platforms in the many spike room.

Segment 11: Basically the same as segment 4 only this time I preform the ryu jump which is incredibly precise but still not very difficult. I make the same mistakes from segment 4 as well.

Segment 12: Spike wall jumping again. Not much to say about this one just getting back to the old factory.

Segment 13: Getting to Mother Brain. I don't find this that hard. I did it on my first try. Not much room for improvment

Segment 14: Mother Brain Is just basically shoot as fast as you can on your keyboard and try not to get hit by spagettios or break your z key. The escape sequence had a couple of time waisting double jumps but all together wasn't that bad of a segment.

Segment 15: Nothing needs to be said about this segment

Segment 17: A couple of wall jumps nothing to interesting

Segment 18: Minecart scene. The only form of improvement would be to skip the save and fight the dragon devil but its not too much time lost and this results in a better dragon devil fight.

Segment 19: Dragon Devil. Most boring boss in this game. For those of you who don't know about the Dragon Devil Stage two skip you basically shoot in 25+ times in the first form and its skips stage 2.

Segment 20: Getting through the first half of the guy's castle. Yes you do have to wait for the platform in screen 3.

Segment 21: Hall of former Guys went better than expected. In the break out room I was slowly reaching my finger twards F2 when suddenly the game gave me a break and the delicious fruit destroyed all the important blocks. Gradious skip works like you count the number of bullets it takes to kill the turret boss thing then you shot that many then back into the wall and you will respawn invincible. Invincibility goes away in the in the final tower of the guy.

Segment 22: Final Boss. I apologize for the audio quality in this video. I have the volume at 6% so you would go deaf but there is static for no reason like in parts 3, 6, 12. Anyways first 3 forms was the fastest possible, I hold the record. The second 3 stages could have gone a bit faster with a little more accuracy but that was the fastest I had ever killed the guy so Im happy with it. Credits are a bit laggy but there are just too many instances on the screen.

Once again The framerate in parts is really bad but there is absolutly nothing that can be done about it because the game has put too many instances on the screen causeing it to lag. I hope you enjoyed watching this run and I have nothing else to say.