Released in 1985 by Nintendo, Ice Climber belonged to the first batch of released NES-games in North America. You take the role as a climber who has the sudden urge to scale 32 very deadly mountains. Even though the story is a bit on the thin side, the game offers great game play and a very fun 2p-mode. The game was bundled with the NES in some European countries, which gave it more attention there. While the game never got a sequel, the main characters have been featured in the super smash bros. franchise and the game has also been made available on virtual console. 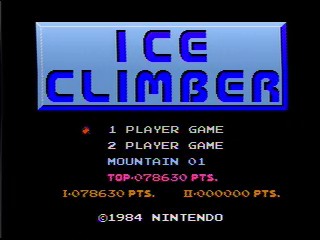 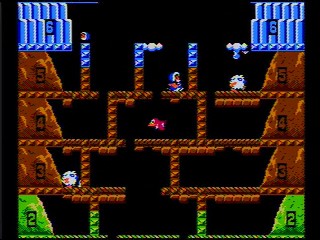 Ice Climber, first thing you use to hear about this game is that it has wonky controls.
Sure they can be annoying and tricky at first but when you get the hang of how they work, you will find out that they are quite accurate.
The hitboxes though are quite weird allowing you to jump through stuff close to edges.

I choose to play this game having seen Badbrakes played it. It reminded me of how hard I thought the game was when I first got my NEs back in -88.
In Sweden, Ice Climber was one of the games that came bundled with your console and I guess that it probably got more attention in Sweden than in the Us.
Haven't really come across more than one or two speedrunners that run it..

Stage 1 - You always want every level to consist of only one layer of ice throughout the game. You also must always position yourself before chipping off blocks in order to make it up through a narrow hole.
Stage 2 -
Stage 3 - First mistake. Did cost me a couple of seconds but I didn't feel like resetting.
Stage 4 - Missed the faster way up.
Stage 5 - Good start with only one layer of ice. Bad timing jumping onto the level 5 cloud caused me to wait for it one more cycle. Grabbing the corn gives you the game's only 1-up.
Stage 6 - Lucky to get a single ice layer on the right side.
Stage 7 - One has to make the jump over the pillar in order to make it to the cloud first cycle. Then quickly make it up to level 4 in order to get a screen scroll. Then commit suicide. Now there is not enough room to spawn anywhere else than on the right side on level 4.
Stage 8 -
Stage 9 - You really want only one layer of ice on level 5 in order to get up quickly. This stage might add many seconds as you have to wait for the clouds to get another shot.
Stage 10- One of the fastest and easiest stages. Made a stupid jump on level 7.
Stage 11- Starting out by moving a tiny bit to right in order to make it up through a narrow hole to the next level. Start running right jumping two times so that I should make it to level 3. When the bird comes from the right you might get there in head of it. I complete fail from me, losing a cloud cycle and a life.
Stage 12-
Stage 13- Made the wrong choise on the first level that maybe cost a few seconds.
Stage 14- Totally missed the fast start, cost me a cloud cycle. Bad rng on this stage as you want only one layer of ice on the right side of level 4.
Stage 15- The level 7 cloud has to be in the correct position when I jump up in order to line up the next cloud. Also the bird can ruin this stage easily.
Stage 16- A stage that may cost you a life as the birds are starting to really get in your way. I die because I think I tried to chip away at level 5 too early. One has to wait some frames allowing the screen to scroll and then jump in order not to move along with cloud. To early and no jump is recognized by the game.
Stage 17- Goes according to plan. Good rng on level 8 ice.
Stage 18- Good rng again with a nice one layer of ice at level 8.
Stage 19-
Stage 20- Good rng at start though I have to wait out the bird before advancing upwards. Once again cloud that have to be synced to be in favor.
Stage 21- Usually the point I try to get to without dying. As I had already died twice I didn't believe very much in this run at this point. Also my time up to this stage could surely have been maybe 15 seconds faster if I had played better..
Stage 22- It's possible to catch the level 4 cloud fast but very hard to pull off consistently. Saves a cloud cycle but the cloud moves quite fast so not much time is lost anyway.
Stage 23- The big time saver. Changed strat and saved like 16 seconds from my pb-run.
Stage 24- Really good rng with no bird in sight from the start. It almost always get in your way.
Stage 25- Good execution. Important to be able to manage two jumps from off the cloud. Also important to face left.
Stage 26- No bird again! The jump from level 5 to 6 can easily kill your run if your timing is bad.
Stage 27- Bad timing at start as I had gotten a bit nervous at this point. Quite a hard jump from level 4 to 5. I have a visual queue where I jump when the small cloud is halfway off screen to the right.
Stage 28-
Stage 29- Missed the fast way up but at least I didn't die.
Stage 30- The most annoying stage. Could have gotten two layers of ice to the right and a bird but this time I got amazing rng.
Stage 31- That bird might kill you if you don't watch out. Stupid mistake on level 5 that made me fall down. Made it back up really nice and fast though. To make it back up you have to run and jump exactly two blocks ahead of the wall.
Stage 32- It's possible to make it up in first cycle but I played it safe. Almost got hit by the bird though, didn't watch out for him at all.