Released in 1986 for Arcades and later for NES, Amiga and ZX Spectrum by SNK Playmore, Ikari Warriors 2 is the sequel to Ikari Warriors 1, a top-down shooter with some interesting character/place name choices. The antagonist is called Zang Zip, for example. What. 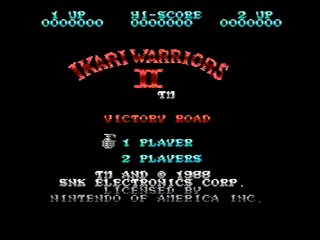 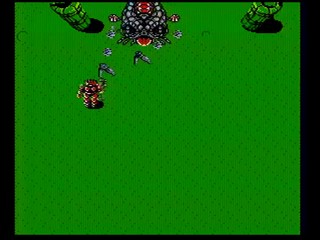 Disclaimer
I did this run on a Powerpak. In case it matters for future reference, I used a ROM with checksum 94edaed6f4a80e27dea80f34d16baf7f.

Speedrun information
For information about speedrunning Ikari Warriors II, go to the sda knowledge base (referred to as sdakb in my comments below):
https://kb.speeddemosarchive.com/Ikari_warriors_2

Improvements
My previous run for this game was without any big visible mistakes. Since then, a few new routes/techniques have been found, allowing the lower time of the new run:

Run comments
There isn't a lot to comment on in this run that's not mentioned in the sdakb. This is an "easy" game to speedrun. I was therefore basically resetting every attempt that had any kind of visible mistake. The end result is therefore essentially a "flawless" run. That being said, there are still minor things that could be improved in many places. The menus are quite unwieldy in this game and easy to make mistakes in. More aggressive menuing could therefore chip away small amounts of time during each menu trip. Same goes with trying to stutter-walk diagonally even more (see the sdakb for the reason) or finding the most optimal line to walk in in every situation.

Final thoughts
I didn't want to settle for a run with any kind of visible execution mistakes. This run achieves this goal. It's the only proper attempt reaching the end. I had two other attempts arriving at the final boss, but missing the quick-kill. The pace of this attempt was the best of the three though. Once my strats were defined and I made serious attempts, my goal time was around a low 7:54, but with the feeling that it would probably feel a bit slow. I was therefore hoping for a 7:53. Getting a 7:52 was therefore a positive surprise. More time could come off by really learning how to optimize the menuing in this game and, to a lesser extent, the diagonal movement and taking straighter paths. Unless something new is found, I don't plan on trying to lower the time further though.