Released in November 1993 in Japan and September 1994 in North America, Illusion of Gaia is an action RPG by Quintet. Part of the Soul Blazer trilogy, the player takes control of Will, a latent psychic who must embark on a quest to destroy a comet at the request of Gaia. It has an NPC with a pet pig in it. 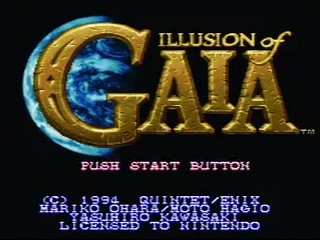 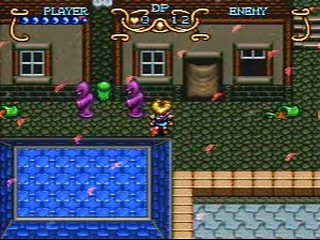 Nitrodon - for teaching me probably 80% of what I know about Illusion of Gaia speedrunning.

Halamantariel - for making the Illusion of Gaia 100% TAS that was most helpful at learning optimal routes through towns/dungeons.

Dessyreqt - for discovering the Fisherman's Jewel RNG manipulation, without which I'd probably be looking at dozens of resets between attempts.

Darkwing Duck, PJ, romscout, fisherrob86, Mecha Richter, RaneOfSoTN, Dragondarch, djtifaheart - for all of the encouragement to keep working on this run on the SDA forum, IRC/Skype, my practice streams, in person, etc.

All SDA Admins – for all the countless things they do for our great site and community.

Last but not least, all of my other great friends in the SDA community (Essentia, Mike Uyama, Mercury.Com, Lag.Com, UraniumAnchor, Carcinogen, Emptyeye, Poxnor, Caracarn, and many others). You all make gaming the social and fun experience that it should be!

Illusion of Gaia was actually the first game I ever speedran, starting in early 2010 after the Classic Games Done Quick marathon inspired me to become more active in the SDA community (before that I'd been watching the runs posted on the site and occasionally lurking the forum since probably 2005 or so). I didn't make it very far in 2010 (just to Freejia or so), but meeting Nitrodon, PJ, and other IoG fans at the first Awesome Games Done Quick marathon in 2011 and talking speedrun strats both at AGDQ and online over the following year motivated me to pick the game back up; and sometime in early 2012 I finished my first 100% run (well over 3 hours and with many deaths). It's certainly been a long journey both fun (especially running IoG for Summer Games Done Quick 2012 with an awesome couch commentary crew) and frustrating (not the least of which was getting a 2:17:30 run a few days ago that I would have submitted if not for a video capture issue)!

Area-specific comments - The Story of Will and his many misdeeds:

Watermia/Great Wall of China - Wherein our hero cheats at Russian Glass, murders his opponent, and steals his inheritance

I would definitely like to eventually improve this run to a 2:15-2:16 (barring discovery of any new tricks/glitches/sequence breaks) by going for a better Moon Tribe Cave battle, cleaning up the few rough execution spots like the Ishtar's Studio Wind Tunnel, possibly skipping one of the herbs, and getting a 3-cycle Dark Gaia battle. All in all though, for a run of this length with the level of RNG some of the game's battles have, I'm satisfied enough with this time for a 1st SDA submission of the game.