The Immortal is an isometric adventure game originally created for the Apple IIGS, which was ported to the Amiga, Atari ST, MS-DOS based PCs, NES, and Mega Drive/Genesis. The main plot revolves around a wizard attempting to find his mentor in a large and dangerous labyrinth. The game is known for its high degree of graphic violence (much reduced in the NES version) along with its punishing difficulty 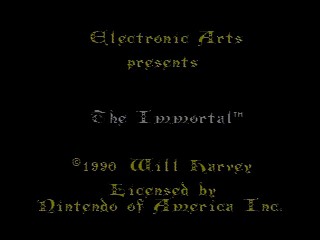 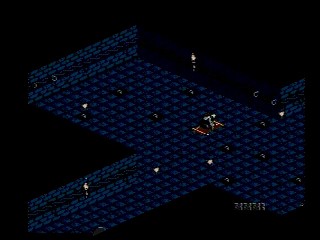 Hello, Boxfat here. This is my first submission to SDA, but hopefully not my last!

I picked up this game in a local game shop last year with vague memories of it being difficult and annoying. I continued hesitating on putting the game in my NES until it was finally requested to be played on my stream. And boy am I glad it was, this game turned out to be a fantastic isometric adventure. Figuring out all of the puzzles and how to fight enemies was rather satisfying, and on top of that the graphics and music were very advanced for the system (even if the framerate is a little low).

My interest in speedrunning this came from watching Tom Votava's run. I used his speedrun as a template, but I made one big route change - I wanted to see just how fast the game could be beaten, period. I decided to go for the shorter ending, which does wind up meaning this run skips out on getting the ring for Ana. We don't get to see any wizardly romance at the end, but that doesn't matter too much considering I sped through the ending text (I had recorded this before thoroughly reading SDA's timing policy).

At one point I had whittled my run down to 12 minutes and 56 seconds. I was really happy with this. At least, until someone informed me of Feasel's interest in speedrunning this game. Apparently, with the better ending, he was expecting a time of 12 minutes and 45 seconds. I was shocked. How could he possibly take a path that adds 20 to 30 seconds to the run AND be faster than me? It was time for some investigation.

After some social engineering - and by that I mean visiting his stream and flat out asking him - he told me the trick. As it turns out, the amulet found in the game can be abused to avoid fights! If the wizard holds the amulet up to the light without reading it, enemies continue walking whatever direction they were (often THROUGH the wizard) and do not initiate combat. Hopefully the trick to dodging the level 1 goblin that I discovered was a fair trade of information. Either way, thank you Feasel! :)

My route changed drastically, and became a thousand times more dangerous. I was no longer able to justify spending a few seconds obtaining the slime potion to avoid being slimed in level 2, because I now skipped the troll bomb chest in level 3, which meant I needed that money for level 5's shrinking potion. This turned most of my nights into never getting past level 2, and as anyone that watched my stream during these nights would know, I was a teensy bit cranky.

With enough practice, I managed to get a run in that had one unnecessary death, final time of 11:46. I felt like I made enough mistakes, extra death included, that I kept going for a better run.

And thus, this run was born. Here's a rundown, level by level.

Level 1: I got the fighting pattern I was comfortable with (the more common one of the two), had decent fights, and successfully evaded the third goblin. It's possible that the goblin can suck at following you and let you get through the left door without having to touch the right door, but it's rare.

Level 2: Everything went... so perfectly. I drew the slime to the spot I wanted it to be at before leaving, which was a good start. After that, a miracle occurred: ALL THREE WISPS FOLLOWED ME THROUGH THE DOOR QUICKLY. Usually I wait for two of them and then use the scroll, but they all swarmed through the door to help me. They made quick work of the goblin I needed out of my way, as well as the other goblin in the room while I dealt with the king. The next part that worked out incredibly well was how I dealt with dropping the granite stone for the slime - not only did I survive, but I didn't waste any time dancing around. Finally, the second slime (which seems to be very random to me) let me pass. I don't see much room for improvement here.

Level 3: Easy level, the only inconsistent/scary/run ending part is the last room with the teleporter. I don't know if it's on a global timer or if it's pure luck. Everything went pretty nicely in this run, if anything I wouldn't have minded getting through the teleporter with two uses of the amulet instead of three. Solid level 3 for me.

Level 4: Mixed bag. I started off shaky by dancing a little bit around the man who gives the wizard the carpet. The first flying room went well. The second flying room, I had a little issue with the top-left wall. I attempted to align myself to fly straight through the middle, but after bumping into the wall, my straight shot through was clearly not going to work. I had to take the more rounded path, costing me around 3 seconds. The rest of the level went incredibly well, however. And yes, believe it or not, spamming the amulet in the last room is significantly faster than fighting the troll and then walking around the triangle three times.

Level 5: Just another solid playthrough for me. I took an intentional death to save a bunch of time (learned this from Tom's run). Not only did the death make me grow back to normal size, but since the potion I bought was also poison, I didn't have to worry about fixing that, either. The chest also has a worm detector, but it's completely unnecessary. It may be possible to save a VERY small portion of time by learning how to shoot the lizard-bird down on the switch instead of dropping the bait on the switch, but that seems much more like a TAS strategy than a human strategy. :)

Level 6: ALMOST perfect. I accidentally bumped into the wall on the barrel, slowing me down ever so slightly. Norlac thankfully cooperated (I've had a few runs end there, but mostly in my earlier stages of speedrunning).

Level 7: While waiting to use the fire scroll, I accidentally tried to use the amulet. I caught my mistake, and spammed the buttons to close the menu. Since my blink scroll was out of uses, this caused me to open up a message saying "this is all used up!" A little frustrating.

And with that, the Wizard was done with the dungeon. He might not have had a girlfriend with this ending, but I'm sure someone back in his home town rewarded him with a chikin sammich.

Special thanks:
Dryzalizer for suggesting playing the game in the first place.
Kronicsauce for support and digging around on the internet for information.
Mooffinman, my roommate at the time, for putting up with me constantly talking about a game that's older than we both are.
Tom Votava for initial speedrun tactics and the time saving death in level 5.
Feasel for teaching me the amulet trick (and telling me where that darned coffee pot was) - best of luck to you on your Zelda II speedruns.
Every single one of my viewers for putting up with levels 1 and 2 being repeated hundreds and hundreds of times.