Spawned from the characters in car safety commercials in the early nineties, Incredible Crash Dummies was developer Gray Matter's attempt to translate this unlikely subject matter into a gaming medium. Players take control of dummies Slick and Spin as they set off to rescue Dr. Zub from the clutches of the villainous Junkman. 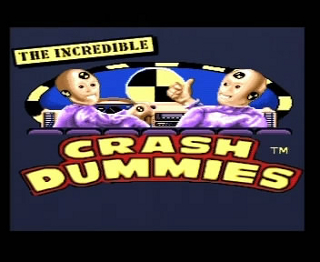 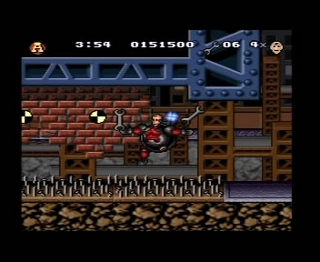 So this is my second speedrun submitted to SDA and I chose anouther game that I remember being able to beat In one sitting relativly easy when I was little.

Thanks to the good people who help run this place Mike, nate, Breakdown, dex, Flip, etc.

General things about the run:

Getting hit/jumping/sliding dosent effect your speed in anyway.

You move the same speed no matter how many limbs you have left.

Their are some sections in the game wich cause you to pause after you land a jump on them.

I try to get rid of any spare spanners before the end of a level becuase the score counts them down before the timer.

No problems. Moving on.

I slide under the first two cars so that my invulnerability lasts long enough on the second car for me not to lose anouther limb. I also need to make sure I have at least one leg at the end so I can get the boost without stoping to jump again.

The little shortcut at the start only saves about a second if that but its much easier to be consistant with it rather then the platforms above.

Jumping seems to do more damage the spanners.

Easily the low point of the run should of only hit 2 of the walls. My excuse is an awkward hit box and no easy way to replay and practise this area. The rest of the run went so well apart from this.

Not much to say, lots of floors that cause you to stop when you land on them. Try to jump up and down slopes as much as possible.

Made a mistake and got caught on the edge when trying to avoid the airbag after deflating.

Boss 2: went ok, could have been faster if he didnt jump as much.

Don't know if the hit box is any different then the car bit it feels harder. Only 1 mistake and it was a stupid one.:(

level went well, just needed to have at least one leg so I can reach the boost with out having to jump again.

didnt mean to hit the floor after the spring but its quicker then hitting the other spring or the airbag.

This can be the quickest or the slowest boss in the game depending on if it starts flying around. Luckely this is the fastest ive ever killed him.

one mistake couldnt avoid becuase of the way I was jumping earlier, didnt have time to land and jump again in time.

Taking the airbag and then the damage when it runs out at the start is so much faster then what you are supposed to do.

Thanks for watching and if you have any feedback questions feel free to message me on thevforum.