This version of Indiana Jones's third adventure was released in March 1991 by Taito software. Indiana is in a race against the Nazi Regime for the Holy Grail. Only this time, there are two Joneses along for the ride. 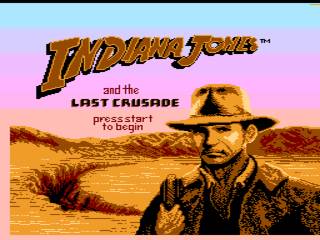 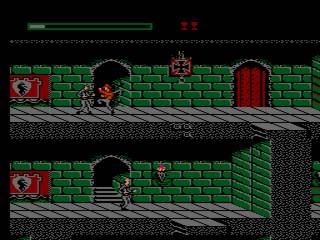 Here's a fun little game. Most movie-based titles aren't worth playing, but this one has enough variety to keep it interesting. It basically follows the main scenes from the movie: Getting the Cross of Coronado, rescuing Indy's father, the desert battle on the tank, and navigating the trap-ridded temple to find the Holy Grail.

The game also attempts to throw in the scene in Venice where Indy discovers the Grail's location, but instead of a location, he finds a picture of the Grail, which is supposed to help him "choose wisely" from a shelf of 18 possible cups during the final scene. I skipped this part, trusting to luck (and a little pattern recognition) to figure out the right Grail without the picture. Like with Gauntlet and the "vault" combination, this CAN be done without save states!