Released in December 1988, follow Indiana Jones on his second adventure in this game. He is stuck in the Temple of Doom and must save children, ride mine carts, and recover the three Shankara Stones in order to return peace to a small village in India. 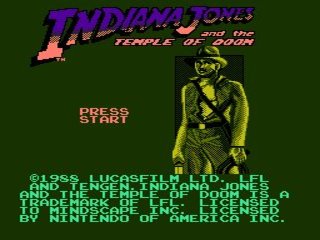 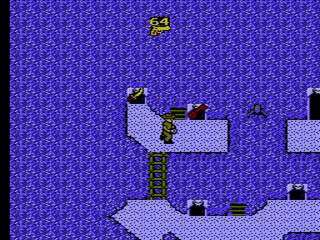 Once you figure out the structure of the game and get used to the controls Temple Of Doom is an enjoyable game to play. I might try a no-warps run at some point so that I can see a little bit more of it. But the route for the Any% run is pretty simple: Take the hidden warp from Wave 1 to Wave S2. Exit to Wave 7. Pick up the Skeleton Key; exit to Wave 8. Exit to Wave 9. Use the Skeleton Key to short-cut across half the lava pit and kill the skull-heads to get the rest of the way. Exit to Wave 10, look at the Map to see where the random exit is (you only see one small fragment of the exit vicinity, since we didn't collect any of the map pieces). Exit to Wave 11. Exit to Wave 12. Beat a bizarre thing that you could argue is a boss fight.

The Skeleton Key is the first really RNG-dependent thing in the run. I don't know the chances of it appearing in that spot, but I seem to get it less than 20 percent of the time. So there are a lot of resets here (fortunately only about 1 minute into the run).

In Wave 9 I need to get across the lava pit (only half of it, thanks to the Skeleton Key) by killing the skull-heads that randomly spawn there. Up to this point I've been grabbing subweapon ammo for pistols, knives, and bombs. More than half of this ammo will be spent fighting the skull-heads. All 3 subweapon types are needed depending on where the heads spawn. The faster you kill the heads, the faster new ones appear. The pattern in which they spawn is random, though there seems to be a limited number of possibilities. The most common outcome is that not enough heads will spawn for you to get across. This happens more than 50 percent of the time, so this is another huge reset point in the run. After you successfully reach the other side and collect the stones, there are 2 possible exit locations. There's no way to predict which one will be correct; you just have to guess. Unfortunately I did not guess the correct location, so I lost a little bit of time backtracking to the other location. The rest of the RNG in this run was good enough that this one loss was acceptable.

Wave 10 is a labyrinth of doors connecting 6 separate maps. There is a random exit hidden in one of 24 possible locations in this wave. The only way to find the exit is to look at the map fragments that you're supposed to have been collecting all along. Well we didn't collect any. So all it shows you is the one map fragment that contains the exit location. Based on that you're supposed to figure out which of the 6 parts of the level is being shown, and where in that level to search. The map is not very detailed, and it only shows landmarks within 1 screen of the exit. Fortunately the limited information is just enough to disambiguate the 24 exit possibilities. I made some notes to remind myself which fragment and icon placement corresponds to which path. It was a challenge packing all this information into a form where it can be read in a single glance during the screen transition between Wave 9 and 10. I came up with some good mnemonic devices and broke the paths into categories based on their initial actions to make it all easier to remember.

Of the 24 exit locations, 2 of them are essentially unreachable because you'd have to cross some lava pits, which you don't have enough subweapon ammo to do (and would take several minutes). Another of the exit locations doesn't exist -- due to a programming error the exit door simply isn't there. Of the 21 exit locations that are actually reachable, the time it takes to reach them varies between 5 seconds and 90 seconds. About half of the locations are just too far away to give a decent speedrun time. So this is another big reset point in the run. I was very fortunate to get one of the fastest exit locations in this particular run.

Waves 11 and 12 are pretty straight forward. I saved enough pistol ammo to get through, so I didn't need to gamble on finding one of the hidden ammo drops. The final boss stunned me for a bit, but I managed to beat him with a bomb (I think one shot with the pistol will work too). The second part (climbing the ladder) is kind of a joke. The only challenge is not losing time by getting hit with the arrows. I've had many attempts where the final boss was glitched out and did not behave correctly or at all. Sometimes the boss would not appear and you'd just continue to walk along the bridge for 30 seconds before being teleported to the ladder-climb. Other times the boss would spawn below the bridge where you can't reach him, or you might manage to kill him but then fall off into space and get stuck. I was fortunate nothing crazy happened this time, because it takes many many resets to get the luck needed to reach the final boss.

After beating the boss and climbing the ladder you rescue your wife(?) and kid(?). Instead of walking up to them what you can do is attack with your whip, which grabs your wife and pulls her to your side. This triggers the perplexing "YOU WIN BIG MAN" message on the ending screen. It also causes character control to end slightly sooner, since you don't need to walk all the way over to them (control ends the moment the whip makes contact).

This run would not have happened if I hadn't spent some time with TheMexicanRunner at AGDQ 2014. The deal was that he'd beat the Cybernoid record and I'd beat the Temple Of Doom record. He kept his end, and I kept mine. Thank you to everyone who supported me during attempts at this game, and to all those who enjoy the relaxing rhythms of "dink, dink, dink".