Intelligent Qube is a unique puzzle game released in Japan under the name Kurushi on January 31, 1997. Your character faces walls of cubes rolling towards an edge, and by destroying key cubes with ground-laid traps you prevent the stage from collapsing under you, much like an evolved version of Klax. Forbidden cubes destroy the stage if captured, bombs can catch a 3x3 grid and you can guard spots from being captured by bombs to spare the previously mentioned Forbidden cubes. A frantic game of quick decisions, it was a much greater financial success in Japan than in the US. 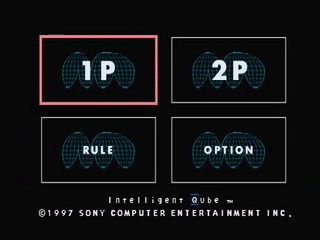 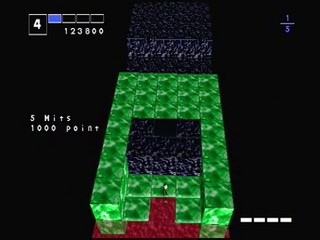 They say the cubes are intelligent. They say they feed on fear. I say it's time for a diet. Oh this is Intelligent Qube, but the tables have turned.

Three Weeks to complete one roll? Try 4 frames.
Son's 18th Birthday before the next roll? 6 frames
Impossible to miss a move? Err, let's not talk about that

This is Intelligent Qube, except now we play at 12x default speed. 5x Level 4 Speed. This is 19 minutes of square-holding acceleration. Are you ready?

If it isn't clear by now, this is the divisive PS1 puzzler Kurushi. Whether you think it's an overlooked classic or a plodding monotony, there's no arguing it's a simple game. You run around, you capture non-black cubes, you have rows added to the playfield, repeat. It features an art budget that all went on the music, quite a lot of black background and Shouty Bob, who says Perrrrfect a lot.

I'm feeling quite contrary today though, so after I've lined up my maids I'm going to argue that IQ is more than a simple puzzler. Despite the fact the mechanics are the same from start to finish; this is actually a deep and complex game to speedrun. Things that are rarely thought of in casual play like the size of the stage, the block scale and even where you're stood suddenly shoot to the forefront and your job is to juggle all these things while still dealing with the puzzles efficiently.

Below I've outlined all the mechanics, then how I'm using them on the various stages.

Bombs
-----
Capturing a green (Advantage) cube leaves a green marker behind. These can be activated at will to capture a 3x3 area of cubes. They persist between puzzles and waves unless a new wave extends beyond the marker.

The only way to cancel markers is by activating them.


Black Cubes
-----------
There's a reason these are called Forbidden Cubes. Capturing one immediately collapses the last row of the stage


Block Scale
-----------
These are the white bars in the bottom right hand corner. Each non-black cube that isn't captured will turn one of these red. If it overflows you lose a row of the stage. It's always one less than the width of the stage and is reset between waves or by capturing a black cube.

The cubes that roll off the end only add to the scale after they've fallen under the height of the stage, not when they go over the edge. You can see this best on the last puzzle of stage 2 where I capture cubes while actually squashed. This pauses the ones falling and gives me time to get back up before the row I'm squashed on crumbles.


'Blue Blocking'
---------------
Placing an inactive mark in a bomb's radius will prevent that square from being affected by the bomb. You do sacrifice one turn of single marking to do this, as you have to wait for whatever you protected to roll off before activating the mark and being able to place another.

Strangely this mechanic isn't mentioned in the in-game tutorials but is required for high level play.


Guide Marks
-----------
On the default game level, all marks placed on the playfield have handy arrows above the puzzle so you can keep track of them while the cubes obscure the marks on the ground. On levels above default, you don't so you have to remember where they are.

The exception to this is if you get squashed. The repeat of the puzzle will have the guide marks active for its duration.


RNG
---
In game code terms, which puzzle is coming next is not decided until the frame before its' cubes start moving. In real terms, the game seeds the standard PSX RNG with the number of frames rendered before a stage begins, determining the puzzle set at that point. This means it’s technically possible to reverse engineer the seed used by noting which puzzles have appeared, and projecting forward, which puzzles will come.

Each puzzle size has a pool of 200 hardcoded puzzles to choose from. Additionally, there's more RNG in the form of a 30% chance of flipping the chosen puzzle horizontally.


Getting 'Squashed'
------------------
As is used frequently in the run, getting squashed will repeat the puzzle once (except between waves). This is useful primarily because it takes the next puzzle out of the hands of the RNG. It's also pretty damaging if not done intentionally as it makes every cube that rolls off the end of the stage count towards the block scale, rather than just non-black ones.

There's a weird but immensely useful bug to do with the squashing. If you haven't touched a controller button or only pressed d-pad up while the puzzle has been 'alive', then instead of actually going through the squashed sequence your character will just be stood there unaffected by the cubes. You can see this in the first two waves of Stage 1. I get properly squashed by the first puzzle of the run, then am unaffected by the first puzzle of the second wave.

Oh, you're counted as squashed if you stand under a cube after the halfway point of a rotation.


Perfects
--------
Capturing all the non black cubes and not adding to the block scale adds an extra row to the playfield. Bonus points are also awarded based on whether you dipped under, equalled or went over the puzzle's TRN (Typical Rotation Number) in the top right of the screen.


Slack Space
-----------
Each stage begins with enough rows on the playfield that you can completely ignore one of the longer puzzles and still have some rows left over. These extra rows are then exchanged for the avoidance of perfects.

Stage 1
-------
The idea for the first stage is to bomb the crap out of anything that moves. An ideal beginning starts like this run, with a puzzle containing a green cube in both halves and capturing both before getting squashed to repeat it. Good RNG then gives you puzzles that fall under the same criteria so you can just continue getting squashed and bombing.

Getting Perfects, capturing black cubes and slack space really don't matter here since the stage is so short.

This stage took 65 seconds to complete, my best is 54.1 (https://www.youtube.com/watch?v=zMhSenYWD1w)


Stages 2-6
----------
The puzzles become larger but for these five stages the general play is the same. I aim to leave one or two cubes per puzzle to roll off the end and then capture a black one on the last puzzle to lose a row. It doesn't always follow that pattern, but those things always happen.

I always ignore the first puzzle of the third wave since I have the rows to spare. Losing the extra rows is beneficial as it means future cubes have less distance to roll to fall off. Also, it's far faster to ignore a puzzle than tackle it.

As long as you make it to the last wave, you can't die even if you ignore all of the puzzles on it. The aim of the last wave for each stage including 7+ is to:
Ignore the first puzzle
Get squashed but make some dent in the repeat so it doesn't cost as many rows
Do the last puzzle semi-competently. The idea being to dovetail the end of the stage collapsing to the finishing of the last puzzle so you can immediately skip to the next stage. This gets progressively harder to achieve as the wider stages take longer to collapse.


Stage 7
-------
Pray. Stage 7 is home to the least slack space, the hardest / longest puzzle, the hardest puzzle group, and the game's black sense of humour. Due to the size of the puzzles it's entirely possible for the game to start you off on a wave with a puzzle which is impossible to solve in the space you have behind you, even if you have collected a few extra rows.

Even with that, my two best runs so far have had me been unintentionally squashed by the first puzzle I encountered here. The damage isn't irreparable, but requires a few perfects to redress the balance, which is what I do in the run.

Even if I'm well ahead on rows by intentionally getting perfects, I'm still wary of ignoring the third wave like the earlier stages. In exchange for not intentionally squashing then, you can let more cubes per puzzle slide off into the abyss so that's generally what I do instead.


Stage 8
-------
This starts with the deadly puzzles from 7, but since there's only 2 per wave and comparatively oodles of space their sting is neutered.
The play style from 7 continues, except more extreme. With 16 rows of slack space over 6 puzzles, that more than 2 whole rows of cubes per puzzle you can ignore and since the black cubes don't count, it's actually more like 3. Hence why I pretty much only take out one side of the puzzles.


Final
-----
In the file that holds all the game puzzles, there are 70 bytes reserved for each with 1 byte equalling 1 cube. In the released game the puzzles only go up to 7x9, so it's my thoughts that at some point the Final puzzles extended to 7x10. As it is, there are more 7x9 puzzles thrown at you than any other - 6 on Stage 8 and 4 here.

The extreme cube leaving can go up another notch here. With it taking 7 cubes over the edge to lose a row, with 14 rows to spare that's 98 of the 189 puzzle cubes you can leave (7x9x3). However, since on average 23% of the 7x9 puzzle cubes are black ones, that's 98 of 145 eligible cubes. Except that you can fill up the block scale with no penalty and so lose 6 more cubes per puzzle without another row disintegrating. This take the total of cubes you can leave on average up to 116 of the 145 or 80%.


==============
Summary
==============
For its simple presentation and never changing mechanics, IQ is quite a deep puzzle game when speedrun, having more to do with managing the various resources you have at your disposal with the puzzle solving being rather secondary.

And that's about it. I made a simple site after dumping the puzzles that has the entire puzzles pool, sample solutions for most and some stats, because I like useless stats - http://iq.airesoft.co.uk

Shoutouts to Syonyx/BoyOfDestiny for his FAQ with sample puzzle solutions. I didn't take any solutions from it (for the run, I did put them on my site with the respective puzzle) but he deserves some props for the sheer dedication and effort put into it.

Shoutouts also to the World Snooker Championships which must be my Intelligent Qube spinach. It took three months to get my first completely accelerated run done, then I didn't play it for four months, then after a week of no joy I listened to the Snooker one day and finish it three times in two hours. The next day I did the same and that session produced this run.

Oh and tech wise I played this on a PS2 with FDS enabled.