Released in 1988, Jackal is a free roaming top down shooter from Konami. In it you assume the role of a group of army guys armed only with a jeep that can apparently hold upwards of 20 people as well as infinite supplies of various types of ammunition. With this super jeep (or jeeps if you have someone to play co-op with) you are tasked to go deep behind enemy lines to rescue POWs and defeat hordes of enemy soldiers and vehicles on your way to taking down the enemy's headquarters. Truly a battle that will make your blood boil. 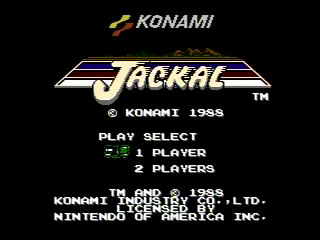 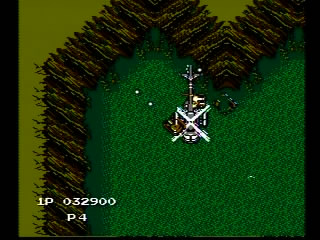 Note: No upgrades is the equivalent of low% in Jackal.

I spent about 11 hours recording before I got this run, which I got while streaming live. Thanks to everyone who watched my streams; the live interaction makes speedrunning more fun.

Here are some differences between the low-percent run and the any-percent run.

In the low-percent run, I don't get any weapon upgrades, which means I keep the grenades the whole time and don't have to rescue any prisoners of war. For an any-percent run, I get fully upgraded to the four-way rockets in stage one by rescuing three prisoners of war. Being fully upgraded causes the final tank of the stage-one boss fight to appear about four seconds earlier.

When the Jeep is fully upgraded, the game throws more enemies at the player. More enemies can cause more lag. The four-way rockets can also cause lag because their explosion is bigger than the explosions of the lesser weapons.

Since I plan to use death abuse against the fourth boss (paratrooper-dropping chopper), I purposely die at the same time that I kill the third boss (battleship). When I die, I lose all of my weapon upgrades. This way, I can have just the grenades through level four, which makes fewer enemies appear than if I were fully upgraded. This probably doesn't save any time but just makes going through level four a bit easier. I use death abuse against the fourth boss and then rescue a prisoner of war near the end of stage five to get back the rockets. Killing the fourth boss in one cycle without dying is doable, but I was never able to do it consistently, and it is a bit slower than the death-abuse method.

Near the end of stage six, I missed destroying the helicopter, so I had to waste a couple of seconds waiting for it to pass. My fight against the tank boss went really well. I didn't die and missed only one rocket and was pretty much all up in his grill.

This is the fourteenth run I've had accepted by SDA. After practicing Jackal for about a week, I spent about four and a half hours recording attempts over the course of a few days. I got a few runs between 0:8:48 and 0:9:01 before I got this run.

In certain spots, the game lags because of numerous on-screen enemies. I tried to eliminate lag by quickly destroying enemies in these spots.

Stage One
I run over my first infantryman about 19 seconds into the run. The boss fight went well. After I kill the third tank, I go to the top of the screen because that is usually where the last tank appears.

Stage Three
At about 26 seconds into this stage, I usually destroy the small battleship to reduce lag, but I missed; I ended up throwing a grenade straight ahead instead of diagonally right. The boss fight went just how I wanted it to.

Stage Four
The paratrooper-dropping chopper is one of my favorite NES bosses, so I give it a quick death.

Stage Five
MASTER-88 had an accidental death in this stage, so I gain a few seconds on his run by not dying here.

Stage Six
I missed with two grenades during the tank-boss battle. The tank boss killed me once with its flame. This death probably didn't waste hardly any time because I used the temporary respawn-invincibility to blast the tank with the machine gun without worrying about dodging. If I hadn't destroyed the tank boss when I did, I think that bullet would have killed me.