Jade Empire is an action / RPG / adventure hybrid, released by Bioware and Microsoft in April 2005. Drawing its inspiration from ancient Chinese martial arts it offers the player a blend of NPC interaction, combat and exploration. It also features its very own language, and naturally the whole gameplay experience comes garnished with a liberal sprinkling of Chi. 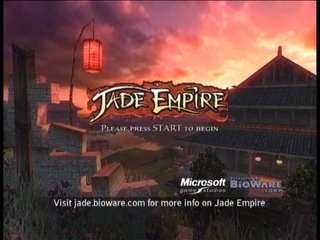 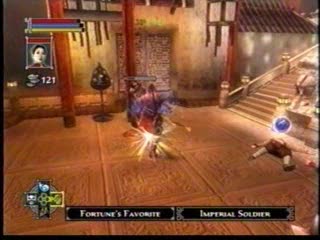 Category note: Characters do not count as separate categories because initial stats and skills can be changed before the game starts.

Big thank you to Garrote, whose run preceded mine, Nate, Radix, Mike, Enhasa, hell, even Grenola, the whole team...

I approached this run with the "completely eschewing leveling" strategy. Well, I don't completely eschew leveling, but I go segments at a time without leveling up my fighting styles at all. I do level up my body, mind and spirit, however, because that doubles as an instant Focus Shrine + Spirit Font.

Yes, using autosaves at the end of segments does not incur the 1/2 second penalty, but I manually save my game anyway. This is because the game does not keep count of more than 5 autosaves at any given time. A segment may take up more than 5 autosaves, so if I were to attempt the segment again, that save point would have been deleted. Forever. And besides, what is 5.5 seconds worth in the end, anyway?

My primary follower is Sky in support mode. I use Sagacious Zu up until Segment 6, and Dawn Star helps out intermittently. Ice Shard + Legendary Strike harmonic combos take care of my chi, and Storm Dragon + Legendary Strike combos help out with focus.

In all instances of dialogue, START doubles as the A button. So basically 99% of this run is actually just mashing START and A alternately =D

You can pin down enemies by constantly switching between two or three styles.

This run used to be 9 segments, then 11, now 12. Obviously, more is better =D Just kidding. I've thought about a single-segment run of this game, but that won't happen till much later.

If my concept of how this game is timed is at all accurate, then this run is 2:36:46. Hope you enjoy this run! Yay.