Released in November 1987, Jaws faithfully recaptures the experience of the film by putting you in the shoes of a generic diver trying to kill Jaws. In this game you mostly run around wondering what to do, while being assaulted by jellyfish, stingrays, and sharks every two seconds. Once you understand the core gameplay, Jaws will keep you coming back with its intriguing shell economy and photorealistic shark hunting. 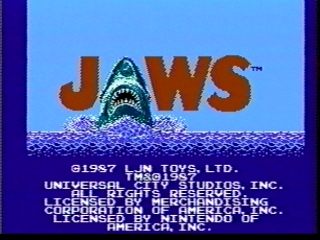 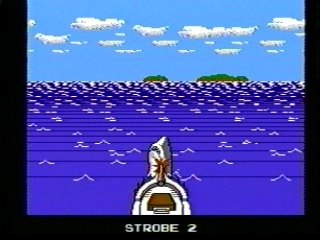 Jaws is not a highly sought-after title, but it's been the competition of Rudy Ferretti that made me push this game so far. Trying to beat his times made me go back to the drawing boards, armed with a now-obsolete TAS (tool-assisted speedrun made on an emulator) and a mood for experimentation.

At first, I was quick to disregard most aspects of the TAS as being infeasable on a console, but then I decided to try and figure out just how those aspects were done. The TAS did these things that I didn't have in my previous Jaws running method:

The first one was pretty easy to figure out: any time you reach 30,000 points, the minisub will appear on 1 of 4 spots on the map. I had never noticed it before, because a perfect Bonus Scene is necessary to meet the points quota, and that was not a part of my previous method.

The second one was more tricky. In the TAS, the boat made some jerky motions on the way to the East port, and managed to skip the third underwater encounter that I was always running into. I tested a few things and figured out that it has to do with timing. I learned that if I wait a few seconds before moving my ship, the encounter appears closer to me. If I wait more seconds, it will happen as soon as I move the ship. Just a little longer, and the encounter doesn't happen. But if I wait too long, it still happens, just further down the way than it would have originally.

The first and second encounters plus the bonus scene are needed to meet the 30,000 point quota in order to get the minisub. So the only encounter I could try to avoid is the 3rd encounter. All I had to do is stop one space short of it, wait a little while, then continue on. Three problems:

Two of those are based on guesses and one is random luck. The odds of all 3 of them going right are outrageous, but I never liked odds all that much, so I kept trying.

With a game whose total length of a successful run is under 5 minutes, it's possible to make a few hundred attempts in one sitting. I've probably made over 1,000 recorded attempts since my last Jaws run was published on SDA in May 2006. Only three times was I able to avoid the 3rd encounter, but two of those times had other mistakes that kept me from getting a time worth the trouble of missing the encounter in the first place.

About my general encounter technique:
If I hit a stingray or jellyfish and he drops an item, a replacement enemy won't spawn until I collect that item. So it's a good idea to swim towards the enemy while shooting so you can collect the item as fast as possible. Of course, they don't all drop items, so for the ones who don't drop items, it's better to shoot them as fast as possible. I don't know which enemies drop items, so I have to guess whether or not to kill them quickly or while swimming towards them.

About my Jaws encounter technique:
Hammering Jaws with bombs from the minisub won't kill him any faster because not every hit registers. There's a space of time between hits that will register damage to Jaws' power and my technique is to toss bombs as close to that space of time as I can manage.

So here's a list of things that need to go right for an ideal Jaws run:

The term "statistically improbable" was coined for this game. True story. I don't think I'll ever beat this time, but I won't say it's "impossible" to do so. You just need lots of practice, lots of time, lots of luck, and lots of patience.