The second installment of the Jazz Jackrabbit series was released in July 1998. Devan Shell is back again and has another ingenious plot to eradicate the bunnies from this world: Travel back in time and change evolution's path. In order to complete his time machine, Devan stole a diamond from Jazz's beloved Eva. It's your job to get the diamond back and save the bunnies once again. While the gameplay basically remains the same, JJ2 features much updated graphics and a new playable character, Jazz's little brother Spaz. 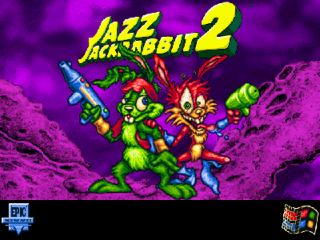 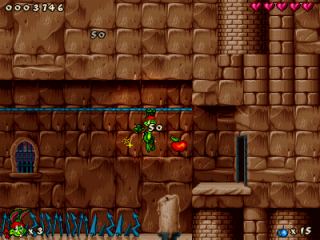 I thought this game would not be very popular when I first suggested it on SDA. However, it turns out I was pretty mistaken; a number of people had heard of the game, so I stuck with my original plan of doing a speedrun. I actually have done two speedruns of this game, one for Jazz and one for Spaz, but for the purpose of these comments I will discuss only the Jazz run.

I did this run first - Jazz is not as fun to use, so I thought I would get him out of the way early.

Before I start, I'd like to thank Robyrt for giving me some general advice. I'd also like to thank Radix, not only for being willing to host this, but also for indirectly pointing out I was using too high a resolution, making things harder to distinguish.

In any run, Jazz is going to be the slower character. He lacks a double jump for taking shortcuts and he lacks the side kick to use against bosses. He instead has a helicopter ears move to slow down falls and a super jump that must be done from a crouch.

Some notes:
-In most levels, your character starts on a platform during the loading screen. As soon as the graphics have loaded, the game removes that platform. If you hold the jump button during the loading screen, you can actually jump from this platform. I use this only in places where I stand to gain time for sure. And this glitch does not work in levels 7, 9, 11, 15, 17, 21, or 23, where you 'teleport in' to the level.
-In level 12, using the aforementioned trick has the unintended side effect of draining all the water from the level. While this removes the ever-annoying 'swimming' element, the level is actually harder to complete unless you know all your moves well. I am pretty sure this is faster, however.
-During periods of invincibility - after taking a hit, while using a shield, or grabbing a carrot - you can pass right through, and even stand within, enemies. I use this quite a bit, especially for early boss fights so I can get the Toaster to hit immediately.
-Early on in the game, I rely on my thumb to shoot very fast. Once I have enough Fastfire powerups, though, I let the game take care of my fast shooting, except for weapons that don't use Fastfires (such as the Missile Launcher). My shooting looks less sporadic mainly because of this fact.
-I take the time to destroy the chain on the level 18 boss because it kept killing me before. Only after the run did I discover that using the Toaster for this job was easier and quicker.
-I wind up collecting each weapon at least once in this run, although I don't use all of the ammo I pick up. However, I do not go out of my way to get ammo unless I intend to use it - it's just faster to pick it up inadvertently than deliberately avoid it.
-There are at least two points where I accidentally run out of ammo for the weapon I wanted to use. Yes, I did panic when this happened, but I found ways around the problems.
-This run has no deaths whatsoever. However, I become very, very cautious when I have one hit point left as a result.
-I end the recording at the high score screen because the fire alarm in the building went off during the last level. I had to rush out right after finishing the Devan Shell fight and there would have been an extra five minutes of waiting for me to input my high score if I had included it. I wound up taping over most of that five minutes.

Most levels went great, the RNG on the first boss (The Queen) was one of the best I've ever had and I got the skip on Medievel Kineval first try. I prefer getting the first sugarrush a little bit later but it was OK. The second one was horrible but the last one was great. Overall it was a good run with quite few mistakes.