Released in September 2003, Jedi Academy follows Jaden, a young Padawan on his way to becoming a real Jedi. New Force Powers and an improved battle system allow for epic lightsaber duals in the final part of the Jedi Knight trilogy. 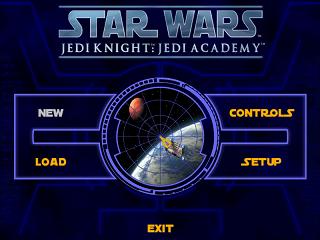 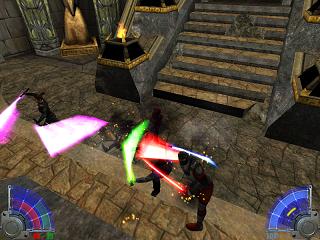 Character design as well as lightsaber color and hilt have no effect on the game at all, so I just picked what I liked best. The game contains of some missions you have to do and 3 sets of 5 missions to choose from. You have to do 4 in each set, so I obviously skip the one that takes longest. Before each of those 12 missions I chose you can improve one of the light or dark side force powers. Core force powers are increased by one after segment 8 and segment 15, or rather before set 2 and set 3. As you will notice, the better those core powers get the easier it is to take a shortcut.

Segment 11, 13, 14, 15 and 21 have been improved after I had finished the game. They stay entirely compatible to the rest of the run, so the only difference that could be noticed is that the time on the saves is off by a bit, but that's not important at all. Something else you will notice is that I used a whole lot less saves than I did in Jedi Outcast. I only save before the bosses. Anyway, now for some comments on some levels:

yavin2: There's that long waiting times at the beginning, so I jump around on Rosh's and Kyle's heads. Well, I usually bounce back and forth between some, but I messed that up in the run where the important things went fast. I also messed up after the training remotes. You can jump on top of the wall from there, but I feel down >_< Well, it was just for fun anyway.

hoth2: I have no idea why there is no hoth1. Anyway, you're not supposed to take the Taun-Taun over that stone barrier, but hey, it's easy if you just boost over a stone. However, it seems to disapp ear halfway through the cave. The second Taun-Taun is in an awkward position as well. I wonder how it got up there, it usually is in front of the cave. The other Taun-Taun in that area was missing in action as well.

t2_trip: There's an ultra high quality version for this because the area moves by so fast and it looks bad even in the HQ video. Even the UHQ version has some artefacts left, but that's because of the grey foggy background.

t2_rancor: The Rancor seems to react on sound and vision. However, as opposed to jaden, the prisoners don't seem to make any noises when running away. So unless they run into its line of sight, they can get past the rancor easily. I freeze it facing the wall with Mind Trick and so the second and third set of prisoners can run by to safety. I take another way up in the enc so I don't accidently block the way of the prisoners, slowing them down.

taspir1: The flying Stormtroopers are the only enemies you can stand on. Theoreticly, that is. Thy usually move away instantly when you're on top of them or even just close. As awesome as this shortcut might be, it isn't easy to do.

taspir2: I choose the light side for two reasons. 1) It's faster to just take down the lightsaber instead of slicing Rosh into pieces.

kor1: 2) Although you have the same amount of enemies in this level, on the light side, you only have to fear the Sith. You also seem to get pushed around less on the light side because Jedi and Sith are busy with each other and don't really mind you.

So here are come the times: