Released in November 2000 for the Dreamcast, Jet Grind Radio was a critically acclaimed skating and spraypainting game that pioneered the use of cel-shading. Beat is the leader of a new Tokyo-to gang called the GG's. As the story unfolds, the GG's must recruit new members, defeat rival gangs, and eventually stop a sinister plot involving corrupt police, a business tycoon, and a demonic record. All using the versatile power of graffiti, of course. 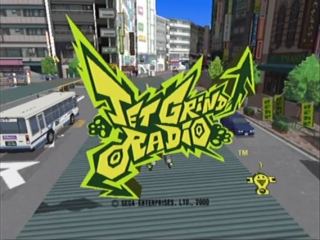 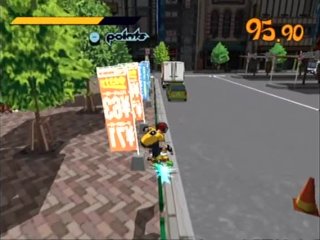 JSR is my second speedrun, my first was the ps2 Shinobi. I decided to play as Tab because he has easy tags and holds 30 cans. I skip all the optional character challenges because the only character I would opt for over Tab is the Noise Tank (who holds 50 cans) and I don't think you can even get him on your first play through.

There are 3 classes of mistakes in JSR speedruns:

You begin the game as Beat and first you must complete 6 tutorial trials. These are mostly basic exercises and there's not much to say about them except that in Tab's second challenge, what happens is that I trip over a curb and land behind a sign. It just looks like I disappear for a moment.

So now Gum and Tab are selectable. We're only going to see Tab for a while but the others will pop up again later on. I made these custom tags just for this speedrun. The reason the medium tag says "EBU" is that Megatherium and space demon ebu are the same person. The small and large tags are self-explanatory.

Many people that didn't like or couldn't get into JSR complained about the awkward control of the character. I wanted to speedrun this game to demostrate the kind of flows you can get into when you're good at the game.