Published by Shin'en in 2010, Jett Rocket is a Wii Ware title that really pushes what is possible with the limited file sizes of the platform. You gain control of the titular character after his ship was attacked while exploring the planet Yoroppa. Jett must collect several solar cells scattered across the planet to repair his ship and foil the destructive efforts of the sinister Power Plant Posse. 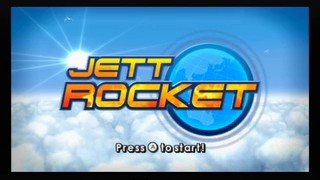 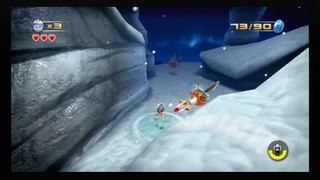 Welcome to this run of Jett Rocket.
I got this game from WiiWare and found that it was a great game and that it could be interesting to see a speedrun.
Sadly, SDA had no speedrun of this excellent game, so hopefully this will be the first one.

There was not a lot of community involved in the making of this speedrun so all routes, shortcuts and glitches are found by me.

The interesting thing about a run in this game is the fact that you have to pick up 550 solar cells in the
first two worlds to unlock the third. This means you have to do a lot of route planning. I think I've found
a good route.

There were also some downsides to running this specific game. Random enemy movement meant that sometimes when
you kill an enemy on a platform, its solar cell will fall to a floor below. This is hard to do a lot about.
Also, the camera angle really started bugging me because the camera can get locked while running.
Another thing is the fact that the 'roll' action is mapped to shaking the wiimote. This makes it harder
to be really precise.

If you think I have a tendency to be a little slow in the menus you are right. Since they are wiimote controlled and I cannot
really see where I'm pointing until it starts, it makes it slightly hard. I tried doing it fastet but ended up selecting the
wrong level at one point in an otherwise quite flawless run. Overall, a couple of seconds could be saved by faster menu action.

Here are the level comments:

Tutorial:
Goes okay. On the automatic walkway I roll slightly to the right which costs a little time.

Level 1-1:
A level where it took quite some time to find a good route since the solar cells are pretty much scattered across the level.
Everyhing wen't pretty much as planned (apart from slightly bad enemy placement with the second pair of enemies).

Level 1-2:
The water level. This level looks pretty straight forward, but there is a really annoying thing with the turbos.
If you just touch the side of them (instead of going straight into them) you get a bigger boost.
This is really needed at one place to get all solar cells.
Most things go as they should.
I miss the last turbo (because I try to just touch it) which means that the end timer is 23 instead of 24 (smaller is better).

Level 1-3:
This level is pretty straight forward. I chose to skip 3 solar cells on top of a pillar since it would
cost too much extra time to get them. When first approaching the moving platform it may look like my timing
is bad and I just miss it.
This is really not the case because the platform will only start moving once you are close enough.
This means that you cannot reach it the first time. The robot fight goes pretty well
(no solar cells went flying to strange places). Not really much else to comment on in this level.

Level 1-4:
A pretty annoying level to speed run because it can be completed somewhat fast but if you want a decent
amount of solar cells it takes some time. The solar cell from the first enemy falls into the water but it
is not a big deal. I have to go to the hang glider to take the solar cells that are there.
I take the longest run with the bomb and make it, saving me time opening new bomb launchers.
I found a pretty cool bug with the boss. If you hit it with the first bomb just as it is throwing a new
one (takes very accurate timing), the new bomb will still appear meaning you can give it 2 hits and only
have to take one valley of missiles (saving quite some time).

Level 2-1:
A pretty nice level. Sadly I have to go out of my way in the beginning to get the secret solar cells but they are really needed.
The rest of the level is pretty spot on. I use a shortcut behind the cliffs to get the 4 solar cells hiding here.
The 'hover board' part could be somewhat tighter when I use it to pick up solar cells.
I slow down before each jump to make sure I get every single solar cell here (again - they are really needed).
After the board part I stand on the railing which allows me to fly to the cliff on the other side.
This is really nice (yes - for the solar cells, but also because it leaves me where I want to be).
The last enemy is kind of badly places but I manage to get his solar cell.

Level 2-2 is skipped because it is the longest skipable level. The fact that so many solar cells were collected in the
other levels allows me to skip this.

Level 2-3: I don't really have a lot to comment on in this level. It takes some time because I need so many solar cells (because level 2-2 was skipped).
The level goes quite well. Enemies leave their solar cells in the platform (thx). Enemy hunt in the end also goes well.
In the end of this level is the first bigger mistake in the run. I am jetting up to get the last 3 cells.
For some reason, my game thinks I shake the wiimote and make me ground pound. This means that I need a little more jet to go again.
It costs 5-10 seconds :/

Level 2-4:
My least favorite level. It is long and big and the submarine part really sucks since you are dependent on it being in the right position.
I am a bit sloppy on the automatic walkways and a little time could be saved by tighter play here.
The bombing part of the goes pretty well. I found a glitch which allows you to move in the cutscenes if you are close enough to the domes when
throwing the bomb. This is especially helpful for the second dome where I manage to get quite far ahead in the level.
It turns out in the submarine part that I get 1 more solar cell more than usual (meaning I end at 551 - so I could have skipped 1 solar cell
in one level. which could have saved a little time).
The next icy and bombing part goes well too. Again, it use the cutscene glitch when throwing the bomb at the dome.
The maze could be a little tighter. There are two places where I sort of take the wrong way. This costs less than 1,5 seconds though so it is
not that bad.
With the next bomb dome is the second (and last) bigger mistake in the run. I nearly have the bomb in the dome but my wiimote feels
like it is begin shaken too much and "drops the bomb" on that one. This costs about 5 seconds. I use the cut scene glitch again and get hit by an enemy that is too far away to be visible.
It doesn't cost a lot of time and I get him after resuming control.
The boss fight goes okay. It could be a little faster since he is not that keen on attacking me.

World 3 unlocked. In this part it doesn't matter how many solar cells you collect so I just try to reach the goal as fast as possible.

Level 3-1:
This one goes well. I use a shortcut where I jet to a big spinning wheel instead of where you are supposed to go (skipping a part of the level).
The rest is quite straight forward. Quite a short level (especially when not collecting solar cells).

Level 3-2:
This can be a really annoying level. There are some platforms here, which do not always have the same timing.
The first part goes well. I take the teleport below to skip some platforms.
The next platform part also goes well. This can require a lot of jet if the platforms have bad timing between them.
Luckily they line up pretty well this time.
From here it is straight to the goes. Not a lot of fuss, good level.

Level 3-3:
I really hate the moving platform (so slow) so I use it as little as possible.
I found that you can use target attack to cross a large gap allowing you to complete the maze easily.
The rest of the level is pretty short and straight forward. I sort of mess up on the jett charger costing some time
(when I press A the game made me jett instead of jump because I was slightly in the air from spinning. Quite annoying).
Boss fight goes fine too. I actually get hit (I've never been hit by the light ball attack before), but it costs no time because I land in the right place.

Final Boss:
This fight went just after the plan. All three hits are in pretty quickly. Thus winning the game.

This was not a perfect run but concidering the controls and camera angles I think it was quite good for a single segment run of this game.
It took many long nights of planning and practice.
I hope you liked it.