Released for the Super Nintendo in 1993 by Electro Brain, Jim Power: Lost Dimension in 3-D made use of state of the art 3-D technology (i.e. carboard glasses packed in the box). Immersed in these stunning effects you take control of Jim Power as he attempts to stop the vicious alien Vaprak from conquering the last planet in his path to the dimensional vortex. What happens when he gets there? You don't want to know. 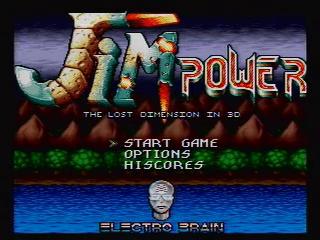 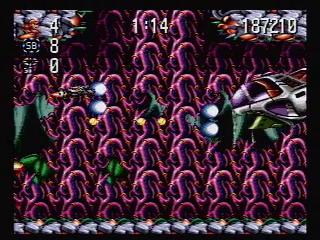 With apologies to Emptyeye, this game, not Astyanax, is the definition of style over substance. It drew a decent amount of attention back in the day thanks it its unique (for the time) gimmick - packaging the game with 3-D glasses and pairing those with parallax scrolling backgrounds to create a "3-D effect" that really just amounts to motion sickness. Trust me, you'll understand what I mean when you start watching this. This game destroyed me as a kid, and between that and the bounty for a run of it (originally from Red_Kryal, later PJ) I decided to take it on.

This was originally an Amiga game, and this is perhaps most strongly reflected in the Chris Hulsbeck soundtrack. Luckily this made the transition to the SNES well, and I'd say this has some of the best music of any SNES game. Unfortunately, that's about the only redeeming quality here. You die in 1 hit from everything, there are all sorts of unnecessary death traps in random places (standard Amiga design, I hear), and your mobility is severely limited. The SNES version also added two overhead-view Mode 7 levels, and the second one in particular has some of the worst controls I've experienced in any game.

What's especially funny is that for much of this speedrun, the music is drowned out by a horrible buzzsaw noise. This is because I have to charge up my bomb in order to quickly destroy powerup pods. Charging bombs doesn't actually make them stronger, but the flame around your body does lots of damage quickly. Because of this, I combine it with death abuse on some bosses.

In general, running this game largely comes down to managing your lives and bombs. Bombs are important for bosses and a few other areas, and you can save a lot of time by dying and using your invincibility to run through enemies and obstacles. As mentioned above, death abuse also comes in handy on bosses.

Stage 2 has the most interesting tactics for a speedrun. It's faster to walk diagonally, you can avoid every enemy with proper movement, and you can skip one long section by picking up extra keys beforehand. Stage 5 is just a nightmare to control, as mentioned earlier - it's probably improvable by a lot but it's nowhere near as easy as it may look.

This run was one of the most annoying for me for reasons outside the game itself. My capture card doesn't seem to like the backgrounds and would sometimes insert a bunch of frames, though I suspect it may be different now since I've switched codecs. Additionally, none of my SNES controllers have a perfectly reliable R button so I would sometimes release a bomb without meaning to. This happened to me once in this run and also got me killed in the process - check the stage 4 miniboss!

Because of these issues, this run may be the weakest I've submitted to SDA. I was actually well ahead of my previous best time going into the last level but didn't do so well there. Overall I'd say there's at least 20-30 seconds of improvement here, but I just got fed up with the capture card and controller issues. If anyone wants to take this on, be my guest!

Thanks to SDA and SRL, Heidman for suggesting diagonal walking in stage 2, and Chris Hulsbeck for making this a bit more tolerable (since I couldn't stream attempts). If you're interested in more speedruns of obscure and classic retro games, follow my stream at http://www.twitch.tv/srkfunkdoc !