Joe & Mac is an arcade platforming game released in 1991. It stars the green-haired Joe and the blue-haired Mac, cavemen who battle through numerous prehistoric levels, using weapons such as bones, boomerangs, fire, and even stone wheels. The objective of the game is simply rescuing a group of girls who were kidnapped by a rival gang of cavemen. The SNES port features an overworld map which lets players choose levels, which are longer than the arcade version, plus some bonus stages (either in the levels or out in the world map). Some of the weapons are missing and can no longer be charged up. The most unique item in this game over the other Joe & Mac games is the addition of keys. Also, the final boss is different and there is only one ending. 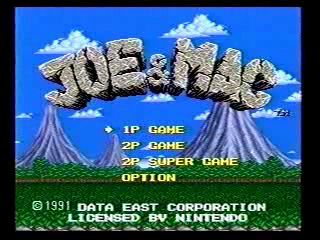 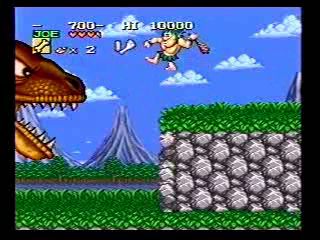 This is definitely a game people should pick up on the Wii Virtual Console. It may not be the longest platformer in the world, but difficulty does play a little role in that. The reason this run is done on easy is because bosses have less health (much less in some cases), so there's really no reason to do the other difficulties, other than I guess to challenge yourself. There are 4 different throwing weapons in this game (you can use your club, but there's no point, as you need to be right next to the enemy to even hit it...), which include bones, boomerangs, fire (I guess it's a club on fire?), and stone wheels (didn't see that coming, did you, hahaha). The strongest of the 4 is actually the fire but, you can only throw one of them at a time. The wheel is the second strongest, but the most useful in the run because there are two of them, so missing an enemy with one isn't horrible (if you miss with both, the rolling time takes longer than missing with one fire, so that's something to avoid as much as possible).

To switch items, you hit Select. Funny thing, I didn't even know you could change your weapons until about a month ago or so (that's what I get for losing my instruction booklet, I guess). Running is very interesting in this game. To run to the right, you hold down the right trigger button. To run left, you hold the left trigger. In most cases, you want to only hold the right, but you can hold both of them at the same time, so you can run back and forth quickly (helpful against some bosses). Rolling is achieved by quickly tapping the left or right direction buttons twice, and then holding to keep rolling for a distance. It's probably about as fast as running, but not as effective, as you have to stop rolling after awhile, and then start again. You can run into, and hurt enemies by rolling into them, but there aren't very many instances in my run where it would have been helpful, at least to help in the long run.

Very good run overall, and I'm very glad I achieved my time of sub-24 minute. As random as this game is, getting the time I did is incredible. Overall time lost I seriously doubt is over 26 seconds, but a perfect time would come very close to getting under 23 minutes.