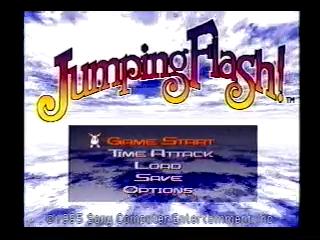 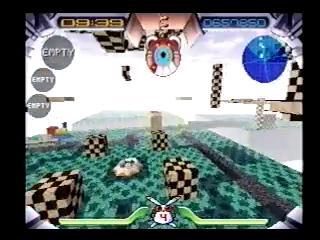 This is the second run I am submitting to SDA but is the first game I ever truly speedran. Most of these strategies I discovered doing IL's after beating mean bean single credit on Hardest. Some modifications to get weapons for the boss fights are done, and with a little practice in time attack mode weapons that were once used were removed for faster methods. The run cannot begin without a cheesy announcer yelling Jumping Flash!

CyberbotX for running this at the marathon, which in turn inspired me to do this run... hope I was helpful :) Venick for being a perfectionist that caused me to reset when I normally wouldn't Axon for beign a great friend Surreal for running lots of great games that gave me something to watch while I practiced on emu Sony for putting the best 3d platformer of all time on PSN so I can run it (and its sequel) Wodanaz for the great Wsplit Nate for Anri-chan SDA for hosting the run I guess any other individuals I forgot to thank individually, but not individually forgotten <3

1-1 (20s) This level starts with a hard jump to pillar into triple jump to the first jumppod (hence forth known as carrots, they looked like them so I call them as such.) Trick to this jump is to start turning before you start moving towards the pillar or one of two things happen, A) You will not land on the pillar (forward early) or B) You will be in a bad angle to aim for the second carrot(forward late.) And optimized grab will be turning right to nabbing the carrot before heading to the middle of the level. Grab carrots 2 and 3, jump block (timed motion) land and grab last to end. Easy level

1-3 (19s) Jump, shoot bomb, triple jump, and triple jump on dragon using rockets when available. No real reason to use the bomb since hes almost dead so it would be wasted.

2-1 (52s) Only issue with navigation is bad fall into the pyramid. Grab roman candle (laser) for 2nd boss

2-2 (49s) Start with a strafe to the right to make a smooth corner into first carrot room (out-in-outish) I fall down the hole this way so that I can turn while in the hole and start moving forward as soon as possible at the bottom. I double jump over these conveyour belts so that I can strafe over them, although single jumping is faster getting an accurate angle for the next turn can be achieved earlier than single jumps so I make use of this. I have issues grabbing 2nd carrot but the level is mostly clean.

2-3 (23s) Only issue with this fight was I didn't get the boss back out from the wall so my last jump took time to land, cost about 2s

3-1 (55s) Skip Twisters since I don't use them, grab rockets on way to exit. Fly by on second carrot is achieved from the book, but its a timing with how fast I get there. Sometimes the second carrot isn't low enough to complete a flyby whether it be going too fast or too slow.

3-2 (43s) I avoid getting a fast carrot so I can stick around for the rockets and stay at the corner of this rollercoaster. Have exit pod issues that cost ~1s

4-1 (38s) Start with a jump so you avoid momentum build. Grab twister for boss, theres a faster way to climb the tower but is more risky and is only useful in extra mode since a triple jump can reach the top of the tower. I use the rock that can reach cabin roof, but I missed the peak of the rock so I only make it to the cabin platform (which is still ok)

4-2 (56s) Great rng, grab 2nd twister at sunken ship. Only level issue is I tried to strafe too soon and jumped instead going down the final vertical shaft. I like strafing and that addiction cost me a little time.

4-3 (24s) Took rocket damage to remove extra bonus (this is a speedrun originally measured in RTA) but a rocket bounce ruins predictable triple jump landing pattern for a faster kill.

5-1 (76s) Worst level of the game and I started falling too soon for rockets but bounce on a fly, if it wasn't there I'd skip and grab roman candle in 5-2. Lots of things can go wrong but very little can benefit a speedrun. Bad fly rng lost about 3-4s to my average of 1:12 for the level. Also struggled to get on the exit pod

5-2 (57s) Have 3 weapons from 5-1 so I skip roman candle, grab carrots and make a full lap around grabing the power pill for motivational effect (no real use with this route.)

5-3 (47s) Worst boss luck you can get, you will die if you don't get out of a few blast radiuses, scraped by with little health.

6-1 (60s) Tied for PB grabing weapons for dark robbit. Most people never try using the crystals as platforms to jump from and take the long way around.

6-2 (22s) Not the fastest pattern, but sub 25 is really good if he doesn't spam high jumps for you. You can get the sub-20 if he just does high jumps the entire fight.

6-3 (59s) Baron Aloha, or what I call when done well Lap runner. I start with an unorthodox try again to get a free bomb (like in time attack mode.) This battle field is divided into four sections (like four square) and you make him run in circles while jumping on his head with triple jumps (or double if I think I will miss) I miss the last landing but hey, fight still sub 1m

Baron flies away, Muu says my work isn't done yet, and then you unlock Extra "arranged" levels. Outside of 2 or 3 small navigational issues that cost about 5-6s in game time, the fast boss kills more then make up for those tiny mistakes. I didn't show me saving, b/c all that happens is "your memory card is full" and the only other spot I can save on has my time attack times that I don't want to lose, and to prevent looking like a clutz, I removed to right after the cutscene. Extra levels can be done from any completed normal game save. You'll see it load once I get extra levels run to submit. Thanks for watching and hope you enjoyed the run.