Released in August of 1993, Jurassic Park was hailed for its realistic graphics. Unfortunately the gameplay suffered from stiff controls. You can choose Dr. Grant and try to get the dinosaur situation under control, or choose the Raptor and fight to escape from the island. 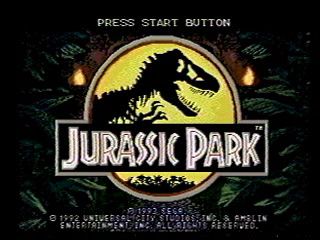 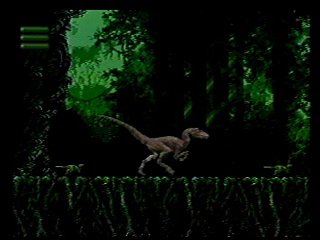 Thanks to :
InsipidMuckyWater for being the first to submit a run on this game.
Cpadolf and Ideamagnate who did a TAS of this game.
Their TAS helped me a lot to make improvements.
Le joueur du Grenier, a french youtuber who did a video on this game, which I could see how to beat the obscure final boss.
Nate for verifying my video.
Steven Spielberg for making the film Jurassic Park, one of the best film ever.

I had a lot of trouble with the randomness of the game, in particular some enemies who seems to attack randomly.
I kill the enemies by jumping at them, it's the fastest way actually to kill them.
The attacks of the raptor are slower, so I only use them to kick the rock at the final boss.

I used some wall clips at the 3rd and 5th stage of the game.
I used a yoshi jump at the third stage.
I named it yoshi jump, because the raptor can jump while falling when the animation of the jump has already begun, where the raptor movements look like Yoshi's.
Sometimes, I don't kill enemies, but I cross them.
I take damage by doing that, but It can save time in some situations.

It was ok.
Sometimes, the first guy can be killed without slowing down the raptor, but it looks a little random.
I deliberately go into the spikes to make a better jump.
It's possible to make the same jump without being hit by the spikes, by doing a high jump at the top right of the platform, but it's like a frame perfect jump.
And even if you succeed to make it, the enemies have a tendency to hit you just after this jump, so it's not really useful.
By hitting myself, I lose half a second, but enemies attacks are previsible and dodgable.

This was not bad, I only lost like 1 second.
The first high jump could be a little bit better by holding right earlier.
Same for the second high jump later.
The last guy is random.
Sometimes he shoots once, sometimes twice (that hit the raptor only once anyway, because he can't be hit twice for a short period), sometimes he doesn't shoot at all.
Here he shot once.
Jumping over the missile while running is not possible, so it's better to leave him hit the raptor, because you loose more time if you are jumping.

One of the most frustrating stage of the game.
I was happy to succeed with the 2 firsts jumps perfectly.
I failed a jump after I killed a guy.
I should directly hang on the highest platform, but I was not enough to the right to make it.
But with a high yoshi jump, I could go up fastly.
Fortunately, I lost less than one second here, so I continued my run.

I used a glitch to pass a wall by doing a short jump, turn round to the left, and turn round to the right.
By doing this, the raptor's hitbox pass the wall.
You can do it on nearly all the walls of the game, but you need enough space to do it.
That's why I killed the 2 humans before going left to have enough space to pass the wall.
This glitch is not hard to do once you know how to do it.

After this, I used a safe strat.
At the top platform, I could jump directly to the bottom platform, but it's really hard because you generally end up dying or hang on to the plaftorm at the right.
So I used a safe strat instead and jumped at the lower platformer before jumping at the bottom one.
I lost less than 2 seconds in total, which is not bad considering the difficulty to run this level.

The first jump is harder that it looks.
You need to high jump at the very beginning and immediately go right.
It's possible at the end to do the wall glitch to go faster instead of jumping on the top platform, but it implies killing the 2 guys before.
At the very end, normally, the raptor hits the ground, whick breaks with the weight.
But, by turning left at some position, the raptor can cross the platform without breaking it, which saves a few time.
I don't succeed everytime, so I was happy to do it on this run.

Another wall glitch.
Normally I pass the wall at the top platform, but here, I falled, so I had to jump at the top door.
The thing is that if I succeeded to go to the top platform directly, I would have to crouch the raptor, and you loose some time.
But here, I didn't have to crouch, because I directly crossed the wall.
So I don't know if I really lost time here, it was the very first time this occured.
Normally you are not supposed to be here, but the top door is considered as a door you can take, so you can use it to go to the second part of the stage, gaining a lot of time.
If you ask why I didn't take the the bottom then, it's because this door leads to death, because this door is not programmed as an exit door, but as an entry door.
So if I take the bottom door, I die by falling or even worse, sometimes I can fall forever without ever dying.

In the second part, I failed 2 jumps, one in particular where I can jump over an enemy instead of killing him.
Not a big lost of time anyway.

In the third part, I take the same door as in the first part.
Perfect here.

In the fourth part, I did perfect, except the last jump over the hole I failed.
After all this run, I was really unhappy to fail the last jump, which is not the hardest one of the game.

The final boss was perfect.

In conclusion :
I think the run is improvable for ~4-5 seconds, but this run is already an improvement of more that 40 seconds of the previous one, with better strats.
Maybe there are some strats I didn't found, but I've worked a lot to find the fastest route.
The gameplay is so weird sometimes and the game is so random that I'm really satisfied with this time as my first submission for SDA.
At first, I thought sub 3 min was nearly impossible, but now I did it, yeah it was definitely possible. :V

This run was made on a trusty Mega Drive Model 1 (PAL). Thanks for still working so well after so many years

A big thanks to the SDA staff for maintaining and running this site!

This was one of those games which I found really hard back when I was a kid. Of course I'm not talking about the easy raptor missions which I was able to complete with no problems. No, the Grant missions with it's iffy physics and abundance of tricky jumps combined with some heavy slowdowns is what really made this game annoyingly hard. Replaying those games you used to consider hard several years later tend to lower your view of the overall difficulty though. I still consider it annoying however.

The most notable thing when playing on hard is that weapon pickups only give 5 ammo instead of the 10 you get on normal and 15 on easy. Damage taken is also alot higher and the dinosaurs also stay sedated for a shorter period of time but this doesn't affect the speedrun in any way since I never stay that long in an area. Also you seem to be getting less fuel from pickups in the river stage

There are several random events that affect the speed of the run. For most of these events if it didn't turn up favourable enough, I restarted. Some of the events outcomes I ignore and others I eliminate.

There was no previous work to be found for the Grant missions so I had to invent the tactics and skips myself.
Grant will take alot of fall damage as opposed to the raptor. The game also defines a maximum distance you are allowed to fall. When you breach that limit the game triggers what I call a fall-to-death animation (FTDA) which will kill you even though the fall itself would not have done enough damage to kill you. I abuse the fact that shooting in the air resets your fall distance which allows me to make certain long falls.
The game relies heavily on the same animation to instantly trigger when you go down certain pits the developers didn't want you to enter. This is also abused at some parts of the game.

Runs ended by the randomness of the very first tricera in the jungle: 21
Big boat jumps failed: 15
Times eaten by a T-rex: 2
Deaths caused by the lurking sewer crate: 9
Hours of recording: 20+
Runs screwed up at the visitors center: 2
Runs screwed up approximately 4 seconds before the end: 1
Hours of recording if above mentioned screw-ups never would have taken place: 8
Times thrown into the water by the River tricera: 4