Kendo Rage is a 1993 SNES action platform fighting game or something like that. It's so obscure even Wikipedia has no useful information for this intro paragraph. 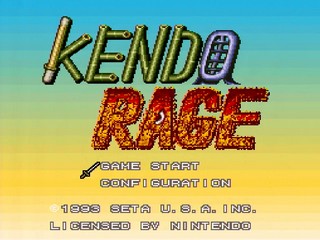 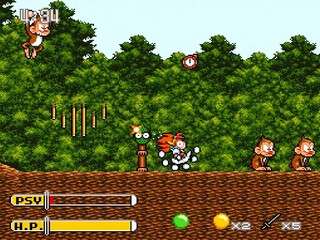 Kendo Rage is a stupidly annoying game to run. Every stage has one or more critical pieces that force a reset on a failure. Most of it comes down to cues and proper planning, but so much can go wrong that it's unlikely for any run to be perfect. That said, I feel like I got "enough" right in this run to make it worthy of a submission.

This run was done on Normal difficulty since it allows HP refill items and enemies still move normal speed. Hard difficulty removes some extra lives, HP refills, and makes enemies have more HP and move faster. It made more sense to do Normal simply because there were more routing options due to HP refills. Hard mode would require an entirely different route and be a different category.

You can only build up to maximum running speed when using a slope. When not on a slope, your speed gradually decreases except when jumping. Getting hit or ducking forces your current speed to 0.

Basic attacks do 1-4 damage depending on your current PSY charge. Full charge with Green Orb does 4 damage, 2 damage for half-charge, and 1 damage for anything else. It takes 4 seconds to charge up a full charge, so it's generally better just to keep swinging on a boss. Dash attack uses 8 HP (of 40) and does 3 damage for each hit. You can hit twice if you have proper positioning and timing.

Deaths restore full HP, which is useful in some cases (particularly the last stage). Each death in the run is intentional so that I can regain HP and thus use more dash attacks. I also go out of my way to pick up extra lives at points also for this reason.

Stage 1:
-First hit with the ghost was unfortunate, but it's somewhat random if I can successfully clear that last ghost. There's a frame rule that determines whether I get hit or not. Otherwise a good stage.

Stage 2:
-I don't typically get hit by that Kroakie, but not a run-killer since I hadn't built up any speed yet. Probably lost 1 second from the mistake.

Stage 3:
-Great stage. No issues throughout the stage, and the boss battle went perfectly. It is one of the trickiest quick kills in the game.

Stage 4:
-I don't usually get 2 Yellows in this stage, but the opportunity presented itself and it paid off later. Otherwise no problems in the stage and I nailed the boss quick-kill.

Stage 5:
-The crux of this stage is going into the train screen with full run speed. The hill has some really tight timings, but I made it through to the boss without incident. Boss could have gone a bit better (saved ~5 sec), but I'm satisfied with it.

Stage 6:
-Building up speed on the stairs looks ugly, but it's needed to get through the second part. If I didn't botch it at least. The extra Yellow came in handy to absorb the hit though, which otherwise would have killed the run. The boss can only be hit by her own projectiles, but she gave me a good pattern during the spin for a double-hit.

Stage 7:
-First death is intentional, although I had one mis-step on the first refight.
-Fish refight went perfectly, and is also really tricky to pull off. Death there is also intentional.
-Toyminator refight I missed the last hit and took an unintentional death, but it worked out well for later. The extra hit at the end was also unfortunate.
-No problems with Dr. Whoo refight, although I could have expended some more dash attacks to speed it up. I didn't want to risk not having enough lives to finish the last boss though.
-Final boss first form went great. Proper rhythm is needed to optimize that portion. Second form I could only do 3 dashes on, but I got double hits on all of them which really speeds the phase up. Third phase death was not intentional, but it needed to happen at some point since I pulled off the first two phases without a death. Finishing with one extra life means things aren't completely optimized yet, but I'm fine with the end result.