Released in 1991, Kick Master deviated from most action platformers by putting kicking skills at the forefront, rather than lame punching skills. The game also features an rpg-esque experience and magic system. As Thonolan, you and your brother Macren attempt to take revenge on Belzed's troops, who razed the kingdom of Lowrel. However, Macren's steel isn't good enough, and it's up to Thonolan's kicking skill to avenge the kingdom of Lowrel and save princess Silphee. 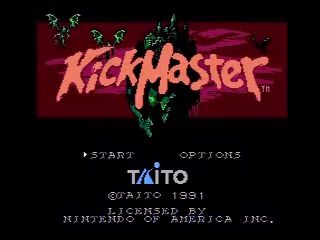 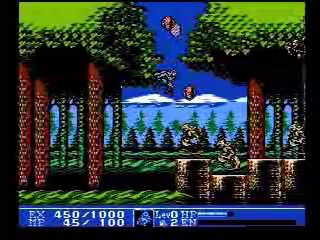 First off, I'd like to thank my wife, Anna, for encouraging me to keep playing video games and even to speedrun some of them. Love ya, Babe!

This run of KickMaster really wasn't intended to be record setting. Originally I was just practicing this game in case it made it to SGDQ 2014. But as I practiced, it became clearer that I could go all the way to get a new record. What you see here is the result of that.

Some of the game mechanics in KickMaster include your standard RPG stuff: Experience Points, Levels, HP and MP. Every 1000 experience points you gather increases your level by 1, your HP bar by 1, and your maximum MP by 100. Additionally, every level unlocks a new kick for your arsenal.

For a speedrun, you want to ultimately reach level 3 to get the Double Front Kick - arguably the strongest kick in the game. Fortunately, you only really need it for the boss of stage 7 and onwards. However, the Slide Kick, unlocked at level 2, dramatically increases your movement speed and thus needs to be unlocked as soon as possible. This means that I need good exp drops from the foes and will basically farm them throughout the first two stages. The Knee Drop, unlocked at level 1, is a favored attack throughout the game as not only does it deal decent damage, but you can chain it and stun enemies (including bosses).

Anyways, how about a breakdown of the run?

What items a foe drops is random. Ideally, you want to get a lot of the 50 exp shields for maximum exp gain. As an additional condition, you don't want the exp items to fly to the left, as that means backtracking a little to get them. Having the exp items fly to the right is perfect, straight up is okay.

I gauge whether I'm doing well with my exp gain by checking how much I have at two points in this stage - when I get the Bubble Magic and when I get the Healing 1 Magic. If I have at least 430 exp at the Bubble Magic and at least 1200 exp after the boss. In this run, I have 470 exp at the magic and 1360 exp after the boss, so I got a lot of extra exp, which is great.

Now you'll see the Knee Drop be used more and more as my main means of attack. In this stage, I only have one checkpoint: the swamp where the bats and frogs are. I want to reach level 2 (2000 exp) as early as I can in the swamp. If I made it to the end of the swamp and didn't reach level 2, then it was an instant reset.

Once I reached level 2, you'll see me just start Slide Kicking everywhere. At this point the only exp that I worry about is from bosses. I also start to turn my focus a little to getting the MP potions.

Collecting the magic spells themselves can have the added benefit of warping you to the next checkpoint in the stage. Sometimes it is a great distance, and sometimes...not as much.

The boss here isn't vulnerable until a second or two after the last wolf is killed. Luckily, I was able to kill the fourth wolf early, so that saved a second or three there.

On the first mini-boss, you'll see me use a Vertical Press Kick into Knee Drop combo. When the foe is too high in the air to chain Knee Drops, this alternative is the best option.

The boss for this stage is really easy if you chain Knee Drops on his head.

This stage presents my first major threats: Birds (it is always the birds that cause problems, isn't it?) and Spires. A hit from either of them can knock me into a pit and ruin a run. I take it a little slow during the second half so as to manipulate the birds and time my movements to avoid the spires.

The boss fight isn't ideal, but thankfully I didn't lose a lot of time.

This mini-boss in particular loves to mess with me. Between the up-and-down movement of the stage and his arcing movement, it can be difficult to get him in one go. Thankfully, I got him in two.

The boss here isn't difficult by himself...it's those dang bubbles that rain from the sky that are the problem! There is no recognizable pattern to them and they deal a good amount of damage. Like the wolf boss from stage 2, this guy isn't vulnerable until you take out his tentacles. At least the bubbles didn't damage me after the magic appeared.

I can't say exactly why, but this stage is my favorite stage. Maybe it is because it is so straight-forward. No mini-bosses to worry about, and you can Slide Kick nearly the entire stage.

Ideally you should be able to Knee Drop chain each harpy without an issue. But because they have the same pattern as the first mini-boss from the previous stage, I lose the chain. At least I ended the stage with 2990 out of the 3000 exp I need for the run. That meant that I had good exp drops from the bosses.

This is where I normally check my exp and try to make up the difference to 3000. But since I was only 10 exp away, I didn't worry about exp until it was most convienient to obtain.

Another straight-forward stage, with no pits, hills, or anything other than foes to get in your way. Well, Slide Kicking kinda skips a lot of that. This stage also features the mini-boss rush. 5 mini-bosses until the real boss appears. Thankfully, they all go down quickly.

Sadly, this wasn't my greatest boss fight. It was still good, but no perfect.

The final stage is very dangerous. Not only to all three mini-bosses deal a large amount of damage, but in the upward portions of the stage, platforms immediately despawn as soon as they are underneath the status bar. That means that you have death pits everywhere. Not only that, but during the third and final vertical ascent, you have those random bubbles from stage 5 falling on you! Cruel, cruel bubbles. At least the mini-bosses can be stunned for about 10 seconds via Earthquake.

Like any good final boss, she makes you fight four minions before she attacks. The guards will change forms as they take damage. You can Knee Drop chain them, but if they change to the armadillo form, they usually will roll out of the way. Sadly, this happened twice.

As for Belezed herself: they really shouldn't make her vulnerable to Earthquake. :P

Well, I'm glad that I did it. KickMaster is a fun, challenging game. Everyone should at least try it out once. I mean, where else are your kicks more powerful than steel swords and cause foes to explode into items?

See ya next speedrun!