Kid Chameleon, or if your 1992 self was Japanese, Chameleon Kid had a lot of creativity thrown its way at the committee meetings at the Sega Technical Institute. The Kid could transform into a dozen different forms with fitting attacks and abilities. There were allegedly hundreds of levels, a count that still stands at 103 after exhaustive searches into all the game's myriad secrets by a devoted community. It was also considered hard to beat, because it featured very tricky platforming and NO SAVING OR PASSWORDS. 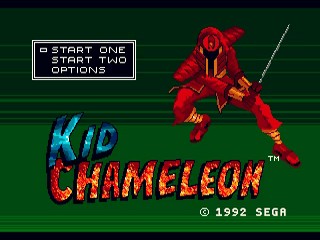 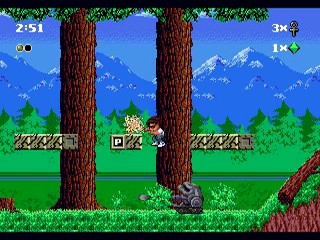 This category beats the game using the secret "Plethora Warp" at the end of the second level, which warps you all the way to the final boss. Comes in handy considering this game has 103 levels :P Since activating the warp requires some arbitrary setup (holding Down + Jump at the right edge of the last block in the second level), it is often considered a cheat. However, that hasn't stopped Any% from being an interesting category to run. For instance, the strategy used on the final boss would NEVER be consistent enough to perform during a longer category.

The first speedrun of any game I ever did started with this category back in July of 2012. The time then was 1:55.03, which I thought was the most based thing ever... but we all know now that it sucked. Thanks to many strats discovered by various people (and better skill for myself), the record has been improved by just over 21 seconds since then to a 1:33.80.

You know, I could go REALLY in-depth and technical into all the strats that nobody would really notice upon first view, but I will leave all that explanation until I make an Any% tutorial on Youtube.

What I kinda just want to do here is credit all the people who had a major hand in the making of this. First person I'd like to thank is peaches for being the first to actually run this category, and realizing that collecting the diamond on Blue Lake Woods I is actually faster to massively reduce the time spent on score tally screens. Second person is Kitchengun for the absolutely godlike Plethora strat he discovered, which has since evolved into the super fast and furious (and precarious) beating that you see here.

Lastly, I'd like to thank the TASers TheRandomPie_IV and Truncated, whom I've been working on making a TAS for this category with as of late. The original plan was to make a TAS such that I could learn enough microstrats to push this category below 1:35. Obviously, it went better than expected. Some of the strats implemented include collecting a diamond from the first instead of the second prize block in BLW1, reduced deceleration running up inclines, and making the final section of BLW1, three sections in BLW2, and the entirety of Plethora more consistent. The TAS is not yet finished, but RandomPie and Truncated have done an amazing job explaining stuff to me (it is my first TAS). That being said, the current RTA-converted time in our TAS so far is 1:31.05, meaning that this run is nearly spotless.

Besides losing a couple frames here and there from unoptimal movement (which obviously can't be helped), there's really only two ways this run could have been improved. First is a ~0.25 second timesave at the last rock block platform of BLW1. Had I jumped on the exact frame I landed, I could have conserved Kid's massive momentum and jump from there to the next dragon. Given how hard that is to get right along with every other strat, I have no regrets for missing it. Also, while Plethora is super fast, I could have improved it by ~1.5 seconds using this method: https://www.youtube.com/watch?v=DlBXMa72K00 However, that was the only time I was ever able to nail a 2:27 IGT, and it was after 1.5 hours of grinding. That being said, it really isn't even viable to go for in a run this short.

Once again, thanks to everyone who helped out, y'all don't realize how much it means to me to finally have a near-spotless run of this category. And be sure to keep your eyes peeled for when the Any% tutorial and TAS gets published!