Exploding onto the scene in 1987, Kid Niki: Radical Ninja is a bodacious adventure featuring the mondo mullet leotard stylings of everyone's favorite dude, Niki. Using his weapon, the Shredder, a gnarly windmill shuriken, Kid Niki clashes with mental mimes and bogus teenage mutant polka dancing turtles (barf me out!) so he can rescue his bitch'n babe and make it to second base. 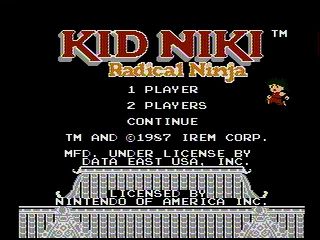 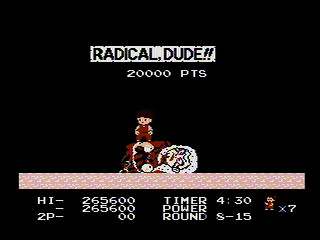 I completed a 13:08 run of Kid Niki: Radical Ninja back in January of 2007, and the run spent months in verification purgatory. By the time enough verifiers were found, some faster strategies were discovered, and I decided not to submit the run. Now, two years later, I finally decided to speedrun this game again and completed a run that is about a minute and a half faster than my initial 13:08 run.

I've liked this game since I was a kid. It contains some kooky stuff, such as a karate-chopping cat; a mountain that gives you the finger; and Mad Monk, who calls Kid Niki a fool and drops F-bombs. Mad Monk doesn't get to show off any of his attacks in this run, though, because I kill him quickly (this boss fight is probably the highlight of the run).

This game has horrible collision detection. One example occurs at the beginning of stage three: I clearly touch the second cat-on-boulder, but the game doesn't register this fact.

During boss fights, your sword will fly out of your hands when you hit the boss, and you have to take time to retrieve your weapon. Every once in a while, however, you will hit a boss and not lose your sword. This happens once during the stage-four boss fight and saves a bit of time because I am able to hit the boss twice in one cycle.

There is a "shortcut" in stage four that I've always loved, but using it actually takes longer, so I don't use it in this run. But you can view the so-called shortcut here: http://www.youtube.com/watch?v=wMdolFR1u1I

For anyone who likes to compare TAS times to non-TAS times, there is a Kid Niki TAS with a time of 10:33.85 that was rejected by tasvideos.org. (I don't know of any other TAS that has been done of Kid Niki.) Details can be found here: http://tasvideos.org/1105S.html