This 1986 Zelda-like game requires you to visit 8 worlds, grab 8 keys, and head to world 9 to open the door to the final boss. One of many Famicom exclusive Konami games, it's loosely based on the film "King Kong Lives" which came out the same year. You play as the titular ape, hell bent on rescuing the love of your life. I love Lady Kong! 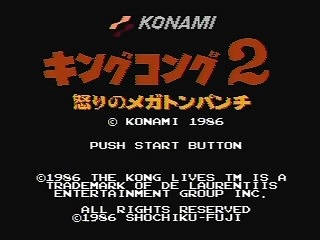 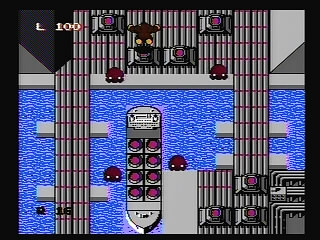 Damage-boosting through the final door skips collecting all 8 keys normally needed to win. It's incredibly easy to pull off, yet it was the cause of much frustration. It's very hard to get through the door in only two shots. You need some luck (or maybe I just don't know the proper positioning to manipulate the enemy).

Improvements? I should've just jumped over the enemy at the start of the 7th world, and I'm not sure if the last speed potion really makes a difference. Double jumping could be perfected as well - normally, you can't jump from certain surfaces, but it's possible if you jump just as you land from another jump.

When I first played this, it was annoying not to have any way to save your progress. But once you're familiar with it, it's easy to beat it quickly. (strategywiki.org has excellent maps and a guide).

The invulnerability you get on every single screen upon entering really helps out. The fact that items/doors aren't revealed until you move out of the way doesn't. Also, there's the nice way the game restores your HP after beating each boss.

Yes, the in-game timer is way off.