Released in March, Kingdom Hearts II sold a million copies within a month of its release, probably because the unholy alliance of Square and Disney was irresistible. Like most Square games, you wander through a world populated with pretty boys and end up fighting a really powerful one at the end of the game. Incidentally, everything above could be copied directly to describe the first game. 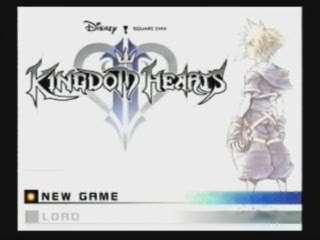 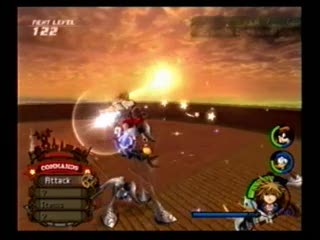 Note: There is no high quality for the single-segment run because the runner used a bad capturing device (Gamebridge).

This run, like the last, is dedicated to an old friend of mine who went far too soon. Scott, thanks for all the times you made me laugh, and I wish I had gotten to know you better before you left us. My memories of you will last forever even though you may not be beside us in person. I love you buddy.

Well, here it is a run that has really made me wonder how my first KH2 run ever got accepted. Not long after my 5:06 run was released, I started playing the game again and quickly realized through other members and my own discoveries, that the last run was horribly rushed and was a very lazy excuse for a speed run. In this run, nearly every boss battle is improved upon at least slightly, and many of them(such as Xaldin, Xigbar, Genie Jafar, Hydra, Dark Thorn, and almost every other boss) are improved by a large amount of time. To be honest this run itself could still be improved by probably another 10 minutes at least. I should have had Combo Boost attached earlier in the run to make Explosion more powerful. Also, I tried AquaTiger's strategy of gettting a Soldier Earring, but the problem was that I need to pick up about 20 different items to be able to synthesize that, not to mention 5 specific items just to make it. At the earliest I could get it, I would already have both the Medal and Sardonyx Ring attached, each giving me +1 Attack. Anything I could synthesize would only give me +2 Attack, and once again, that would require me randomly getting at least 20 different items, meaning I would have to segment the hell out of this run just to give myself a chance of picking up all of these items. All that and I think the time spent getting them would cancel out anytime the 1 extra attack(since I wouldn't have a spot for it, meaning I would have to take off one of my +1 Accessories anyways) would give me. All of that being said, someone could try it, it's just not going to be unless there's any easier way to do it.

Anyways, I'm glad to finally improve upon my old run by what looks like 26 minutes(bringing the time down to 4:40 Final Blow). On to individual segment comments:

Overall, this run makes me feel a lot better about my Kingdom Hearts 2 speed capabilities. While the run was my first, it looked a little bit too much like one that shouldn't have been accepted on Speed Demos, and it admittingly was a lazy run from the planning stages. thank everyone for their support on the boards and I hope everyone enjoys it.

I wish the best of luck to Axel-Ryman and his Single Segment Kindom Hearts 2 run, and I send out a request for a Kingdom Hearts run to a certain Final Fantasy IX master.

As for me I'm thinking about letting this game collect a little dust in my game box for a while, as i want to try a Rayman 2 N64 run. Although I'm sure this won't be the last you see of me running this game.

First things first, got to thank those who helped, starting with those that run this site.

Next are those that aided me in my run.

Welcome to a 5 hour long action filled no cutscenes start to finish speedrun of KH2.

This run took months, way longer than I planned due to life things such as work and school.

Without some of the mistakes, sub 4:50 is possible, though you need to be pretty lucky. Some of my battles went well, and others (COUGHSAIXCOUGH) didn't.

I'd include the Saix battle, but that was the worst one I've ever done somehow(Without dying I mean).

If you have questions or comments, either PM me, post in the KH2 Speedrun thread, or contact me via MSN (axel_ryman AT hotmail DOT com).

Will I redo this? Maybe. If someone can urge me to redo it, I'll do better...I hope.