Released in June 2000, Kirby 64: The Crystal Shards is a 2.5 dimensional, side-scrolling adventure game featuring Kirby, our little pink hero. This time around, it's up to Kirby to collect the seventy-four Crystal Shards and save the fairies' home, Ripple Star. 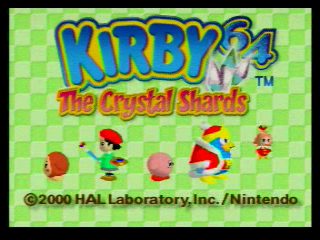 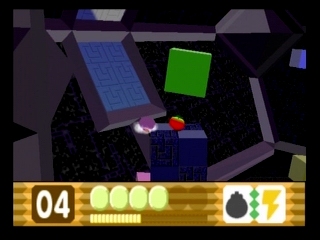 Kirby 64 is very nostalgic for me, perhaps more so than 90s cartoons. I literally never get bored playing it, with the large amount of powers and fun bosses. I remember the first time I got all the shards and fought the final boss, it was so epic. Anyway, enough of me being nostalgic, onto the level comments / random thoughts.

Whispy Woods - Could have gone better, he did the apple "attack" first thing on the second phase which loses about 4 seconds.

2-1 - I got excellent luck on that electric enemy, usually it bounces in a bad direction but this time it came to me.

2-2 - The jump during the Dedede part was to make the fire enemies attack, so I didn't have to wait for the second one to get done attacking after I get the shard.

2-3 - Thank goodness for the stun enemy by jumping under them trick, those bat enemies used to drive me batty.

Pix - Hope you like my dancing and HORRIBLE dodging. At least it's an autoscroller. Also during the autoscrolling part, I moonwalk, something that IIRC cannot be done with the N64 controller.

3-2 - As far as I know there's no way to speed up the segments where you ride with Waddle Dee. I very nearly lost my fire ability when I jumped into the platform above and that would have been bad.

3-3 - I needed Rick the hamster for the wall climbing, getting him on the second try was very lucky.

3-4 - My good luck came back to bite me with those freaking boulders. Had to lose my power to get the shard, costing about 18 seconds.

4-1 - This level is a double fire nightmare, so many traps and enemies waiting to hit you the moment you're vulnerable. I need to make a better path.

4-2 - Missed with the dynamite twice, costing around 9 seconds. And screw those Zeus enemies.

4-3 - Kirby can headbutt falling rocks and arrows, yet remain unharmed. He may as well just headbutt everything in his path. I missed with spitting the enemy to get the curleh stone, costing about 10 seconds.

Magman - Got bad luck during phase 1, he didn't do the attack that allows me to damage him the most.

5-2 - The electric enemy can sometimes bounce off the level, which means I have to backtrack a little to make it respawn.

5-3 - The colors you have to press barely match the fruit shown. Seriously, what IS that second fruit and why is it brown? And why does Adeleine know what a lemon is?

6-2 - The memory lapse only costed about 5 seconds. I didn't remember this level at all until I entered it but I still did decently.

6-3 - That is NOT how to use fire arrows =( in retrospect I could have gotten electric + cutter in the second to final room, which would have saved lots of time. Also the last room was awful.

Miracle Matter - The last two powers alive were electric and cutter so I could have, again, gotten electric + cutter, but nooooo... wait a sec, I literally had the power in my mouth? gah

02 - It may be possible to win on the first rotation, but I haven't done it. It would certainly be a large improvement!

In closing, this was a lot of fun to do and took 2 years of on and off playing. I'm probably gonna improve it sometime, maybe later this year. Until then, adios!