Kirby's original GBA adventure took its sweet time arriving in North America, touching down in October 2004 - 6 months after the Japanese release and 3 months after even the European release. Trouble is brewing in the mirror world, and Kirby's been split into four by Meta-Knight's sword for no adequately explained reason. While the four Kirbys are an almost useless gimmick, the non-linear, almost labyrinthine world provides the real meat. 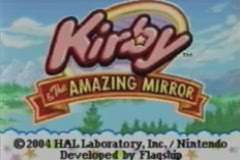 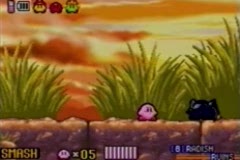 Note: Timing ends when the final hit is landed on Dark Mind because the credits minigame is of no consequence.

Kirby and the Amazing Mirror is a really fun game that I enjoyed in 2006. In September 2006, I started working on a 1 player any% speed run for the site. Things were going well, but then a man by the name of "Gigafrost" showed up. I knew him from over at TAS Videos, but I was a bit surprised to see that he had done a speed run of this game as well...and that he beat my time by a good margin. The competition made me work harder and I started to get close, but then he pulled out an impressive run that put him 8 minutes ahead of me - at that time, an impossible margin for me to beat. I graciously admitted defeat and told him to submit. That was September 16th, 2006.

When his video first appeared, something did kinda bug me that it was beatable, but I wasn't sure what back then.

Finally, in March 2008, I picked up Kirby again after finishing up my Kirby: Nightmare in Dream Land run. At that time, I was only just fooling around with a 1P 100% run, but again, that creepy feeling about the any% run came back up, so I redownloaded the video. I watched it carefully (since I had all my maps and such back out for working on that 100% run) and I figured it out - the route. Some of his pathways were really roundabout routes, most notably Area 4.

Knowing this, I took one night at work and plotted a new route. I was left with a couple options, but I chose the one that I felt would be the most efficient. I did a little testing then, but never really a full run, until I got home and started recording.

And I did it - I beat his run. At the time, it was only by a few seconds, but then I knew my route was good. I still had some flubs in, so I knew I had to rerun it later. I finished up a good recording in March and submitted it and put the game aside for a while. But when MUGG and girfanatic501 started working on and discussing a 100% TAS, I picked up the game again and fooled around with it. Around this time, I was getting a few questions about some oddities in my speed run (but nothing illegal, mind you). Plus with my mess up in Waddle Doo Lane (the room just before Area 9's inner warp star), I decided to fool around some more with this. I tried over and over to beat my time, but I kept falling short (the closest being 12 seconds). Then, on a whim, I decided to make one tweak in my route - at the start of Area 9, I headed left (following Gigafrost's route) instead of going right. This, plus figuring out a method to handle Waddle Doo Lane lead to an improvement of a little over 30 seconds to my old run, thus breaking the 41 minute mark as well.

There are really only 3 major flaws in the run, and even then they only cost a little time:

1 - I blundered a bit near the end of Area 9, getting hit by Roly-Poly, and fuddling around a bit trying to get UFO back.
2 - At the end of Area 4, I got too close to that grey Golem. Because he was in his upper-cut move, instead of getting Stone (what I wanted) instead I get Fighter. This slows down the Batafire battle a bit, but I make due. I had a slight pause before I swallowed Golem because I was thinking "Oh s***."
3 - Getting hit by that damn umbrella carrying Waddle Doo in Area 8. I knew better than to float on the left side there.

One big difference, besides the route, you may notice compared to Gigafrost's run is that I hardly use Smash. His run was almost completely dependant on the use of Smash. For me, I use it on 1 boss and that's it (he used it on every boss except Mega Titan and Gabriel). All other bosses have a better tactic, plus not having to rely on it frees me up for use of abilities that allow for faster motion through the levels (such as Wheel, Burning, and UFO).

I hope everybody enjoys this run. A lot of thought went into making this work and a lot of heart as well. Plus my nice new comfy gaming chair my wife got me for my birthday. With cool soft speakers built into the headrest. Though admitably, I didn't use them for this run. Hell, I didn't even listen to the game at all while I was running...I had my headphones plugged into my PSP for music from completely different games (IOW, if my ADD seems out of tune with the game, it was because I was rocking to a completely different piece of music).

And one last note, mini-game score was 114, though my record is 128 (as done in my cancelled submission). I lose to Gigafrost by 1 point. Boo hiss.

Big thanks to KindarSpirit for his maps, as they were a HUGE help in this run.

This run is Copyright (C) 2008 Nicholas "Sir VG" Hoppe and is allowed for downloading and private viewing. Permissions for hosting this run have been granted to Radix and Speed Demos Archive. Public viewing of this run is prohibited without prior permission from the creator. The selling or distribution of this run for profit in any way, shape, or form including (but not limited to) selling on eBay and television for profit is prohibited without prior permission from the author. Video hosting sites (i.e. YouTube, etc) may host this video in part or in full, as long as full permission is granted from the author. Any violation of the above listed may result in legal action. Kirby and the Amazing Mirror is (C) 2004 HAL Laboratory, Inc./Nintendo.