Yes, the 2000 PC game called KISS Psycho Circus: The Nightmare Child was in fact inspired by the band KISS. The plot involves a tribute band that suddenly receives superhuman powers. And then, of course, the Nightmare Child shows up. 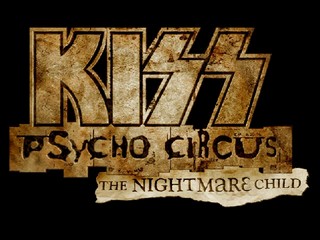 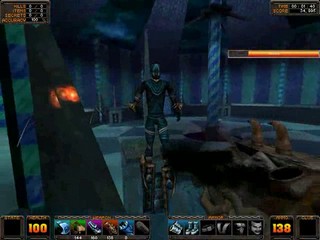 So this is it. Kiss Psycho Circus. It took me almost two years to find out that the game has a final level and boss - the nightmare child (surprise).
In order to get to the final level you have to play the four guys in this game in the right order, starting with the starbearer. Something i have
never done apparently - even when i first started playing/speedrunning this game. To be fair, i picked this game up again just a few weeks ago to work on
a new optimized run during the time when barely any good games are released aka the summer. My last time was ~53 minutes WITHOUT the last level so i cut
off a good 5 minutes. I chose the easiest difficulty again, simply to reduce the sheer amount of enemies (as if they werent annoying enough on this one).
Some segments are really short but needed because of the ridiculous randomness of the game. (Enemy spawns etc.) Some cutscenes are skippable and some are
not, of course i skipped every cutscene possible. I kept recording once the awkward outro starts since it was the first time the game didnt crash at that point.

Stage 1:
Picking up the gauntlets (?) is necessary to be able to pick up other items from that point on and to have a melee weapon. Other accessoires, like the boots
for example have the same effect but i couldnt even get out of that first room without the gauntlets because i cant smash that window with my bare fists.
(Dont ask me why.) Jumping down and destroying the barrels is faster than going for the door key. You can easily skip getting the boots by jumping on an
enemy to get the gate key but they are the most important item in the entire run since they let you jump higher and further. Something you really want to
have in a game that uses the old quake engine ;)
And unlike with weapons, there is no other way to get these items later in another stage.

Stage 2:
Plenty of enemies, mostly indoor. The games worst aspects. Got stuck here and there but still finished decently. Not much to say here.

Stage 3:
I dont need the rope for the rest of the starbearers run but i couldnt find a way of skipping it. There is a chance of boosting yourself with a jack-in-a-box
to the right of the cathedral entrance but it doesnt go high enough. I also pick up the rocket launcher near the unipsycho, i will need it later for the bossfight.
The starbearer has the most enemy introductions (since its the first part of the game) and therefore has lots of unskippable cutscenes as you can see :/
I do a corner jump to get to the star weapon that is guarded by a clown, if you dont circle around it you end up crashing against an invisible wall.
On the stairs i use jack-in-a-box to boost myself (the normal way here is to kill the fat lady to the left of you and then wait for the water to rise, that
takes a lot of time). Besides of one headless standing in my way, the rest went pretty smoothly.

Stage 4:
Annoying segment, from the beginning to the end. Lots of shooting enemies, in order to open doors to proceed. The boss fight is pretty hard, which is weird
because this is the first one in the game and the 2nd and 4th boss fights are much easier. I still managed to shave off 46 seconds (!) from an earlier
attempt. Overall improvement over my old run: ~1:30

Stage 1:
The beastking is the worst and most annoying part of the game - especially because of morbid manor. Huge improvement here on the first stage, i skip
getting the gate key by boosting myself over it with the help of a headless and a jack-in-a-box. Then i skip the strongman fight and his cutscene, one miss
with the whip is totally acceptable here since it has to be very accurate and the whole segment is very hard (boosting over the gate took a lot of attempts).
Which is also why i split this into two segments. The rest of this stage is mostly straight forward. Boosting over that blue guy at the rock is a very nice
timesaver. Improved my old run of this part by 50 seconds!

Stage 2:
This stage starts off by two great timesavers, the jack-in-a-box-got-stuck boost and the jump over the gate (much harder than it looks). Sadly the rest of
it is just super annoying. You can probably see for yourself. Lots of enemies, high possibility of getting stuck in a door or something, plenty of
cutscenes, only indoor and no shortcuts or whatsoever. The car wasnt suppose to be there in that cutscene btw, this happened for the first time.

Stage 3:
I move around the grave/tomb to avoid a trigger that closes the big sharp gate. Saves a good amount of time. The stump at the stairs appears sometimes and
sometimes not. He is crucial, because killing him opens the next gate. I skip the way to the lever and the body armor next to it. I dont need it anyway.
Going back and forth in the tomb is to start a trigger. Not much else to say here. Jumping on one of the gasbags is another nice trick i found recently and
helped me getting an improvement of over 40 seconds for this stage. I almost lost an entire day by getting that gasbag to remain in the right spot to be
able to jump on it. Very frustrating. It skips a very long cutscene though, so it was worth it.

Stage 4:
Went nearly perfect, didnt even hesitate when i jumped over that fence with the help of a stump. The boss pushed me away one second before i killed him, but
oh well. Overall improvement for the beastking: almost 2 minutes!

Stage 1:
Again, im sure that you can skip getting the boots here but they are way too important. The rope is obviously needed for a nice shortcut where you access the
mirror early. Way to go, developers :). I dont know how, but i was 9 seconds faster than in my old run of this stage.

Stage 2:
Very fast access to the power plant by a jack-in-a-box-got-stuck boost. Inside, i skip picking up the armor by jumping over the trigger from a headless.
(There is no way of jumping over or just walking by it without any help.) The jump through the window to the mirror is very hard. I bumped into the wall but
that just cost me one second. Cut off 7 seconds here, mostly because of the armor skip.

Stage 3:
Annoying part because of the high possibility of falling down. Later in the glass house i skip getting the first key and jump straight to the second key,
and then skip getting another armor part and also the fight against 3 ticklers that appear after you pick it up. The way to the airship should be the fastest
route, the major shortcut here is falling down at that corner where the tickler attacks me. Improvement over old run: 23 seconds.

Stage 4:
The new trick here is a jack-in-a-box-got-stuck boost at the ticket box. Thats the ticket, literally. Pretty hard since you have to press backwards at the
time the boost works and to do the boost you have to press forward and left. Otherwise you crash against the ceiling there. So its all about timing.
The boss fight is without a doubt the hardest in the game, i dont know what they were thinking. Improvement for this stage was 41 seconds, mostly because
of the ticket box boost. Overall improvement for the celestial: Over 1 minute.

Stage 1:
Jumping through the flames is possible without dying only if you strafejump fast enough. I could easily skip the gauntlets and the shotgun, but i desperately
need the shotgun (for the unipsychos at the end of this stage) and in order to pick it up i need the gauntlets. I go back to the first headless and fall
down with it to get to the door. If you fall down alone, you cant access the door - there is an invisible wall. You have to fall at the same time and press
crouch, very hard to pull off. I pick up the boots as always. The big jump after the elevator is pretty hard, especially because the enemies approaching you
are blocking your way. The unipsycho fight seemed pointless without the shotgun, the machine gun does very little damage. Cut off almost 20 seconds here,
mostly because of the trick with the headless at the beginning.

Stage 2:
The big jump over the lava is nothing new but necessary. The normal way here is much longer. In the second part, where the lava is rising, the key jumps
are over the headless spawner and across to the gap. Both of them were also in my old run. They are huge timesavers. In the next part i boost myself again
over a headless spawner which is also crucial for the run. Before i got to the mirror i got hit by a cannon, which is annoying but no need to start all over
again. It was still the best time i could come up with. 15 seconds faster than my old attempts.

Stage 3:
At the ladder i skip getting yet another armor part, further ahead i skip fighting the headless and instead use one of them as a ladder. Encountering the
train on the tracks is as random and annoying as an encounter in a Final Fantasy game. If it hits you, you die instantly. Then there is a big jump from the
tracks to the other side, which is the key part of this stage. There was not much to improve here, same route as in my old run.

Stage 4:
Lots of shooting here in order to proceed. Skipping the mask is impossible afaik (I tried to jump over it via a stump but it always triggered).
Getting the ticket early with the help of a headless is the most important part here, it saves a lot of time. The boss fight went perfect except for the
fact that i went out of ammo 1 second before he was dead. Total improvement for the demon: over 40 seconds.

I choose the demon for the last level because of the dragonhead, the most powerful weapon in the game. No matter who you choose, you always start with
full health and equipment. And also before you enter the boss part, the game refreshes your health and ammo again. So dont be confused there.
Using a headless to hit the lever is the first trick, the second one is a quick jump to the stairs before they go down and before bars block your way. As
you can see i move through the bars at the time they appear. Thanks to the developers at this point again :). When i activate the switches outside i
hesitate a little, simply because i fell down too many times. I just wanted to make sure this time. The big jump over the lava is the last little
shortcut of the game. The boss fight went pretty good, since i didnt run out of ammo with neither the rocket launcher nor the dragonhead.

Thats it, i hope you enjoyed the run :]