Originally developed by Nihon Game for the arcade, the game was ported for the NES and finally released in North America in 1989. As Jacky (and Lee if you play a 2p-game), your goal is to complete 32 one-screen levels (or less if warps are used) by defeating 12 opponents. The game features a wide array of upgrade items and different enemies, of which many have specific weaknesses that must be exploited in order to advance. The game will hardly be included on any top list, but is unique in its own way and is a great contribution to the NES-library. 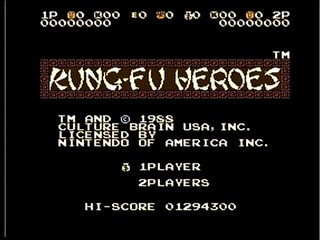 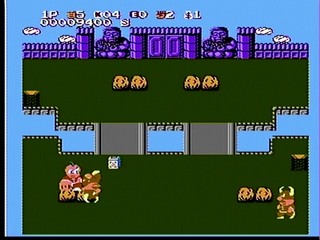 This is my first venture into speedrunning so please bear with me. I chose this game because I played it a lot with my cousin as a kid and I have fond memories of it. Those memories did not serve me well though because this game is highly difficult once you hit 8-1. Below is a list of a few key things to note about this game and this run.

Diagonal Jumping: There are many instances on almost every level where I can save time by diagonal jumping or diagonal miracle kicking. I estimate about 30-40 seconds of saving across the run. Since this is my first speed run I was so focused on the time that this detail eluded me.

Items: There are so many power-ups in this game! I collect what I believe to be the minimum number of power ups needed to complete the game fast. Here are some notes about power ups.

G-ball: This allows you to shoot fireballs from your hands for a short time and is very useful for speed running. It also makes all the enemies run from you which is useful on the later levels.

P:ball: This makes you invincible and allows you to kill any enemy just by touching them. I will use this on level 7-1 and 7-4.

Question Mark Balls/Money bags: Money bags come from certain power up bricks that spawn question mark balls and there is a counter at the top of the screen that counts how many you have. If you have exactly six money bags you can press A+B together and it will spawn a P-ball which is what I use on level 7-4 to speed it up. Sometimes you will get a Red X from a question ball and it will reduce the number of money bags to zero. As far as I can tell this seems random but I noticed it is more likely after one or two money bags are collected on the same level. I made a specific plan to collect six bags in areas where I thought it loses the least time.

Punch Power: There are three levels of punch power and you need level three to destroy some of the enemies. Specifically, in 3-1 with the Vikings.

Miracle Kicks: These allow you to do a powerful attack flip that can kill a lot of the enemies. It is difficult to land though because of the hit boxes. It can also be used as a travel mechanic to go over enemies or obstacles. It is also faster than walking or regular jumping and it can be done diagonally. I collect these where I can so that I have enough but I did not have a specific plan to collect a certain number of them. Since this game has heavy RNG I just use them to avoid deaths or catch enemies when needed.


Scrolls/Necklace: Allow me to kill certain enemies.
Mirror: Allows me to reflect the lighting mechanic on some levels and some of the enemy projectiles if I am facing it.
Sword: Allows me to pull out a sword that has much bigger hit box than anything else and kills most enemies. This is useful against the Unigon.

This went reasonably well. I start on the left side because I need to collect some items from the bricks there and I can use the teleporter to get back to the right side so I can get the G-ball. I tried many different paths here and this one was the most consistent for enemy manipulation. The idea is to destroy all the enemies and shoot fireballs at the spawn points. The enemies do not always cooperate though.

The block I am hitting trolls me a bit with the question ball. Sometimes it spawns on the first punch and sometimes it takes 4-8 punches. The viper enemy at the bottom will also sometimes come up towards me and cover the warp stairs so I am glad that did not happen.

This is where the RNG really starts to take a grasp. I must collect a scroll on the left side and I opt to also collect a few more miracle kicks. I then collect the punch power 3 so I can kill the Viking enemies. That means that all four of them are now spawned and I cannot consistently manipulate the enemy spawns. I grab the G-ball at the top and try to camp the teleporters and spawn lanes and hope for the best. I also pick up another money bag and a different scroll.

I grab the sword and the mirror power up. Then I go into the warp. Nothing exciting here except for the difficult jump over the brick onto the warp key.

I first spawn a power-up ball that I already have. I do this because if an enemy is standing on a spot where a secret ball is hidden and you attack that enemy the secret ball has priority. Meaning it will spawn instead of you killing the enemy. So, it is basically a safety strategy. I then get my money bags up to four which is the minimum I need on this level. I then start to kill the enemies but I take my first death because a viper shoots at the exact time I land. This costs me a few seconds.

Straight to the warp. Nothing to see here.

I get the hidden P-ball in the center of the stage. It is possible to hit it with your first jump back over to the normal floor area but I missed timed it causing an unfavorable pattern of enemies. I do my best to manipulate them and use the teleporters to aid me. I lost about 2-3 seconds by missing that ball.

I get my final two money bags here. Then proceed to kill the enemies. I got too aggressive with the enemies at the top of the screen and I take my second death which is a bad one because it causes me to lose 3-5 seconds. The dragon heads can only be killed by jumping on them and the other two enemies have projectiles. If I touch the white blocks they kill me instantly, so there is a lot going on here.

The floating heads stun you and knock you back and again we have two enemies with projectiles. I manage to not take a death here and finish quickly.  This split is in my top three times.

The fireballs that are falling kill you instantly. The dragons can be killed but I found it not really time effective and it is incredibly difficult. The dragon enemies are the most difficult enemy to kill in the game in my opinion. My strategy is to avoid them and focus on the dragon men. Did I mention that the dragon heads on this level cannot be killed unless you use a P-ball? I go straight for the hidden necklace and then hope the Unigon spawns lower than me.  I mess up the positioning on the Unigon and he kills me. After the first Unigon I kill dragon men until there are three non-dragon men enemies on the screen. I then activate my P-ball from the money bags I collect and try to kill as many of them as I can before they go off the screen. My average is five but this time I got six. The goal overall is to avoid the second unigon completely which I mostly did.

I got a really favorable pattern here. If this was not my fastest split it is certainly within a half a second.

This level is awful. All the enemies have projectiles. The red water is instant death if you touch it. The fireballs in the center are instant death if you touch it. This level has the lighting mechanic and Unigons spawn. I got lucky on the first Unigon spawn and he spawned below me so I could get into the correct position to kill him. I then carefully killed as many enemies as I could. The goal is to kill 11 and open the door before the second Unigon. A back up plan is to be on the bottom and hope the Unigon spawns where you can kill it. I did neither of those things. You can only hit a Unigon near the head I attempted to manipulate the Unigon into a patttern where I could attack him but he just was not having any of that. A Unigon cycle is about 14 seconds.

This was a gold split on this level. The strategy is to kill the enemies on the bottom and hope the new one’s spawn in the middle or top area so that you can keep working your way up and you can keeping killing enemies on after another without having to go to the bottom of the screen. If you get lucky the dragon will spawn below you and you can manipulate its movement by jumping and killing enemies. This level can go south very quickly.

There are a couple of enemy starts on this level. I got the most common one which is ideal and I dispatch of the Unigon quickly. I then kill two dragon men and I got a bit too excited at this point and I made a jumping mistake with my miracle kick. I then try to recover from that and end up wasting a lot of time when I should have just taken the death. I move the enemies to the top though to not affect my spawn point at the bottom. I immediately picked up the pattern though and started killing enemies again. Second Unigon went well but the third Unigon barely killed me because I mistimed my attacks. I am now down to one life and decide to go for the G-ball so that I can clear the doorway and beat the level.

I may improve this someday but honestly it is frustrating and miserable to play.