Conspiracy Entertainment's 2001 GBA non-hit The Land Before Time stars Littlefoot, Cera, Spike and Ducky who you'll remember from children's TV. You've been chased off by a vicious "sharptooth" and must now navigate 5 worlds (how could they have run that far?!) to re-emerge in the Great Valley of destiny. The gameplay is pretty basic with run-of-the-mill platforming followed by boss fights against scorpions, pterodactyls and a T. Rex. 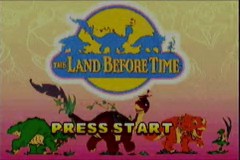 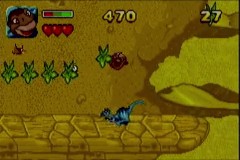 I was just looking for a game to submit for the SpeedRunsLive Mystery Tournament, a tournament of game races where the participants don't know what game they will be competing in until moments before the race. The games to choose from would be submitted by the other participants.

I was just looking through lists in GameFAQs for games to submit to the Mystery Tournament when this somewhat simple 2D platformer caught my eye. The Land Before Time series is a series of animated films that I had fond memories of watching as a kid. I was surprised to find that someone had actually taken the time to make a game based on this somewhat old franchise. (There are actually several games based on the films, but I didn't know about those at the time.)

I looked to see if this game was raced on SpeedRunsLive. One race had been done where someone finished the whole game in 36 minutes. Then I timed my own attempt to complete the game. I finished in 28 minutes. I found a glitch to give my character nearly infinite lives.

From that point on, I realized that I would not be putting this game down so easily. After some persistence and quite a bit of help, I can finally put the game down with the run you see here.

This game is divided into five worlds with four stages per world, except the last two worlds only have three.

Welcome to Hold Right and R to Win: The Game. Not only is this game one of those games where almost every level makes you go right, but also not dashing in this game is REALLY slow. This means that you're frequently holding two buttons in place for a really long time. It can physically hurt to play this game repeatedly looking for the run.

Also, horizontal speed is the same whether you're running, jumping, boosting off of enemies or running through them. Taking damage may create lag frames, though.

You will see at one point, I run off of a platform and jump twice, something I've never seen out of a game with double jumping. This mechanic will be required to make a few jumps later in the run.

This level goes up and makes you go left and right a bunch in the process--a lot of turns to optimize.

There is an early jump where you double-jump from one small platform to another small platform with an arrow. This jump is frame-perfect and it has no visual cue. You spend seven frames at your maximum jump height, but you have to press the jump button on frame three to barely make it on the second jump. You can be a frame early or a frame late and have no idea why you missed the jump. This is a 60-frames-per-second game, by the way. The worst part about it is that only saves about a second over taking the platform to the right.

It's also at this point where you start to see a somewhat wide open environment that gives you the illusion of free roaming, but in reality there may be only one or two ways through the level.

Hold right to win. Oh, I guess there are a few jumps, too.

The first example of QUALITY boss design and, as you will see later, the least broken.

The scorposaur's hurtbox is only in its head--you can jump right through its body if you wanted to. It also alternates between two attacks: a tail stab that hits a platform at the top of the screen and a claw pinch that you have to jump into to get hit by.

The scorposaur is also normally invulnerable during its attacks. Normally. If it is still in its damaged animation during its claw attack, then the scorposaur will still be vulnerable for the duration of that attack. A carefully-placed double-jump followed by holding right as you bounce on its head can set this up so you can kill scorposaur before it launches its next attack. Takes seven hits.

After beating the boss, the screen scrolls to the end and it is PAINFULLY slow. Remember this for later.

World 2 features some tight platforming, blind jumps and several not-hard-but-easy-to-miss jumps that kill you if you do miss them thanks to the water below. You will learn quickly to use certain vines as visual cues.

...and as I say that, this level has nothing to land on below the branches. If you go any lower in this level, there is nothing to catch your fall.

Back to water world we go where we find damage boosts and some of the tightest jumps this world has to offer. I could not tell you how many times I have missed those jumps near the first checkpoint (the dark orb you light up when you touch it).

This boss normally consists of an epic chase where you run away from a sharptooth. Normally. First off, there's nothing "epic" about this stage and it isn't much of a "chase." It also autoscrolls REALLY SLOWLY.

However, if you run into the sharptooth at a certain time as the scrolling starts (I had a big brainfart and almost missed it), the scrolling becomes completely broken and you become free to dash through the level proper. This saves about 12 seconds over playing the level normally. The scrolling is so broken that it carries over to the other bosses.

I offer Cera to the sharptooth as a sacrifice because I am still in need of Littlefoot's lives to set up a boss fight later.

World 3 features a lot of scaling upwards (hence the name Tall Mountains) and quite a few damage boosts through enemies that take too long to go around otherwise.

If there's anything to complain about here, it's that it might have been possible to avoid bouncing on so many enemies and either damage-boost through them instead or wait a little bit for them to get out of the way. Perhaps I thought I would have had to wait too long. I honestly don't remember.

There is a warp in the bottom-right corner of this level that takes you to the top-left corner of the level. However, it's roughly three seconds slower than scaling the mountain quickly.

It's hilarious how busted this megadactyl fight is. There are several things going on here.

But first, let's talk about the characters. There's not much difference between them as far as movement goes. Some have unique special attacks, but attacks are useless in this game. The primary difference between them is their health. Littlefoot can survive three hits, Cera can take four, Spike takes a whopping seven hits, and poor Ducky can only take two hits.

Littlefoot's health makes him more useful for this fight than Cera as you are constantly looking to take damage. Megadactyl carries things from his nest and drops them on you. Every once in a while, he swoops down to attack you and you can jump on him. (As an aside, the lives you carry into this fight can affect some of the things he drops.) If you die as the boss moves left, the boss warps to the left side of the stage and moves to the next step in its sequence. You can save up to five seconds with each warp.

Also, when the boss swoops down to attack, you can normally hit it once per cycle. Normally. If you go to the left edge of the stage and bounce off the boss with a second jump high enough, you can get a second hit on the boss as he re-enters the stage. Why only a double-jump works is beyond my understanding.

Unfortunately, I missed one of the double-hits which means I forfeited about 18 frames from getting all of the double-hits and running to the end of the level--the scrolling is broken from the sharptooth boss, remember. That comes with a risk, however: because each hit forces you to the left, if you don't hold right IMMEDIATELY after getting the final hit, you fall off the side of the level and out of bounds. You can move left and right, but there is no hope of getting back onto the screen, leaving you softlocked. Hope you have enough treestars to revive a character (to get back to the start of the boss), else you'll have to quit the game right there. Considering the risk of softlock, I'm not TOO worried about missing one of them.

Aaannnnnnnnnnnd going down. The exit to this level is on the bottom-right edge of the level so just fall to the end. Very easy and short level.

This level looks a bit mazey, but a couple of leaps of faith make it fairly straightforward. Remember that you can run off a platform and still double-jump.

This is the last "boss" in the run and I like to call it "Special Hitbox Boss"--should be obvious why. Its vulnerable periods are only so long that you can get five hits on the first cycle and three hits on the second. Ten hits kills. Since the scrolling was broken from the sharptooth boss, I can just run to the end of the level.

World 5 is a joke. There are a lot of wide-open spaces available for you to run and double-jump through, allowing you to blindly reach the end of the stage without much trouble. You can fall a long way if you miss a jump, however, and I almost missed one near the beginning of this level.

This level plays out in a similar fashion, except you have to go up first. Way to mix it up, level designers. >_>

The final level puts you in a volcano. There's no boss, but fire does spit out of the sides of the level at points. The big challenge of this level is the flaming boulders of instant death that come down from the score display. If you don't know where they are coming from, they are very difficult to dodge and your lives are very limited. (You can underflow one character's lives to 256 instead of the maximum three lives, but the lives are unnecessary, it takes a bit of setup, and it requires a lengthy minigame to execute, i.e. it's not worth it.)

Hope you guys enjoyed this run. I don't get attached to playing platformers, yet this one hit me in a soft spot that left me wanting to play more. I'm still not sure why. Shoutouts to #mystery on the SpeedRunsLive IRC for organizing the Mystery Tournaments that got me looking for this game. Shoutouts to vyseoflegends9002 for finding the big timesavers in the sharptooth and pterodactyl bosses.