Released in November 2003 for Playstation 2 and Xbox, and December 2003 for PC, Legacy of Kain: Defiance is the fifth and last game in the Legacy of Kain series (to date). Unlike previous installments, where you played as either Kain, a vampire lord, or Kain's lieutenant-turned-wraith, Raziel, both characters are playable in Defiance. Although Defiance received praise for wrapping up unresolved story issues from the previous games, it was criticized for repetitive combat and bad camera angles. 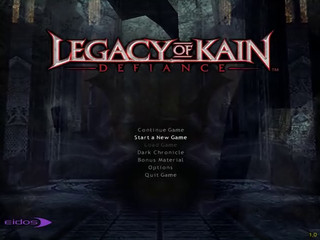 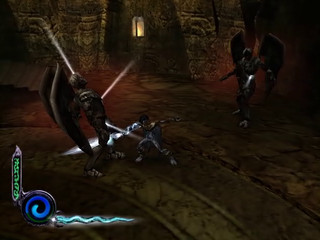 So the run is done and all I have to say it was puuuuure fun to make one myself. Actually I never intended to make a speedrun. My first idea was to start a thread about this game and then someone will take the run and make it. But as I recorded 10th segment I knew that I'll have to do it myself and accepted it.

Anyway first of all I should definitely thank people who made this run possible. I'm talking about SDA staff (thank you for making this site, it's my favourite site of all time ;) ), Eidos and Crystal Dynamics (I thank everyone besides the people that were behind camera...) , RA_Fox and PreddY (they're actually the people that pushed me forward to make this run).

Heh, I tried to comment all the segments but I thought that I just should point out the most mistakes:
- Fights at the beginning of the run (first few segments) are kind of wild because I was learning how to fight enemies (and I didn't had Cadaverous Laceration or Perforate Carcass)
- The reason why I keep on making awkward mistakes is because the camera angle didn't let me to make the right move (for some moves it involves luck because one time the trick works (like opening the door from right or left side) and other it's just that I didn't move into right spot so the camera is in the previous angle and for that I can't jump into right place and so on)
- As for the enemies the worst kind are Stone Golems. I had to really try hard not to get hit but it's pretty much impossible because you can't never expect (until the end of the run when I found out that Cadaverous Laceration or Perforate Carcass (with stopping in the right time) makes them execute "Force Push". Next to them in terms of the worst enemies are the Guardians it's hard to explain how hard they are - You just have to fight them (and do it really fast, not taking your time) other enemies are acceptable but I had my hard time with them
- Besides the enemies there are the Boss fights - Turel, Janos and The Eye. Turel is easy but in terms of finishing him quickly he is the one who decides when the fight is finished (didn't time it but it looked like it), Janos was my nightmare just before I fought him (I kept my old save to train against him from time to time during my segment 15-27). I just had to listen to him and guess from time to time if he wants to blast me into orbit or just catch me. The Eye fight was the most bizarre fight I had in this game. I found out by mistake that if you hit tentacle with the last hit of the 3hit combo it counts as 2 hits and I can get earlier to the Eye. Also during the fight I was hit but I'm 99% sure that he didn't left his tentacle for me to hit
- Too many TK runes, I can't remember why did I kept them... it was kind of mistake
- And for the last mistake - the run itself ;)

All in all I think I'll redo this run BUT first of all I need better computer and that means I won't be making any new run (besides training for my second LoK run - SR2) until I get one.