Legacy of the Wizard, released in April 1989 for the NES, is the fourth mainline game in Falcom's Dragon Slayer RPG series. The game centers around the Drasle family as they attempt to defeat an ancient dragon in the labyrinth beneath their home. Players can switch between five members of the Drasle family, including the pet monster, Pochi. Each member has their own unique abilities and limitations, meaning all of the characters must be used to traverse the game's sprawling, platforming dungeon. Unless you're speedrunning, of course. 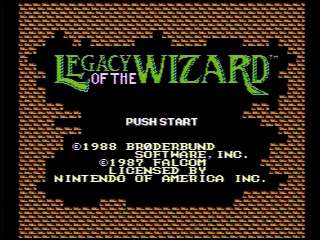 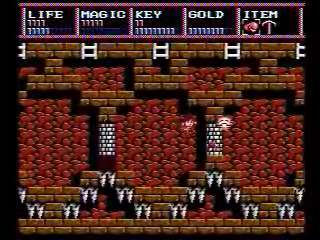 Since the pause-jump trick was discovered, a lot of things have changed. The sister may be used for the father's crown, many of the puzzles in the game can be circumvented, and most of the items are uncessary. A minimum set of items is needed to complete this game: knuckle, orb, mattock, potion, crossbow, and wings. And all these items can be found or bought conveniently along the way, which just about fixes the order in which one would fetch the crowns. Dragondarch's SDA video (2007) pretty much hits on the optimal route (for console -- TAS is a different matter), and i have made only minor adjustments to it here.

The fact is, the game pretty much hinges on finding speed-scrolls. They are randomly dropped by enemies, and they temporarily double (triple, quadruple, ...) your speed. The game takes about 32 minutes to complete without any speed-scrolls (aside from the 3 scrolls found in treasure chests). Each scroll can typically save up to 20 seconds, although the savings can be much less depending on where you pick it up (for instance, the timer keeps running even while at the Inn, the pause menu, or the item-select menu).

Speed-scrolls only appear under certain conditions. You must have 2+ keys, 20+ life, and 30+ magic. The more enemies you can kill under these conditions (with minimal stoppage) the more opportunities you have to pick up a scroll. My main improvement has been to fine-tune the route and to budget the expenditure of magic and life to maximize the number of chances at a random scroll drop. It also required a good deal of patience, as it took about 12 hours of recording to get favorable rolls of the dice that were well above average.

Legacy of the Wizard is a great platformer with cleverly-designed levels and puzzles. All in all, a fun game whether or not you're obsessed with speed. This submission improves Dragondarch's time by over a minute. I hope you enjoy watching it.