The first part of the Kyrandia series by Westwood Studios is a point'n'click adventure in a fairly derivative setting where you occupy the sandals of prince Brandon in his fantastic quest to defeat evil court jester Malcolm who keeps turning everyone into stone. It features all the other fixtures as well, but has a few unique aspects to its gameplay, foremost the super-simple one-function interface. It came out in 1992 and received two sequels in the following two years. 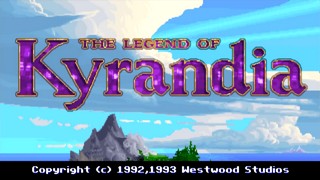 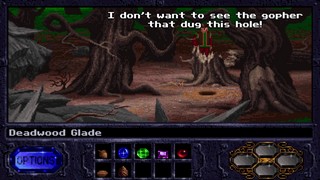 In game controls you can choose fastest walking speed and voice/text options. Text speed also has multiple options. To learn what option is faster I timed the first cutscene (talking wall tree):

In the Temple of Kyrandia, after you have read the note it's faster to throw it in fire than try to put it on the ground.

The main issue in this location and in this game in general is a Birthstones puzzle. It's the reason for segmentation. There are 12 gems scattered all over (literally every outdoors screen) Kyrandia (except Castle Kyrandia). It seems that game place them in 3 or 4 gems chunks after certain actions. You need to place 4 gems on the altar. First and fourth gems are always the same — Sunstone (orange) and Ruby (red). Second and third ones are random every new game.

Segments in this speedrun are from two different new games, in theory you can grind the same luck in a single-segment setting, so it doesn't matter. First thing I did is a run where I tested what gems were rolled on the altar in that particular run. Second turned out to be Peridot (green); third — Amethyst (purple). Good thing about this roll is that Peridot appears in Dark forest every game (fallen leaf transforms into green gem). So all I needed is to grind first segment for Amethyst and one blue gem (for further puzzle) to appear on the screens that are in my routing.

Labyrinth is pretty straightforward. I put Tulip near the cave entrance because there is one place where you need one additional slot for a fireberry (note that in this game just like any other Kyrandia game you can hold one items in your "hand", I use it a lot in this run).

When you reach a cavern of emeralds you should take one, because for some reason game counts green Emerald gem as a yellow gem. Usually you have to look for Topaz (yellow gem) which is also random placed. So, since Emeralds are here every new game, there is no reason not to abuse this feature.

After I get Wisp spell I travel in a wisp form through the labyrinth. Wisp is faster but only this labyrinth has screens that will always turn Brandon back into human form (Fire River, Cave entrace) instantly. You can use Will-O-Wisp spell In further locations, it is faster to travel in this form, yes, but you would have to wait several minutes for the game to turn Brandon back in human form. Since you can't interact with objects in wisp form (you can pick items tho), it becomes a timewaste.

5. Castle Kyrandia and The Big Showdown

Since you can skip last cutscene (and I mean cutscene cutscene, not game engine cutscene), It is considered a controllable event, so unfortunately a runner must wait for all talk main characters do in the end. Run ends after the last cutscene's fade in (you can see DOSbox console line right after).