Taking place years after the original game, Zanthia, a young female alchemist encountered in the first game, discovers the kingdom of Kyrandia is disappearing piece by piece. Zanthia goes on a humor-filled adventure as she attempts to retrieve an anchor stone... but is it all but a distraction? 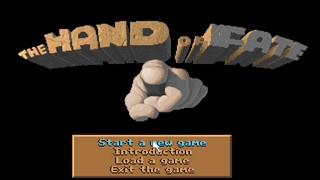 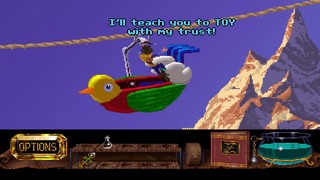 The game is divided in 7 locations so I will address each one of them to explain the key points of this speedrun.

There are multiple ways to cool a fireberry, I used swamp water in Herb's house. Making a crocodile laugh with a feather is slightly faster than giving him an onion. It's possible to drink a snake potion and get a little faster through mouse scene.

I dropped cheese near gates, this is the only significant mistake of this run.

Normally you need to solve the color puzzle with the same pattern you got previously to enter the Inn but it's possible to open the door with a scissors you can get in farmer's cellar. I used taffy and vinegar to make sauce (you can also use beer and orange peel which is slower). When you enter location with giant «fish» prison you can't go further right, so you have to go back to make transitions work (as far as I know this bug is not cause by emulation and was presented on old systems). Mustard Island is skipped by using a magnet on a pile of ropes on ship.

4. Volcania and the Center of the World

You need only two stones in the inventory to get to the Center of the World via an air vent.

You may skip helping guys who try to stop a giant foot.

When exiting Snowman's cave second time, hunter's cutscene is triggered. To skip it you need to return to Snowman's cave and then go back to the hunters.

7. The Wheels of Fate

The Towers of Annoy are probably the most difficult thing in this run due to small hitboxes. I slipped several times when solving this puzzle.

Important: it is prohibited to use GOG re-release of this game for speedrunning purposes because you can speed up cutscenes by clicking left mouse button several times. It is not an original feature of the game.