In the last of this series of PC point'n'click adventure games by Westwood we take control over Malcolm who used to be the bad guy but is now seeking vindication as opposed to what the subtitle would lead you to expect. It made an effort to introduce multiple-solution puzzles but retains the typical quirks the series was known for, with an additional dose of humor mixed in. 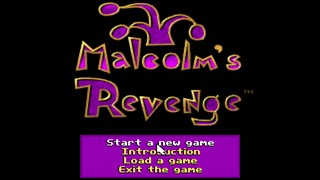 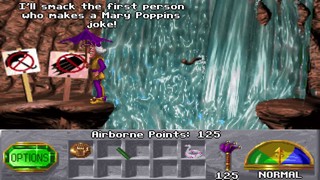 I want to start this run's comments by quoting SDA user Aaron_Haynes: "Kyrandia 3. Take an adventure game, make half the solutions random, the other half arbitrary, and punish the player with death or several minutes of busywork every time they do the wrong thing. In one section, while trying to solve puzzles, you're randomly (and frequently) teleported back to the starting room and forced to play very slow games of tic-tac-toe against a fish queen until you lose. I stopped playing there."

This game is the most RNG out of all Kyrandia games. There are 5 places with RNG puzzles/situations. They are the only reason for segmentation. I did 4 segments because 4th and 5th RNG elements are close to each other.

NPCs that won't recognize you with Half disguise: Duane (bartender), Vince (baths owner) and Darm.

To fool Zanthia you need a Full disguise. Vince however could be fooled by simply lying (setting moodmeter to Lying).

The main goal is to leave Kyrandia Island. There are 6 ways to do that:

1. Getting arrested and thrown into, then escaping, a series of prison situations (too long for a speedrun);

2. Auditioning for the circus for the Dog at the Docks. Three leather balls are needed. Balls are made in the Toy Factory from a shoe, a jerkin or a hypnotized squirrel. It is faster to get a shoe in the garbage pile at the beginning and two jerking at baths or three jerkins. Getting 3rd jerkin is faster than getting a squirrel or grinding RNG for a shoe. Basically, you abuse the baths mechanic where you can steal countless numbers of jerkins. Since Vince is fooled by simply lying you can get three jerking quickly. To get a hypnotized squirrel you would need a sesame seed, nut/nail-on-a-string = timewaste.

3. Trick the Dog with a Mime costume. To get a costume you need an eel (nail-on-a-string to catch it), put an eel to a costume's hood, then steal it from baths. However, Dog will ask you for a sandwich, it is made in Fish Cream Parlour with cream (need two fertilized sesame seeds (sesame seed + eel + water) to summon cows, straight nail to puncture a cream container and a flask). This option is rather time-consuming.

4. Pegasus Potion. You need to trigger Zanthia on Pegasus Landing, then break her cabinet with sesame seed bomb (sesame seed + eel placed in the desired place to destroy and then doused with water). While she's busy, throw an essence of horse (Toy Horse) into her cauldron to get a Pegasus potion. You need Full disguise to do that operation.

5. Portal Potion. You supposed to teleport to Darm (while being in half/full disguise) and talk to his dragon in Normal mood. Brandywine will tell you about Portal Potions. Luckily, there is no trigger bound to talk with Brandywine, so you can skip teleporting to Darm altogether. Simply use sesame seed bomb to break the wall in the cellar to get a portal potion.

6. Two Eels Magic. You supposed to teleport to Darm (while being in half/full disguise), give him a sandwich, them use jester staff three times on him to make him laugh and go away. Give his dragon a hypnotized squirrel to eat and she will tell that if you mix two eels and say magic words you will be teleported to the desired destination instantly. This option is bad due to all the required items you need to get.

My initial plan was to make three juggling balls and break the cellar wall for further Portal Potion use (you will need to leave Kyrandia Island second time with a limited amount of stated methods). It turned out that the game will consider Portal Potion option used even if you just break the wall, so I opted to Portal potion use first time and Pegasus potion for a second time.

This segment begins with a gem stones puzzle. You need 6 bones to force a dog to dig gems for you. I use three-screens jungle pattern to find bones. RNG is pretty bad when it comes to bones, it is pretty rare to collect 6 bones in 2 rounds of three-screens jungle (meaning 6 jungle screens). I managed to get away with only 4 screens, in theory it is possible to make it with only one round (3 screens). Since the run is segmented I learned the gems' placement beforehand. All of the actions are performed while Malcolm is suffering from fleas, but there's enough time to speedrun through this stage without dying to fleas.

3. The Ends of the Earth

Pretty straightforward stage, although I need to mention that sometimes game can lag in a specific way where trigger for something just won't work. Happened to me on that screen where you need to use umbrella to jump to the other side. The text line was triggering but Malcolm didn't want to perform any actions.

4. Fish World and the Underworld

Malcolm is a prisoner to a Fish Queen here. She will call him to play a game every time you go to a new screen in this stage. The «callings» are not random.

At Fish World Dump you need to get 4 coins, 1 newspaper and 4 worms. The "puzzle" is RNG based, so, a new segment needed.

I would say that getting all the items needed in three «distractions» is pretty good. If you get only 3 worms, you can get the 4th one at Perch University — use Jester Staff on student fish and then steal an apple (every apple contains a worm).

After you obtain 4 coins, bribe the mermaid man next to Queen to play a game for you (it will happen two times according to my routing).

Feed lowest fish two worms to make it to a hell reception via a water coaster. First time you are at hell reception place one coin to distract a man (if you don't have coins, game will allow you to persuade him in Nice mood to let you further down the queue).

Good or Evil consciousness choice. Choosing Evil is a bad thing to do because it will force you to leave Kyrandia Island second time via Two Eels Magic, meaning getting a squirrel, but this time you can only get a sesame seed via trading it from Hermann, which is a huge timewaste. Both Good and Evil is not recommended also because of the additional dialogue lines and the requirement to collect 10 bones for Fluffy, which is not present when you side with either Good or Evil.

Prison where three mice are trapped is a really annoying stage to speedrun because you can eat sesame seed or drink water accidentally. And that's a reset.

Again, I used Pegasus Potion to get back to Isle of Cats.

On the island you make two portions of cheese and leave cheese making machine there. Pick only 3 gems. After you returned and dealt with the captain, another place for segmentation comes.

Items you get at The Dump are RNG. Items to get: nut-on-a-string, a shoe, a flisk, a saw, a bent nail.

Soon you will end up at baths, where Hermann runs pawn shop. The items he wants to sell, and wants to buy are always random. He may ask a toy soldier, a toy horse, a shoe, a saw, a leather ball, a machete and other items that you can't possess at this stage. You can buy items from him using gems. Ultimately you want to buy 3 sesame seeds. I had picked up a shoe, a flask and a saw at The Dump. I was extremely lucky to sell a saw and a machete and even more lucky to sell him a toy soldier that I just bought from him (facepalm).

After you gave a piece of cheese to a bartender ask him 2 times to fix a Fish sandwich machine. 2 times. That's important. That way you don't need to wander around several screens, waiting for him to fix it.

Everything else is pretty straightforward.