Released in 1999 for the PC, PS1 and N64 by High Voltage Software, Lego Racers is, unsurprisingly, a racing game set in the Lego universe. As the player you get to customise your own avatar and racing vehicle from lego blocks and race against the best racers in the galaxy across 4 different worlds, with a Mario Kart style powerup system to boot. Plus one of the racers is a Pirate. Yarrr. 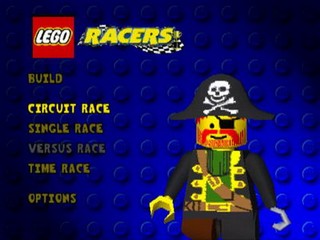 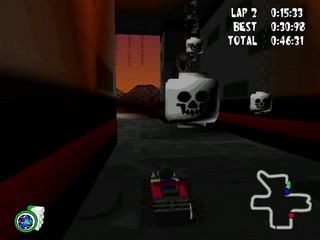 I've been running this game for quite a while, and it's been about a year since anyone mentioned a sub-40 minute time. After running this game on and off, I finally managed to reach that time. Couldn't be happier.

There are two main strategies to running this game. The first is to simply maximize the number of warps I obtain/use in each race. You obtain a warp by collecting a green brick (aka turbo powerup) and 3 white bricks (which are basically powerup upgrades). Each warp alone cuts approximately 5-10 seconds off my time. You can only carry up to 3 white bricks at a time, but there is a small trick with warping that lets pick up a white brick during the warp entry animation, right after you use up all 3 white bricks (I do this twice in the first race). I have a specific strategy to maximize warps on every track, but RNG plays a role in how well I can pull off these strategies; NPC's will often pick up white bricks I need, or exchange green bricks with powerups that don't help me. Also, the last race has so many variations for NPC behavior that the entire race is pretty much a big free-for-all, so I do my best to pick up as many warps as I can there.

The second strategy is to simply not do the entire track. Each track is made up of several invisible checkpoints, and when you drive through them in order and cross the finish line, it counts as a lap. However, you don't actually have to drive through them all in this game. On several tracks, the required checkpoints are close enough together than you can just drive up and down one stretch of track 3 times and win the race in 30 seconds. However, this is not optimal on every track, as the required checkpoints are so spread out on some that it takes longer to do the glitched route than it does to do the track normally. The tracks I perform the glitch on are Dark Forest Dash, Magma Moon Marathon, Desert Adventure Dragway, Tribal Island Trail, Pirate Skull Pass, and Adventure Temple Trial (both normal and mirrored).

As for the run itself, as I said earlier, sub-40 is a goal I've had for a long time. The run suffered from a bit of bad RNG (which can be expected from every run) and nerves near the end, so it is not perfect. However, I am extremely happy with this run, which ended up less than 40 seconds off my sum of best splits. Enjoy.

I always seem to be finding a new retro game from my childhood to suddenly get serious about and do well in. Hi, I'm Greycatmon, former Sonic Riders World Champion and Ampharos Enthusiast. I'm not one, generally, to speedrun anything; at least, a whole game. Racing games has always been my best genre of gaming, as I love the speed and precision to get around any track in the fast time. Legitimately, of course.

A strange case, though, is the fact that I've only been competitive in fictional-like racing games, like Mario Kart: Double Dash!!, Crash Tag Team Racing, and LEGO Racers. Getting a suge back into racing as of late, LEGO Racers has been a fun title to constantly beat Rocket Racer in. :) But the most important part is Time Race mode.

Time Race is different than Circuit or Single Race mode in the fact that the majority of the white and colored bricks have been reshuffled. You will be boosting for all of the tracks, with some additions like using the shield on Magma Moon Marathon, or using the cannonball to open the shortcut on Desert Adventure Dragway. Two of the most important strategies to getting good times in Time Race are the powerslide and warping. Powersliding to get around sharp corners and a well timed warp will place you in the right spot to finish the lap in a faster time.

I am quite happy with my runs. I still need to improve a couple tracks to fully optimize them. I will eventually get to a full game speedrun sometime in the future, but until then, I will continue to optimize Time Race as much as humanly possible.

Not much different at all from RbdJellyfish's time. I got a lucky break on the landing after the flying boost which helped a bit in the run.

This one was fun. Powerslide into the shortcut to where you lose as little speed as possible, saving a bit of time. Brake after you warp so you can powerslide to catch the green brick at the start of the lap.

This one is tough. The section once you get out of the cave to when you warp defines this track. Aim left when you activate warp.

One of the most simple tracks to race on. Main difference is that you need to tilt your car in a way that all four of your wheels aren't touching the sand. It will save you a lot of time, but remember to brake before you drop off into the pond to collect the white brick.

Each lap is split into two sections. The start of the lap to the first warp, and after the warp to the second warp. The pillar section on each lap must have your car be positioned to where you can collect the first white brick and line up with the other two bricks without hitting the wall. Though if you do hit the wall, make sure your car is lined up with the bricks or else it's a restart. This is the first track where boost drifting matters. You retain a bit of your boost speed after the boost ends. Powersliding will retain the speed for a fraction of a second longer, which allows me to take the first turn of the track. The second section of the track must have you in the grass after the first warp. Position yourself to collect the other two white bricks and warp as soon as possible.

My personal favorite track. This track is weird in the fact that I think using the base boost to start the race is better than the advanced boost. I need to test that further. The first lap starts with a flying boost. Remember to collect the green brick hidden behind an ice block on the left, or the shortcut will be slow. The second and third laps after the warp will require you to position your car to collect the green brick when you land. All laps end with a boost that must be a little late collecting the final white brick, or else the game will think that you warped from above your current position.

I hate this track so much. I've hit basically every corner on the track. The video was only a 0.04 second improvement of my time from last year. Anyway, the trick to the end of each lap is to aim right, then immediately powerslide left. Hopefully, you can hug the corner and save a lot of time. After, boost and grab both bricks to end the lap. Make sure you get on all four wheels before you boost for the next lap, or you will lose about 0.2-0.4 seconds of momentum.

This track surprised me on the amount of improvement it needed. The collection of the first white brick saves a lot of time. Powersliding around the corner after the warp saves a bit of time. Make sure you powerslide into the green brick when using your first warp.

Still improving. This track, I think, is harder to master than Amazon Adventure Alley. The collection of the first white brick on the first lap requires every bit of boost drifting, plus using said drifting to get back onto the track as quick as possible, and then powersliding to the upper level to collect the green brick. I saved a lot of time not braking after the warp. A quick powerslide lines me up for the second white brick, then a bit of maneuvering to collect the third white brick, then powerslide again to collect the green brick. I'm still getting the strategy down. If fully optimized, I can see a sub 1:31, but just.

Still the only person to sub the 2 minute mark, this track is near to be fully optimized, considering I started improving this track with a 1:59:51. The start of each lap is essential to a good 1lap. Powersliding on each corner, not going wide on every corner, or even hitting a wall (sometimes, I gained air and hit a wall, which usually causes a restart). The statue area requires a perfect lineup of the last two white bricks. The best time I have achieved on first warp was a 22.0 (the time that is shown before the warping animation starts). After the warp, immediately powerslide as close as you can to the wall. Boost just before the wall on the left is gone. Pray to the stone wheel gods that you don't get hit, grab the green brick, powerslide to the center path, hugging the right hand side wall (to not get hit by the mummy curse). Wait until the lap is completed before using the boost to effectively navigate the shortcut. The third lap is the exception, where you use your boost after the stone wheels and finish the race, taking the center path.

Main difference from my last time (1:11:80), is that I am fixing the second lap. The electrical bolt is the biggest obstacle. That and after I activate warp, I brake and left. When I land, I immediately grab the green brick and boost before I collect the white brick. Manipulate the UFO on the first lap to not get pulled back.