Released in December 1994, "The Lion King" proved to be a surprisingly good movie tie-in. The game features excellent stage variety and closely follows the movie plot. Simba is a dream to control, but this game is no pushover, featuring such obstacles as a ridiculously difficult monkey puzzle, a never ending chase scene, and an incredibly trying climb up a mile high waterfall. 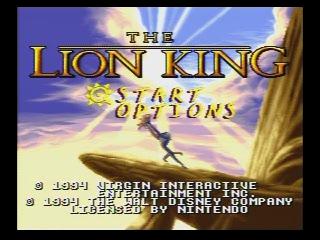 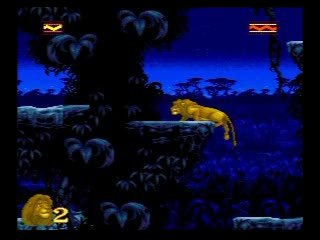 This run is pretty solid and includes many new strats compared to the currently published run,
so I'm satisfied with it for now. If I came back to it I would like to shave off 3 more seconds or so.

Here are some brief notes for each stage:

Pridelands
----------
A pretty standard stage. I go for abusing invincibility frames from bonking the porcupine to get past
the lizard instead of jumping under it because the jump under is very precise and causes a lot of
resets. This is only slightly slower and way easier for the sake of getting runs started.
There are a few frames of delay if you turn around while standing, so I opt to turn around in the air
instead to avoid that delay when I can.

The Elephant Graveyard
----------------------
This stage was overall pretty good. I got a bit of bad luck trying to pass the second vulture with a roll and
bounced on it because it didn't start to fly. I also made a small error by ducking by the third vulture
instead of rolling and ran into it. That was the only mistake in the stage. The hyena fights at the end
have been completely revamped with more modern strats compared to the published run. When the hyenas fall,
you can run straight into them to bait them to bite, which is their fastest animation. They need to attack
twice before you can hit them, so getting those attacks out of the way as quickly as possible is important.
I better manage my HP in a way that removes having to make the hyena in the second phase leap over me,
which is quite slow.

The Stampede
------------
I stand in a specific position to allow me to finish the stage while putting the controller down.
Speedwise, this is the same every time.

Simba's Exile
-------------
The biggest difference in this stage is a faster version of the clip at the very end.
I avoid having to climb up onto the platform after clipping, which is much faster.
Both versions of the clip are frame perfect when it comes to the initial button press,
but the new version is different in that you must only press the jump button for
a certain number of frames depending on which pixel you hit. With the old version,
you can just hold jump. Because I was curious and ran a script for this a few days before this run,
here is a dump of every possible pixel/frame window for the clip:

All clips from X position 687 and higher are clips that land you on top of the platform.
The clip from the old run was any of the three from positions 684, 685, and 686.
The new run does the clip from position 711. The movement up to the second clip from
the first clip, including grabbing the ledge, rolling immediately after, running
straight in to the porcupine versus getting bounced backwards, and turning around on
the ground, is all to manipulate my position so that I know which pixel I need to
jump on. Simba's maximum speed is 4 pixels/frame, so using this movement I get myself
on a path such that I can clip on any of these 4 pixels:

I aim to clip on X=711 but using this setup I give myself a chance at still clipping
if I happen to be 2 frames early and press jump for 2 frames. It also keeps my visual
cue consistent instead of having a different pixel to jump on any given run.
Note that the windows are all 8 pixels apart, so there is always a frame where you
can clip followed by a frame where you can't. Needless to say, a lot of resets happen here.

Hakuna Matata
-------------
This stage is the same as the published run except for a faster waterfall climb.
No mistakes, so no complaints here.

Simba's Destiny
---------------
On the second leopard gate skip, I slap it away from me so that it swipes without hitting me
in hopes of getting to throw it as early as possible. Unfortunately, it gives me a second swipe
before panting, which is a bit of bad luck. It takes me 3 tries to get the ledge grab to skip the
boulder, which is the biggest mistake in the run. If I come back to this, I would like to clean
this up more than anything.

Be Prepared
-----------
This stage has the biggest difference over the published run by far, in that you skip the entire stage
using a clip. If you kill a leopard while it's panting, you can grab and throw it while it is flying away from you.
This moves Simba forward in a way that ignores wall collision, which is the same mechanic
that makes the gate skips in Destiny possible. I land on the platform to the right of the geyser arena
and stand there for a bit, which looks weird and like a waste of time. The tl;dr is that I'm loading only
the first geyser, running its starting timer down to 0 before running into the arena, which causes an iteration
including only that one geyser (they iterate in order of their objects in memory, which will always be their visual
order from right to left unless you die). After that iteration finishes, the other three geysers are ready to start
erupting, so the game resets all of their starting timers using the next four RNG values to determine which one
will start erupting first. I then pray that the leftmost geyser erupts so that I can save two cycles since they will
erupt sequentially from that point. There is a full explanation of how the geysers work here: https://www.youtube.com/watch?v=7F-GyDBkmeU

Simba's Return
--------------
If you swipe above a hyena and stay moving in one direction for a period of time, you can essentially maul it while
still moving forward in the stage, which skips the "jumping off" animation of a normal maul. I do this a few times
throughout the stage. Other new strats include falling all the way down to the bottom hyena first in the tall room
and grouping the hyenas together for a single maul in the last room. There are only a couple minor mistakes in this stage,
including needing to do an extra swipe on one hyena and accidentally getting bit by another.

Pride Rock
----------
This stage is almost the same as in the published run. I did this in the previous run as well,
but skipping Scar's running away animations is done using the same mechanic from the previous stage where you
can maul while still moving forward. If Scar is already offscreen when you run his HP down to 0 on a phase, the game
unlocks the camera immediately.