Released in 1994, The Lion King for NES stays true to the movie where you take control of Simba when he was a cub on his journey to defeat a coconut-throwing monkey and become King of the Jungle. 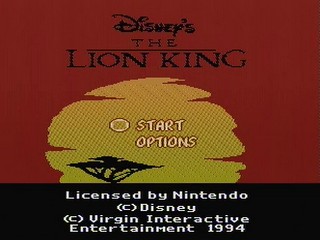 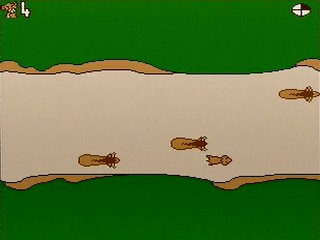 This game is the last officially released game on the NES in europe, and never made it outside of PAL territories.

The reason I pick Prince over King is because hitting the hyenas is completely dependent on RNG.
you have to wait for them to get exhausted before they are vulnerable.
It doesn't change the run at all part from added time and frustration to get 1 extra hit on the hyenas.

The game itself, part form being so extremely dependent on RNG also controls very strangely.
You do not have a 'free' range of movement like in most platformers, instead you move in some kind of grid.
This means that 1 input left or right moves you x pixels.
The problem with this is that you need to be in an exact position to make a lot of the jumps happen,
making a lot of them 'pixel' perfect or better said 'grid position' perfect.
This is why you will see me slowing to a standstill before I make some jumps, because it is crucial I get the exact position.

- Stage 1 'The Pridelands': Rolling is slightly faster than running, which I abuse anywhere possible. Every single jump went perfectly as intended.
A problem with this stage is sprites not loading, but their hitbox still being there. I jump onto an invisible blue bug in order to make the next jump.
Jumping on top of the trees is WAAAY harder than you can even imagine, I have to precisely tap the controller twice to jump in between them.
The hyena has about a 1/3 chance to get exhausted after an attack. I don't get the best possible RNG, but I do get the next best one.
I gave up on having all 3 hyenas in the run being perfect because the chances for this are about 1/27 - and that isn't even the worst case of RNG in the game.

- Stage 2 'The Mane Event': The first swing of the rhyno's tail is frame perfect, it saves less than 1s but it looks cool (and I usually never get that - SwaG).
The rest of the stage is pretty much hold right and autoscroller.

- Stage 3 'Elephant Graveyard': This stage start with a hyena fight, again I don't get perfect RNG, but 2nd best. This loses about 3 to 4s, something I'll have to live with.
(Note the lush background btw). Lots of rolling to save frames here! On the second set of vertical 'stairs' I wait a second.
This tricks the vulture into flying backwards and I can scroll him off the screen, saving me more timeloss and a potential death on the next set of stairs.
Next is more rolling and the screenscrolling can't keep up.. Almost roll myself off the screen (which unfortunately doesn't do anything cool).
And perfect hyena fight! YAY

- Stage 4 'The Stampede': ... Virgin Entertainment didn't give a shit so why should I.

- Stage 5 'Exile': Running into the first 3 porcupines is faster than killing them. Shoutouts to more invisble enemies.
The next 2 porcupines are a nightmare to jump over, I nail both jumps.

- Stage 6 'Hakuna Matata': This stage is the death of 95% of my runs that actually make it this far. The first part isn't all that bad,
part from a near impossible jump where the spider comes down. The problem is the waterfall... The logs that come down are 100% random - both in positioning and speed.
Not only are they random, they also pretty much break the flow of the game and half your inputs get eaten. The actual platforms sometimes decide they have no collision.
Simba's jump height and direction become completely random. This Is Hell. I miraculously get a great pattern and only have to wait for about 5s for the logs to drop.
- Best Waterfall Ever - The RNG is not over however! The ape (which is the final boss, just like in the movie.. right?) throws.. coconuts? which you have to hit back at him.
The intervals of the coconuts are random and it's pretty much random if they hit you or not when you jump on them. The fight goes perfectly.. WHAT? How did that happen.

Anyway.. Realistically there is I'd say 8 to 10 seconds to be saved with better hyena luck. Everything else went pretty much perfect.
I'll leave those 10 seconds to a TAS player though, I'm done with this.