Little Big Adventure (Relentless: Twinsen's Adventure) was released in October 1994, combining a range of action, adventure and role-playing elements viewed from a comfy pseudo-3D isometric vista. The reign of terror brought upon the planet Twinsun by the tyrant, Dr Funfrock, has forced the inhabitants into a harsh dictatorship. There are legends told of the goddess Sendell, and a prophecy that one day a hero will appear and bring freedom once more. "Meanwhile, a young quetch named Twinsen has been having strange dreams." 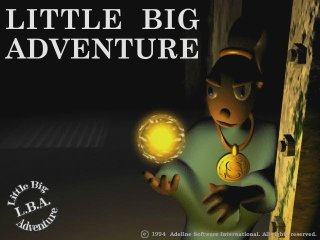 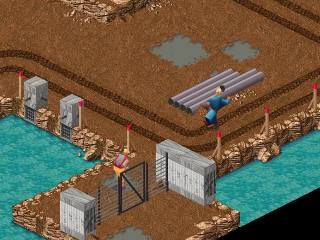 Introduction - I’ve actually practiced a lot and it’s been 7 months since I had the new WR which was (55:05:05). I haven’t submit it because I knew I could do better and didn’t wanted to upload something I would replace soon. I’ll try to make it clear and short while keeping the important stuff. I’ll also add links to guides and videos for anyone who’s interested to learn the run. I’ve nailed every stats apart of the “Funfrock Skip” I’ve missed. There’s also the prison skip, the 1st cycle desert island and last Meca jump I haven’t tried. There’s some wall hit here and there but you know, it’s LBA. Note that I’m playing the french version as the game was originally made in french by french people.

Citadel Island - This is the place any speed runners are doing the most, so in my run I’ve reseted until I got a really good time near perfection. Not much new things in this part, only small improvements like the double box trick which consist in pushing both box at the end of the puzzle. Also the escape from Twinsen’s house is quicker, still all of these are small improvements.

Principal Island - First new thing here is that I use a new quicker path so I don’t have to go at the right of the map and beat the Roboclone. Then goes one of the best time saver strat, the “Zebra Skip”, which consist in walking in a dead spot to avoid the white grobo. You then skip the whole the fence part. At this point we need to leave the shop under 7:00 to qualify the run as a good run to go on. Then I do the “Gas Sign Skip” to skip the second white grobo. Then, I skip the green grobo to make my way quicker to the astronomer house. Then I use the “Corner Clip” glitch which makes me respawn at the Principal Island game over respawn point. After the syrup sequence I voluntary die to respawn and save gas and time. Then I quickly talk to the prisoner with the new “Trench Skip”. Then I do the usual library part with small improvements, it’s also here I get the most of the required money to buy the boat. I’m also voluntary loosing life getting hit by the green guard to die quicker on White Leaf.

White Leaf Desert - Here I could save more time by performing the 1st cycle Desert Island (this consist in jumping before the bullet at on the third sand tile) but it’s really dangerous and doesn’t make much of a big time improvement. In the temple I use the good old “Statue Skip” to skip the first part of Bu. Then in the third room there’s a new glitch where I can jump on the spikes and skip the platform puzzle. Then I jump on the first elevator and throw the ball at the switch to skip the elevator puzzle. Out of the temple I go and get the hidden meca in the rocks and perform the “Die Hard” trick to die and respawn next to the boat and leave.

Citadel Island II - There I go with the “Museum Skip” which is one of the major time saver skip ever found. This skips the whole museum part and the need of getting the jetpack. It consist of doing 2 glitchs back to back which are the “Meca Jump” and the “Moveable object push” glitches explained in the guide below. So here I’m saving a lot of time by increasing the chapters by taking the Sendell’s medallion and the Gawley’s horn.

Proxima - This island is almost like it was before but we’ve actually removed everything not needed, such everything related to getting the jetpack and completing the museum. I also perform a “Die Hard” alternative by drowning into the water to quickly re spawn in Proxima resulting in saving 2 gas and complete the island faster. I also have to point out I’ve lost some time getting stuck with the stones.

Himalaya - Here I skip the whole first mutant factory by using the “Meca Jump” glitch on the door that blocks the entrance of the second mutant factory. Then I do the “Grobo Splash” trick which instantly kills the grobo by drowning him into the water. In the mutant factory I’m running around the red Roboclone instead of killing him. Then I try my best to complete the mutant eggs puzzle which is the only one needed so the Rabibunny talks to you. Mutant eggs on this run are really well achieved but still aren’t 1st cycle, which is really hard and not even needed to qualify a run as perfect. It’s either luck or TAS as there’s a single pixel area which without moving, you can kill all of them, one after the other. Then I do a “Die Hard” on the crab to respawn at the Rabibunny snow hole in the Himalaya.

Rabbibunny Village - I take a secret meca that is hidden in the code, which have been forgotten by the developers, by throwing the ball in discrete mode at the sport you can see in the video. Then I do the third “Meca Jump” over the blue card fence so as you can see I don’t need to get the blue card. After I get the flute and go back at the Rabibunny village, I do another skip called the “Pipe Trick” which consist on jumping on the loading zone of the car to go back to the mutant factory. Then I jump in the dead glitchy corner to “Die Hard” which again brings me back in Himalayi.

Principal Island II - Now I perform the fourth “Meca Jump” over the Funfrock’s fortress fence. After that I got unlucky stuck into the wall, which is something new that never happened before. Then I skip the door glitch by zooming with the zooming shortcut key. Inside of the prison I avoid the green Grobo to spawn by running next to the boxes. I then take a clover and voluntary get hit by the green Grobo and Funfrock so my next “Die Hard” on White Leaf is quicker.

White Leaf Desert II - Usual island but taking 2 voluntary hits by the guard to lower my health even more for the “Die Hard”. After I get the guitar, I take the hidden Meca and “Die Hard”  at the same spot as seen before in the run to leave the island.

Brundle - Here I perform the last “Meca Jump” over the fence to skip the identity paper check required to open the gate. Then inside I take another clover and voluntary loose life on the red Roboclone for my next “Die Hard”. Then from the top floor I throw the magic ball at the computer which starts a countdown until it explode.

Fortress Island - Here I’m not using the magic ball anymore to kill the enemies. I find it faster to kill them with the sword. Still both magic ball and sword are reliable enough to use whatever you like. I haven’t write it before but in the speed run you’ll see me punching 2 times every bunnies that are unlocking doors. It’s actually a the “Bunny Bashing” glitch which cancel the animation. It adds up to the “Animation Reset” glitch family. After the bunny opened me the way I was stressed and made few mistakes in the cave.

Rocky Peaks - On the second screen I save some time by running between the truck and the ennemies. On the third screen I save more time by not killing the enemy by just press the attack button so the enemy dodge. On the fifth screen I go up the ladder from the left which prevents Twinsen falling by getting hit from the red balls. Then I miss the “Funfrock Skip” where Funfrock dodge your attack and immediately fall. Still I haven’t loose a lot of time there but I find it doesn’t look good and I’m disappointed as I never fail this glitch.

Conclusion - I’m pretty satisfied and proud of this run. The new WR is here and ready to be beaten. I do not plan on beating it again myself as I’m pretty proud of this run and will now concentrate on LBA2. There’s still plenty of time to be save if you do a run with kash’s prison skip, perfect inventory handling, white leaf 1st cycle, mutant eggs first cycle, rocky peak mega skip, and of course finding new glitches. Good luck and I’ll be glad to help any newcomers!

Stuff - Any references made in these notes can be found in this guide wrote by Amnesti (http://tinyurl.com/lbaguide). If you still got questions you can visit the speed running forum on Magical Network (http://tinyurl.com/zntw59j). You can also join our LBA Discord server (https://discord.gg/qfJPAmT). Please follow my twitch.tv/FreemanQC.

Freeze - The freeze you see in the video at 30:24 is because I’m recording on an external hard drive which is slower than an internal hard drive. I’ve recorded the run with OBS and I’ve suffered from frame dropping at this place.

Credits - Thanks to my friends Amnesti, Docpaisley, GravyHS and Zebrazilla. Thanks to all my followers that have been there encouraging me to achieve this. Thanks to all of the other glitch founders and the whole LBA community. Without you guys it would have never been possible.