LittleBigPlanet 2 is the 2011 sequel to LittleBigPlanet (duh) on the PS3. More Sackboy, more level building tools, more costumes, more parts, more shouting at your coop partner for not being able to hold onto a rocket, more fun. 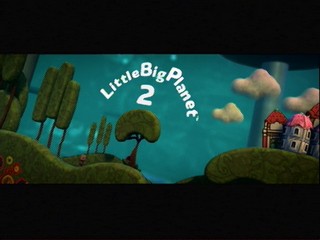 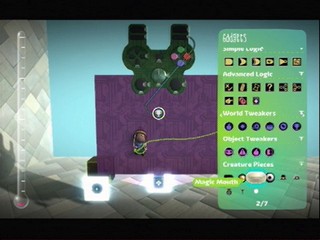 This speedrun uses the Overlord Glitch in LBP 2 to skip almost every level in the game. The glitch has been patched, so I had to revert to version 1.00 by deleting the game data from the XMB, then choosing "cancel" when it asked to update.

Like the LBP 1 glitched run, the first step in this run was to complete the first world to unlock create mode. The first world is fairly straightforward; most of the speed comes from maintaining grappling hook momentum, which comes with practice. There were some mistakes but overall it went pretty well. I kind of wish Da Vinci would shut up though.

Unlike the first game, I don't have to play through a whole lot of tutorials to get the objects I want - I only have to play the first two and click the "Unlock all tutorials" button to unlock all the objects. In fact, I don't even have to complete the tutorials, because it registers as complete if I just immediately leave. After that I go into create mode to execute the glitch.

** I'm not entirely sure of the reasons for the following paragraph, so I'm making educated guesses **
The first thing I need to do is destroy the level entrance as soon as I come through it, so I attach a player sensor and a destroyer to the entrance, then pop in and out of play mode. The reason for this is because when your sackperson is coming through a checkpoint, their body is treated as a regular physics object, but as soon as they stop coming through, they return to their normal state. Destroying the checkpoint with the destroyer settings I use in the run causes the sackperson to stay in its physics object-like state, which is important. The next thing I do is create a sticky cardboard block using a material tweaker, glued to a hologram with an emitter, which emits a controllinator with the R1 button hooked up to a game ender. I want the controllinator to be able to be controlled without entering it, so I set it to be a remote receiver with the "nearest player" tag. The reason I wanted sackperson in its physics object state was so that I can get the cardboard to stick to the sackperson. Because of a glitch, after the cardboard has been stuck to the player, I can remove its stickiness, which will remove the cardboard, but keep the hologram stuck to the sackperson. Now I have a sackperson with an emitter that creates game enders, and the best part is that the glitch stays when I leave create mode.

When I go back to the story levels, it's just a matter of tapping R1 when sackboy spawns, and the level is complete. There is a bit of delay between when the level starts and when you can bring up the start menu, so there is a bit of timing involved, but I won't pretend the rest of the run isn't easy.

The reason I use an emitter instead of just directly attaching the controllinator to the hologram is because the game softlocks when I try to do that. Also, I need to be able to trigger the game ender at my discretion, because when the game ender triggers in the pod, it brings up the start menu with no way to close it (other than to snap a screenshot).

Final time (which ends after I hit the last scoreboard) is 29:39. Again, sorry LBP community for using this glitch.