If your five main senses weren't working overtime as it is, here's a few more! A Choose-Your-Own-Adventure book series called Lone Wolf by author Joe Dever was converted, in 2007, into a digital experience for the digital era inside a homebrewn specialized interpreter called Seventh Sense by the industrious David Olsen. This was neither the first nor the only time, seeing as the immensely popular icosiennealogy (that means there's 29 books, duh!) has been relived on platforms as multifarious as the ZX Spectrum, the iPhone and the PlayStation 4. Something the Lone Wolf books are set apart by is the persistent universe and characters, the plot advancing from book to book like Game of Thrones or The Wheel of Time. 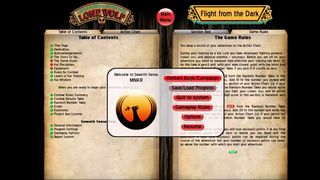 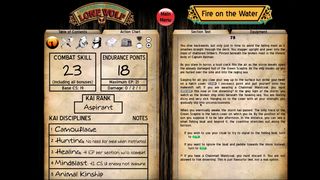 The run starts on clicking "Accept" under "Choose Gameplay Rules". In "The Game Rules" I randomly roll for Combat Skill (CS) and Endurance Points (EP) with results ranging from 0 to 9. Combat in Lone Wolf is based on the ratio of your CS relative to your opponent’s CS with an added randomizer. The higher the ratio in your favor, the more damage you deal and the less you take. Since the opposite is true, runs with a starting CS roll of 0-3 are thrown out. Runs with starting CS rolls of 4 are only considered if the EP roll is 5+, but otherwise starting EP does not matter. Pretty happy about the 9 roll.

For starting Kai Disciplines I pick Camouflage, Hunting, Healing, and Mindblast unconditionally. Camouflage gives multiple chances to avoid combat, and as combat takes anywhere from 10 – 20s apiece, it’s appreciated. Hunting lowers my requirements to route and use Meals, which is good as starvation damage from lack of Meals isn’t something that Healing can cover. Healing is god-tier goodness that recovers one EP per section and thus allows more risk without sacrificing time while Mindblast grants +2 CS against enemies that don’t resist it... the majority of enemies in the game.

For Equipment, take everything. If I had rolled a 9 for the starting currency (Gold Crowns or GC) or rolled a 9 for random equipment I could have avoided combat and saved around twenty seconds. As that’s only a 10% chance, it’s not bad RNG to get otherwise.

Should be done with Book 1 around 1:15 if you didn’t roll maximum starting Gold Crowns or roll into the 12 Gold Crowns inventory start. Easily done sub 1:00 otherwise.

Under Kai Disciplines, I took Weaponskill and successfully rolled the 40% chance to hit 3, 5, 7, or 9. Under Equipment I only took the Shield (+2 CS) and required goodies before starting the adventure. The observant may have noticed the Chainmail Waistcoat that grants +4 EP, but there’s no risk of dying in combat this book with my stats. I’ll have to give it away when the “Green Sceptre” I’m riding on sinks anyways.

Now to talk about getting “masted” or “bridged”. There are sections in Lone Wolf books where anybody, regardless of route or skill or Disciplines or choices, has a 10% chance to get instantly killed. Rolling a 0 on 197 is the first of those chances in this run, but I dodge it. 78 – 337 – 139 – 27 – 312 – 117 – 148 is fast, safe, and in part mandatory due to Hunting. 257 – 181 allows a chance to buy a Weapon. I check my Gold Crowns, realize I’m safe, and buy towards my Weaponskill: Short Sword. If my Weaponskill were Sword, I would have purchased that instead. If I didn’t have Weaponskill or had Weaponskill: Broadsword, I would have purchased a Dagger… having a Weapon greatly improves the odds in 1-shotting the next combat.

All in all, an average run through Fire on the Water at 3:08 start-to-finish. While I did miss the 80% 1-shot on Halvorc and got extremely unlucky in all other RNGs this book, 1-shotting the Harbor Thugs saved so much time that it evened out in the end.

At this point I take the Kai Disciplines of “Not Sixth Sense” and “Not Tracking” until we’re forced to choose Tracking later on in Book 5. At no point do I take Sixth Sense. The Equipment here is fairly lackluster and I’ll have a chance to pick up Meals later, so I grab the Padded Leather Waistcoat for insurance along with the mandatory items and start the adventure.

Evading the Crystal Frostwyrm (Section 169) makes it impossible to get the Silver Helmet (+2 CS), but it’s worth it. Starting combat now takes a full 5 seconds due to the number of bonuses, and despite a guaranteed 11+ Combat Ratio the Crystal Frostwyrm has 30 EP, making it a bit too tanky to guarantee a 2-shot. Picking up the key it drops and then using the Sections to find the Silver Helmet takes an additional 6 Sections (~5s), making the total investment 20 – 25s. Since the Silver Helmet doesn’t average saving 4-5 rounds of combat throughout the run, it’s not valuable enough to chase.

It’s very, very important to not forget Mind Over Matter before the start of Book 5. The Chainmail Waistcoat provides safety as I rolled fairly low on EP.

124. While I could disengage the combat here, avoiding combat now means taking two additional full combats that cannot be evaded. As those enemies have more than 18 EP apiece, there’s a range of 10 – 25s that would be lost here alone by engaging them. 333, any runnable LW will at this point have a minimum of +6 and guarantees going to 220, 163 – 249 – RNG – RNG – 137. The RNG sections can only lead to one section after another until becoming Section 137. The lower the roll, the more Sections are spent getting there.

I grab Tracking as the only alternative worthless, take the minimum mandatory equipment and ready the adventure. Due to losing most of my stuff through intentional routing and the peculiarities of the final boss, Book 5 pays multiple dividends for having higher starting CS.

Surrendering ourselves early is far faster and less luck-dependent than any other options. 176 – 69 – 138 – 4. Fighting this first Gaoler with a Sword is less dangerous and ultimately time-consuming than fighting his counterpart unarmed. With nothing on except Mindshield, I was pretty fortunate to get the three-shot. 165 – 78 – 102 (pick up Gaoler’s Keys) – 150 – 122 – 136 – 186 – 140 – 181 – 14. If my base CS were a little lower, I would have search the chest and fought the Yas inside of it. It’s a likely 3-round combat, but I’d receive a Jewelled Mace that grants +5 against the final boss. With 19 CS that’s not needed. I RESTORE the Sommerswerd, Shield, Padded Waistcoat, Chainmail Waistcoat, Backpack, and one Meal. Unfortunately I missed selecting the Short Sword, which will come into play later.

Book 5 is a monstrously long book, even longer than Book 2. Three minutes is staggering.

Glad to have spent the time routing and running this. RNG was above average. Even though I missed some easy combats and rolls, the ludicrous starting stats and some insane OHKOs covered the losses and made time up as well.