LostWinds made noise upon its release in 2008 by being a WiiWare title that actually wasn't shovelware. The game is about a boy named Toku, a wind elemental named Enril, and their fight against the evil Balasar. The player controls Toku while also drawing lines to control the wind, all to defeat enemies and solve puzzles. 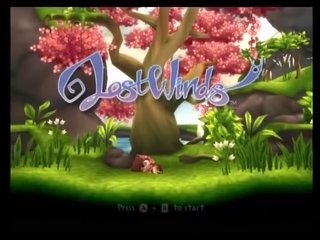 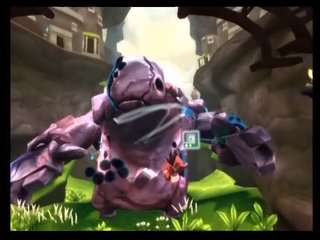 When I completed my 0:21 run (21:53 actual time) I figured there was no way 0:20 could be possible. Well, after re-watching that run numerous times, I found about a minute worth of improvements I could have made. So I decided to come back to this game to get 0:20.

Well, I soon discovered a HUGE sequence break that I had missed before ... going to the slipstream shrine in reverse order using the slipstream glitch. This saved me about 1:20. As I worked on the run I actually found numerous other timesavers I had missed before, as well as another small sequence break. I'm not really going to go in depth about all the details of the run ... I'll let it speak for itself.

The end time is 0:18 and the actual time is 18:31 ... that's 3:22 faster than my previous run. I did have very small mistakes in this run, but nothing that cost more than 1-2 seconds each. Right now I realistically see 18:16 as the fastest time you can beat this game in. I spent so much time making sure I covered every potential trick/shortcut/SB in this game ... there is just nothing left of the game to break. I've literally broken this game down to a pulp. We all know LostWinds is a short game, but come on ... 18 minutes, are you serious?!?!?!?!?

After completing my 0:21 segmented low%/any% run of LostWinds I wanted to do a SS run. But I was afraid, because I thought the best I would be able to manage would be around a 0:25, given the difficulty of all the lift trick parts. A 0:25 SS run would be impressive, especially comparing it to Lord_VG's current record of 0:33, but it would also have a lot of ugly parts.

I completed my first SS attempt in 0:27, and I realized that 0:25 was probably do-able. Once I got 0:25, I was starting to get very consistent with the lift tricks, and I soon realized that 0:23 could be possible if I got up to the first chest fast enough. At this point I realized 0:22 would be impossible, so I set out to complete a 0:23 run which I would then submit. I figured a 0:23 SS run would look really good next to my 0:21 segmented run.

When I got my first 0:23 run, I was quite shocked because I had finished the game around 0:23:30. I was only 30 seconds away from a time I thought would be impossible. Re-watching the run, I saw that I had made about 40 seconds worth of mistakes. I still kinda felt that 0:22 would be impossible, just because I knew a SS run would have SOME mistakes, and I wasn't sure I could get through a whole run with only 10-15 seconds worth of mistakes.

Well, I finally ended up getting 0:22 (end time is close to 0:22:52) ... I estimate I had around 100 attempts at this SS. The nice thing is that it's a very enjoyable game to speedrun, so I didn't really get frustrated at any point running this. I worked on this SS run in hour long sessions. If I didn't get a good run within that hour, I turned off the game and hoped that the next session would have better results. This 0:22 run was actually going to be my last attempt of the day, so I was already warmed up from previous attempts. You should be able to tell that my movements throughout the entirety of this run were close to perfect.

Having completed this run, I can honestly say 0:21 is impossible to SS. Well, I suppose it could be TASed in 0:21 ... but non-TASed, there's no way. You'd have to have perfect execution throughout the whole run with zero mistakes, and only then would you just barely reach the 0:21-0:22 cutoff (watch my run and try to find 53 seconds of mistakes that could be made up). The reason it is easy to segment a 0:21 run is because you get to skip a lot of extra animation which is included in a SS run. If you compared my segmented run with my SS run, I'd say the segmented run is really only 30-35 seconds faster, even though the end time is about a minute faster (21:53 compared to 22:52).

I hope you enjoy this run! I think this SS is twice as impressive as my segmented run. There is such an amazing amount of difficulty with all the tricks and sequence breaks having to be performed all in a SS. Now that I'm finished with the low%/any% categories, I will probably set off to work on the 100% categories ...

Up to 5:45 - everything was close enough to perfect. I didn't get onto the rock correctly at 5:46, so it took me two tries to get this lift trick ... didn't lose any significant time.

6:07-6:15 - the set up and execution of this lift trick was brilliant. This is the hardest part in the game ... about 90% of my attempts ended here or before this point.

6:47 - during my attempted freefall I hit the side of a ledge and lose some health. This part is the first ugly mistake of the run, but I didn't really lose too much time.

13:51 - ok, after learning Vortex, I'm now able to do a new type of lift trick which I call the V-lift. V-lift is the lift trick with the help of Vortex ... it's a lot more reliable than the regular lift trick, but one drawback is that it takes away some of your health. Because I only have a quarter heart left I need to reset my health before attempting this trick. That's why you see my trying to hit Toku with the rock right after learning Vortex. Unfortunately that didn't work, so I had to reset my health using the V-lift ... and this cost quite a bit of time. After resetting my health you can see how the V-lift works as I exit the shrine.

15:16-15:28 - after struggling a little to get the rock into the right position, I perform the V-lift and get up to the ledge. Once on the ledge I'm careful not to get that totem, so I can call this a low% run.

15:50 - there's a sequence break where you can use a lift trick to get up to the switch, but I don't do it, because it only saves a little bit of time, and it's not necessary for a 0:22 run. It's simply not worth the risk.

16:15 - this part messed me up on two previous attempts that would have been close to 0:22. That stupid jumping blob thing ruined my other runs, so when I got to this point for this run, I was terrified. I just missed him, and when I get to the chest I know I should easily get 0:22 because there's nothing really difficult from this point forward.

17:56-19:08 - I found this new route to get to the chest which is quite a bit faster than the route I took in my segmented run. I take things just a little slow during this part so I don't screw up the run ... but not too slow, because I realize that I'm going to be cutting it close to the 0:22-0:23 cutoff.

19:08 - once I open the chest I realize that it will be easy to get 0:22 ... there aren't any dangerous parts the rest of the run. I could afford about 10 seconds worth of mistakes the rest of the way, and I knew there was no way I could screw up that bad ... so I'm able to calmly finish the run without the pressures of being nervous.

21:01-21:04 - this actually scared the crap out of me. You can see I'm trying to use gust to bring the rock over to me, but nothing was happening. I thought for a second that a rock didn't fall down, and that would have been a terrible glitch that would have ended my run. Luckily, the rock was just all the way to the right.