After a first release on the Playstation, Lucky Luke: On the Daltons' Trail was then released for the PC in 2000 by Infogrames. Lucky Luke (the poor, lonesome cowboy who draws faster than his own shadow) is once again confronted by his arch enemies, the Dalton brothers! He needs to get through 11 levels before confronting Joe, the smartest (well, that doesn't really say much), meanest and shortest of the Daltons. It's mostly a platformer, but also contains a few autoscrollers and some miscellaneous challenges such as a bar brawl or a Canadian logging competition. 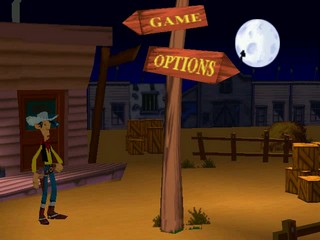 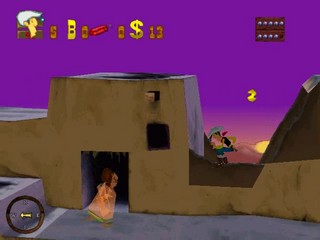 The first level was very well played. No mistakes here.

The boss after the first level was ok, it is faster when he doesn't go two steps to the right in the third phase.

The second level is an autoscroller, yet I managed to lose a second because I shot at the first barrel throwing guy too early.

The third level was overall played good, I didn't do the risky jump at around 6:55. To do that jump you have to be on the very edge of the barrel, if you go to far you will most likely fall into the hole.
I was a bit unlucky with RNG because the second boss did a barrel roll before throwing the third bomb.

The fourth level was played with a slightly changed route which saves some time. I forgot to use my extra health on the final way to the sorcerer which cost about 1 second.

The fifth level was surprisingly good, the fastest time I ever finished this level in.

The boss after that was ok, the first four hits were good but the last one took a bit of time because the boss escaped to the right side. The direction in which he goes seems to be RNG based.

Level 6 was good, I used the safer strategy on the right side but failed to jump into the hole after collecting the third totem part. However there you have another example of the oversized hitboxes of those bouncy objects. The hitboxes for the snakes are oversized too.

Level 7 was not good unfortunately. The first enemy was defeated fast with a pattern I figured out. It does not always work though. The second and third guy avoided a lot of my punches.

Level 8 was really good. Again the fastest time I ever had in this level, I got the early cycles for the two platforms that are on a local timer, there were no mistakes at all.

Level 9 (Mine Cart) was good, a minor mistake was hitting the obstacle near the checkpoint. That only costs about 1 second though.

The first two challenges of Level 10 were good, the boxing fight was ok, I found out that you can often hit the enemy while he is performing a punch. It requires good timing and the easiest way to do it is to use a uppercut which is the fastest punch you can do.

Level 11 was average, some unexpected barrel attacks in the second area. Usually most of the enemies spawn on the roof of the building, this time that wasn't the case.

The final boss was played good. I was lucky to double hit one of the boxes and then hit the boss between the platforms once. Near the end I luckily decided to stay on the middle platform and could hit the boss the last time very early.


Overall a really good run except for the boxing challenges. I am happy with it for now.